There are some souls that are more photogenic than others. They seem to draw the camera and the focus anywhere they go. Supermodels, public figures and celebrities happily pose and exchange smiles with their adoring fans. People can’t stop gawking admirably at them and will do most anything to be in their presence. But there is one type of individual that will pull focus no matter whose shadow they are in. And my absolute favorite type of photoshoot happens to be with supermodels that are a bit furrier than others.

The best “meowdels” in my opinion, happen to be cute kittens. I can’t imagine after meeting Fern and her young family, anyone will argue with that either!

What makes these photos even more heartwarming and gorgeous, is that these stunning shots help highlight some happy transformations. Because Fern and her flawless offspring started their story living on the streets. 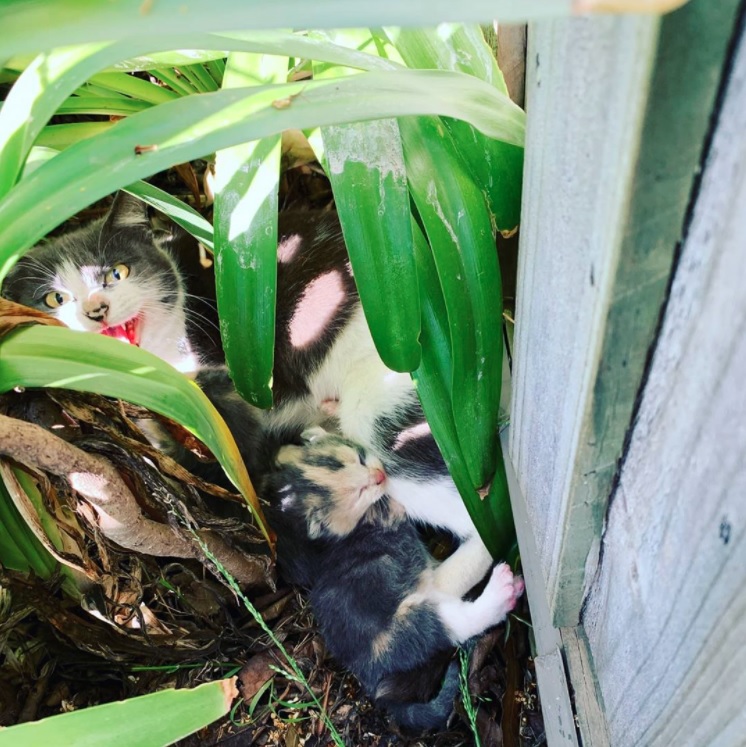 It was in Melbourne, Australia where they were pulled from certain death just last month. Local rescuer Jess Ruf @thekittencarer was informed about a stray feline family that was living on the cold streets. For those of us in the Northern hemisphere, remember the seasons are opposite “down under”. They are just coming into the Spring season out of a cold winter. Kitten season has well and truly started 😿 a lovely lady had contacted me today after finding a little kitten. After awhile mumma cat came back and turns out there is 3 kittens! We are currently trying to trap her so we can secure her and her little babies into care.🤞🤞🤞 Please continue to help educate owners about the importance of spaying and neutering your cat🐾🐾 Stay tuned! Fingers crossed it doesn’t take too long to get these kitties safe🧡 This supermodel family wasn’t going to make it easy for them to rescue though.

And neither was the homeowner apparently. Sadly, animal rescuers deal with unhelpful citizens that don’t take the time to learn how to truly help the animals.

Firstly start with the not so good news. We were not able to trap mumma cat and her three babies, as some conflict was involved. And I don’t want to have anything to do with this. Sometimes rescue can be tough and some people involved can cause issues. Though I am still hopeful we can get mum and her bubs off the streets and stop the breeding cycle. For now we have this sweet little baby who was left behind from mumma. She has had a very stressful day and wanted her 3 babies safe so she abandoned her 4th baby. Thank you so much! 💜💜💜 send all your positive vibes for this sweet little boy. But there was no way anyone could walk away from the family and vowed to return to save them all.

It was September 18th, only 3 days after Lewis was caught, that his siblings joined him indoors! Another local foster and TNR (trap/neuter/return) trapper had been able to catch the kittens. And mama would be next on her list.

What an afternoon!! We found Lewis’ sisters! Mum has proven more difficult to capture. But we have set traps with food so that we are able to reunite her with all FOUR of her babies as well as get her vet worked, social and re-homed. We have also located dad so hoping he’ll go into one of the traps too so we can desex him as well. I cannot stress this enough, PLEASE desex your pets!

Once the girls were safe and warm, the beauty of all the kittens came out with full fluff force.
Meet Hazel…. So, for now the girls have all eaten, been toileted and are now safe and warm out of the rose bush. My arm is covered in cuts from getting in there and grabbing them but I’d do it again a thousand times over

Mama Fern only spent one night away from her precious furballs and was trapped and reunited the very next day!

We’re getting there slowly. This co-parenting thing isn’t her favourite but boy does she love me when I’m giving her food! Watch this space-we’ll be best friends in no time! While the kittens won’t be up for pre-adoption for another few weeks, they are easily winning hearts with their little faces. They were all transferred to the foster home of their trapper @fosterkittensofmelbourne and are thriving. Apparently Lewis is quite the flirt too!

Mama Fern is beginning to warm up too and apparently has a hankering for treats. But she certainly deserves it after giving birth on the streets alone!

Our gorgeous Fern. She has taken quite the liking to ham! So much so, she makes noises of thorough enjoyment whilst eating it! Proud of her progress so far in foster care and thankful she lets me love her babies like she does. We still get hissed at often but each day, it happens a little less Until the kids are ready for their forever homes, I cannot lie and say I won’t be stalking their social media posts. Look at these faces and tell me you aren’t immediately in love just a little bit. Or a lot a bit! Groom Surprises His Bride With The “Purrfect” Gift At Their First Look Wedding Photo Shoot!