A Twitter page called ‘Petfinder Names’ posts hilariously wacky pet names found on the online pet adoption website. The idea came when 20-something Jea found herself browsing Petfinder and decided to share the funny names she came across.

Of course, most people pick rather conventional pet names. For example, the top five cat names for 2021, according to Kitty Catter, include:

Interestingly, Oliver is also the #3 most popular male baby in the United States in 2021. However, it’s the unconventional, hilarious pet names that people can’t get enough of here. It’s kind of like the thinking from the musical Cats that each cat must have at least one particular name that no one could ever guess.

On the other hand, in some cases, it’s incredible to think that somebody somewhere came up with names like these. Judging by the thousands of responses, neither could thousands of others.

For Thanksgiving, Jea and the team shared these puppies with ideal names for a day of feasts. Say hello to these adorable puppies named Turkey, Stuffing, Sweet Potato, and (of course) Cornbread. 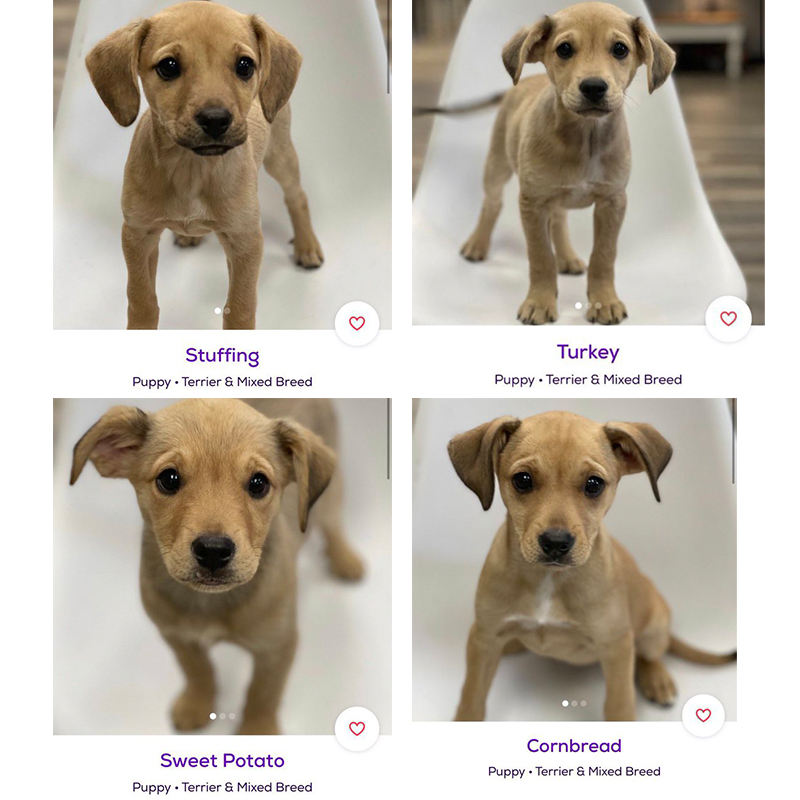 Before visiting all the relatives, we meet Domestic Medium Hair black kittens, Bud and Weed. When it comes to naming pets looking for their forever homes, you want a name that really captures their best qualities. However, someone took this in a humorous direction, naming a Labrador Retriever “A Perfect Dog.” In the picture, they’re even demonstrating their willingness to clean up after themselves with a pooper scooper. Perfect, indeed…

“I did the math and it checks out.” We all know a cat can bring many happy moments to our lives. In this case, someone in Lowell, MA, decided to invoke this curiously, naming this gray kittie Seratonin after the hormone regulating feelings of well-being. This kitty is here to bring you daily doses of love and companionship. Everybody loves cheese, so why not name a kitten after a slice? Well, that’s what happened for Kraft American Single, a kitten that seems bewildered by its new cheesy name. Hopefully, the hilarious moniker earned this kitten a classic loving home. For some, creative names come easier than for others. In this case, it seemed someone in Sugar Land, Texas, was a little creatively challenged, naming three adorable kittens after household furniture. Behold, Chair, Lamp, and Table.

At the end of the day, these names were favorites for many. Then, a kind artist created adorable portraits to accompany the kittens. Hopefully, they have all now been furnished with an ideal home.

here is the trio all together now 👍🏼 some of our faves (as admin) so far!!!

Recently, Petfinder Names shared this Instagram-ready black and white kitty named Girlboss. Somewhere in Belchertown, MA, this cat is ready to come home and maybe start her own business franchise while she’s at it. Somewhere in Golden Valley, someone was evidently an enormous fan of actor Jake Gyllenhaal and sister Maggie. Otherwise, why would they name a 4-month-old Shepherd mix after Jake and 3-month-old after Maggie?

Below, you can see these two puppies, and we leave it to you to decide if they resemble their star namesakes. Plague, War, and Famine – the Chihuahuas?

Meanwhile, Bored Panda and the Daily Mail pointed out some chihuahuas with names dripping with sarcasm. Otherwise, why did someone name three Chihuahuas by the names Plague, War, and Famine? As you consider the chihuahua’s petite faces and tiny blue bows, these names are entirely unexpected. Perhaps, someone out there saw them, laughed hysterically, and decided to bring them all home? We hope so. In another case, someone named puppies after the Seven Deadly Sins.

As we’ve seen many times, cats with seemingly grumpy faces often have sweet dispositions. So, we hope that’s the case with this cat from Los Angeles named Mr. Toast. As you can see, this kitty looks like he’s been through a lot and doesn’t want his picture taken; thank you very much. Done well, a pet’s name can make a big difference in helping them find homes. For example, we recently shared the story of a litter of kittens, each named after a species of chipmunk. In another case, artists painted portraits of pets for adoption, giving a big boost to the chances of finding forever homes. Therefore, if you’re considering the perfect name for a pet or pets, remember how it could make a big difference in their lives.