The street life is not what all cats would choose if they had a say in the matter.

For one tomcat that got a taste of the “good life” indoors, he clearly told his rescuers that he wasn’t going to be a stray any longer. On September 13th, an unneutered male cat was trapped by dedicated volunteer, Ashley, and the Community Cat Coalition. He was caught while they were working TNR (Trap/Neuter/Return) on a large feral colony in Everett, Washington.

The poor fella was clearly suffering from an illnesses.

Ashley was an experienced fosterer and welcomed him into her home. Here, he would get the care and attention needed to heal and eventually be neutered. He was taken to the vet who found that he had and Upper Respiratory Infection and Periodontal Dental Disease. They began antibiotics right away so he could be fixed ASAP.

Stud Muffin is estimated to be between 6-8 years of age. With the average life expectancy of a feral cat only ranging about 5-7 years, he is one lucky boy!

But sadly, the repercussions of that many years on the streets and NOT being fixed, was devastating to imagine.

Jackson Galaxy and Cat Man Chris explain how just ONE unfixed female and male couple can produce over 66,000 offspring in a 6 year period!

Think about how many kittens this burly boy could have fathered in his life!!! =(

Happily, he was now on a different path. He just needed to be shown love and Ashley was the purrfect human to teach him.

Stud Muffin was weary at first though.

He hissed at every meal time and clearly had fought for food for many years. Ashley is a patient soul however, never giving up.

She cautiously approached his cage, placing his food near him and didn’t push for interaction. With ferals, time is key to earning their trust.

He had been given a cat condo where he would “supurrvise” her from his safe zone. Little by little, the hissing ceased. On Sept 19th he was ear tipped, neutered and the reproduction cycle that was left to run rampant was finally ended.

Stud Muffin had slowly began opening up to Ashley and was finally coming out of his shell. 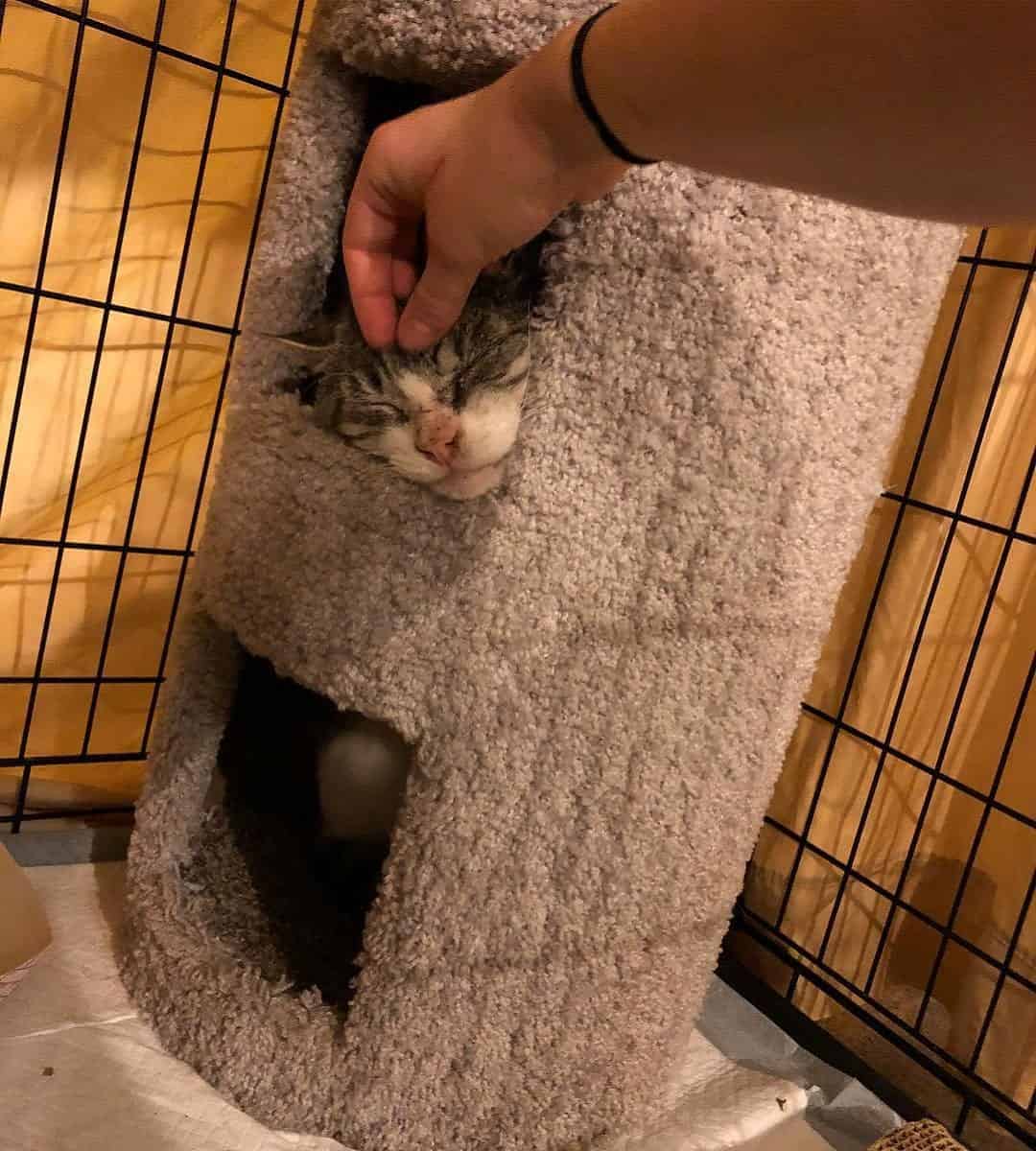 He allowed her to praise him with head rubs, eventually smushing his head into the corner of the comforting condo, purring for more.

Although he was still cautious, his silly personality was starting to show.

In a post she shared on her Youngest Old Cat Lady Facebook page, you can see first hand. “He cracks us up because he likes to sit on his hind legs in the two level cat house and just watch us. He’s winking because he’s very sly with the ladies.”

Stud Muffin began enjoying living in the lap of luxury.

He obviously quickly trained Ashley as to how he preferred his meals to be served! HAHA

The weather is beginning to get colder though in the upper United States and Ashley had to make a tough decision.

If Stud Muffin’s feral cat instincts were permanent, he would have to be returned to where he was found.

It’s the difficult part of the TNR aspect as rescuers never like to admit a cat is better living outside. We do all we can though.

Sometimes providing medical attention, confirming they are clear of viruses and ensuring they cannot reproduce, gives them the best chance at life.

She would make sure that he had a warm shelter for the winter months and releasing him where he was caught, meant he knew how to survive in that area. Since the colony had caretakers, food and water would be provided. Earlier this week, Ashley and Stud Muffin drove to his former home to release him.

She opened the cage door and stepped back to allow him to emerge on his own.

He had other plans though.

We can only imagine that his pleas were his voicing his refusal to leave now that he knew the “creature comforts” of indoor living.

How could Ashley argue with him?

She closed the door, got in the car and drove back home with the once feral cat.

Stud Muffin still isn’t ready to be a full-fledged lap cat, but he is loving reigning over her garage-kingdom.

Being from a colony, he is used to other felines. This means the kittens ALSO trapped from the same location that are temporary residents at Ashley’s, get to be his roommates! In all likelihood, there is a very good chance they are related anyways….eeek.

He does still have a safe spot he can retreat too when their shenanigans get to be too much. His life may be changing for the better next week yet again.

A potential adopter is coming to visit him!

Not only that, another caring person contacted Ashley wanting to cover the adoption fee for whomever wins this handsome cats heart.

He will surely win their hearts as just last night, he allowed Ashley to sit with him during his dinner! A great positive sign of what’s to come for this boy. We’ll certainly be following Stud Muffins story and wish him the best with his new life. Be sure to follow Youngest Old Cat Lady on Facebook and Instagram too!

The feral colony has many more cats that the teams are working on trapping and caring for.

Numerous females have been caught, spayed and found to have recently given birth in the last month. These felines were re-released so that they could care for their newborn kittens. Volunteers are continuing to keep looking for these needy families. They will be TNR’d, which will all certainly require funds for sterilization and possible medical issues.

With winter approaching quickly, they are in high gear saving as many as they can.

If you would like to help their deserving cause, there is sadly never a slow day in rescue, ever-growing vet bills and donations are always greatly appreciated!

Donations can be sent to any of the following: