While driving late at night, you need to be alert to wildlife that may not realize they’re entering a rural roadway. They can dart in front of your vehicle, causing accidents and often losing their lives. Other times, you may see something out of the corner of your eye as you drive, peeking out from the darkness. The reflection of beastly eyes glow from the brush, conjuring up spooky sensations. But for one woman, she never expected to come across a dreadful scene on the side of a Florida road. Certainly the six kittens in the abandoned carrier never expected it either. Because there sat a mama cat, waiting next to a carrier that held her six kittens…and that was taped shut!

And it was the middle of the night when the family was finally discovered. Thankfully, she stopped and was able to rescue the entire clowder of them.

The kittens were found at midnight on the side of a road, the door was not on the carrier, but was taped. [Mama] stood by the carrier that held her kittens. A very kind human being stopped to check the carrier out and found that there were these gorgeous kittens inside! Thankfully, she decided that she could not leave them there! She put mom and babies in her car and kept them safe for the night. The next morning, a volunteer for the rescue organization A Kitten Place rushed to pick up the family. They had learned of the situation and knew that they could ensure they were ALL taken care of. But with year-round kitten season in Florida, transporter Babs Brant went a step further. She agreed to foster the family until the rescue had space for them.

She creatively named what may be one of the most stunning little feline families there every was! The gorgeous mama cat was named Sable, and her six kittens were dubbed “The Royal Family”.

We are proud to present their “hissy-nesses”; The Royal Family – Anne, Harry, Meghan, Victoria, Kate & Will. 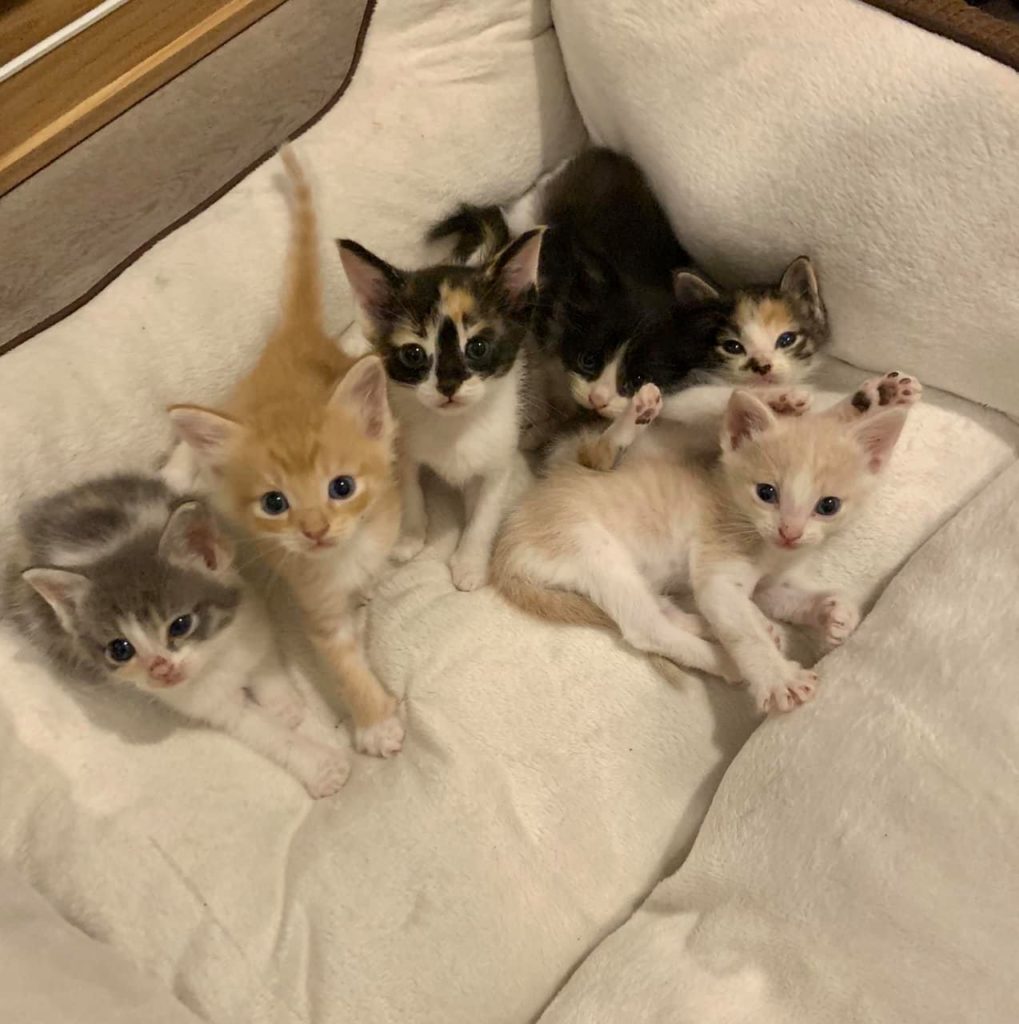 I definitely don’t sense any friction between these siblings. Although they may need a bit of help on their kitten skills still, their photo shoot game is ON POINT! The kittens began developing their own personalities, which were all too darn adorable. Even sassy Meghan apparently, who they call “the wild child”. Once space opened within the rescue, the organizations co-founder and President, Michelle Meldrum Bass, welcomed them into her home.

Michelle may have quite a “full court” already, but with a doting mama like Sable, the six kittens were already in good paws.

Sable herself is a young cat; a kitten herself practically. You can certainly see by how she plays with her offspring with a youthful vigor. There was nothing feral or stray about this beauty with the GLORIOUS tail!

It’s a wonderful thing she’ll never have to have babies again. And neither will any of the kittens, because they were all spayed/neutered before being adopted. Which led to an amazing discovery on little Victoria! She had a black “splotch” of fur on her belly, but when shaved for her surgery, they were amazed to see it was so much more than that.
She’s got a little heart on her belly!!! Mine may have burst when I saw this. Not only is this one of the most loving and friendly families EVER. They wear their hearts on their sleeves…stomachs…you know! As far as fairy tale endings, this rescued family ALL have been adopted, even sweet Sable.

I can guarantee their devoted human subjects are going to be honoring their new adorable aristocratic rulers for years to come.
All because one driver took notice while travelling and stopped to investigate the taped carrier on the side of the road. Kitten Found Screaming On Roadside Alone; Look At How Happy He Is Foster Care Now!