We love cats of all kinds, and moreover, that includes illustrated ones too! Many of us have a special place in our hearts for cartoon cats. Do you have a purrsonal favorite? Mine will forever be Garfield. Check out our fun list of famous cartoon cat characters below. I think just about every cat lover is a fan of Garfield. Originally based off of a comic strip from Jim Davis, the grumpy tabby cat with lots of sass first premiered on June 19, 1978. This lasagna-loving orange tabby cat captured the hearts of cat lovers worldwide. Since his debut he’s had his own comic series, animated television show, and a handful of movies. Oh, and don’t forget, LOTS of Garfield inspired merchandise.

Interesting little Garfield the cat fact for you? Creator Jim Davis originally planned to focus the series around Garfield’s owner, Jon. But after shopping the comic series around to several agencies, Davis was told on numerous occasions to have the series focus on Garfield, not his owner. As you can see, the rest is history!

Want to know more fun facts about everyone’s favorite cynical cartoon cat? Check out this article on 20 Things You Didn’t Know About Garfield This little guy is a close second to Garfield for me. After all, he’s a swashbuckling cat who wears boots! Modern day audiences fell in love with Puss in Boots in the Shrek movies, voiced by none other than sexy Latino Antonio Banderas, but Puss in Boots cemented his name in cat legends long ago. (See, he is a cat of legend, after all!)

Check out the original artwork below from 1695! The famous tale of Puss in Boots has been renowned for centuries with various renditions, but the original story of this cartoon cat tells the tale of a cat helping an impoverished master attain wealth through its trickery.

Whatever the version, we love all types of Puss in Boots variations! 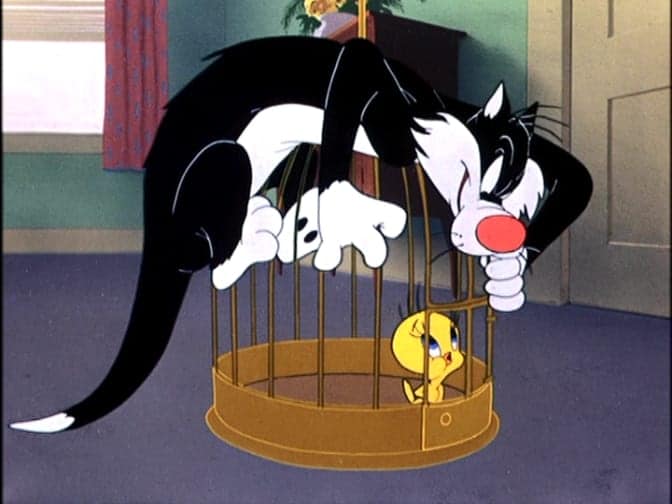 Sylvester J. Pussycat, Sr. first appeared on May 20, 1939. This tuxedo cat simply known as “Sylvester” was one naughty boy, constantly in search of Tweety Bird, Speedy Gonzales and Hippety Hopper. During the golden age of animation, Sylvester made 103 appearances in Warner Bros. shorts from the years 1945 to 1966.

He is beloved by many for his prideful attitude and tenacity to never give up, despite often turning up short in the end. In terms of rank, he was the 4th most featured Looney Tunes character, with Bugs Bunny, Porky Pig and Duffy Duck leading the classic animated pack. This happy tuxedo cat first appeared in the Feline Follies short in 1919. At the time of his debut, during the silent cartoon era, Felix was widely popular before he his original success came to an end as cartoons with sound premiered in the late 1920’s.

In 1953, Felix made his cartoon return, but this time with sound and a new look which featured longer legs! Even today, there is Felix the Cat merchandise available for Felix’s many fans. I think we all remember the classic wall clock with the shifting eyes and swaying tail! Although he started as a fictional print character featured in the 1865 children’s classic Alice’s Adventures in Wonderland by Lewis Carroll, this pink and purple Disney kitty is a favorite of many cartoon cat lovers across the globe. Know for his big mischievous grin and squirrely antics, it is believed that the Cheshire Cat is loosely based on a British Shorthair cat.

Fun little Cheshire cat fact: It is not 100% clear why Carroll named this character ‘Cheshire Cat’. “To grin like a Cheshire Cat” was a common phrase in Carroll’s day. Its origin is unknown, but it may have originated from a sign painter in Cheshire. For example, he painted grinning lions on the signboards of inns in the area. While the name “Tom” still sits high on the list of popular names for felines, Tom of Tom and Jerry fame is adored by many still to this day. Thomas “Tom” Cat was one of the title characters created in 1940 by William Hanna and Joseph Barbera. The blue/grey domesticated feline was known for always being at odds with his rival mouse, Jerry. At the time, the rival pair were seen as rather violent. On the other hand, that which would likely not turn many heads today, certainly did back then!

In the various plots of each short, the focal point of each would center around Tom’s many failed attempts to finally capture Jerry. Audiences were enthralled with the mayhem and destruction that ensued in the process. In many of the shorts, Tom would rely on various weapons. He commonly uses axes, hammers, firearms, firecrackers, explosives, traps and poison in attempts to kill Jerry. And little Jerry would resort to violent means as well to keep himself from being captured. Maybe doesn’t seem like such a big fuss today, but remember this was back in the 1940-50’s! There have been several successors to the original Snowball the cat of The Simpsons family fame. But many of us know the “OG Snowball” which first premiered in 1987. We will leave out the cause of death for Snowball and his successors as their exits were a tad morbid. However, his legacy still lives on even now in the animated series. Scratchy, of Itchy and Scratchy, is another famous cartoon cat featured on The Simpsons. These two rascals are an obvious parody of Tom and Jerry.

Honorable mentions (for domesticated felines, not animated big cats): Oliver of Oliver and Company, Duchess of The Aristocats, Figaro of Pinocchio, Lucifer of Cinderella and Fat Cat of Chip ‘N’ Dale Rescue Rangers