“Old Man” Cat Rescued From Streets; After Cleaned Up, Found To Be Only 4-Years-Old!

A heartbreaking post was added to a local animal rescue page in Southern California on November 1st.

The “cat signal” had been lit and this boy needed someone to come to his rescue.

“14-year-old shaved intact super sweet male. He has an open abscess on his neck and what looks like chemical burns or some kind of oil all over his body. His teeth are a mess and his tongue is swollen. He seriously needs some attention.” A woman had found him and thankfully brought him to a local shelter.

He was in very rough shape and due to his scraggly appearance, they dubbed him “Old Man”.

The shelter staff began treating him with antibiotics and eye ointments.

Old Man also appeared to be dehydrated, but fortunately, he was drinking lots of water.

When rescue organization, Love Your Feral Felines saw the post, they immediately jumped into action.

Pulling him from the shelter the very next morning, they immediately took him to their vet.

His wounds were cleaned and they found abscesses on his neck and in his mouth.

Blood work was done but would have to be repeated to ensure the infections were going away. He tested FIV+, not a death sentence, but it did mean he would heal slower.

They also found that he was actually only about 4-years-old!

The poor boy had led such a rough unknown life on the streets that he’d looked a decade older than he was.

But the number 14 has special meaning for the Love Your Feral Felines organization, particularly the founder, Christine Hubbard.

The cat that had set Christine on the path of feline rescue had recently crossed the rainbow bridge.

Her beloved Khalil would have been 14-years-old in October. Photo courtesy of Christine Hubbard ~ The one and only, Kahlil

So Old Man was renamed “Fourteen”, in honor of Khalil and his originally misperceived age.

Christine also pledged to match donations up to $500 when raising funds for the needy boy.

Fourteen has a long, and expensive, road ahead of him. Taken into a loving foster home to monitor his health, they awaited the results of his blood work as he stayed on “bed rest”. (Something you THINK a cat would be happy to do!)

His foster reported that he ate really well despite his sore mouth.

However, when the first test results came in, the prognosis was not as they’d hoped.

Fourteen was anemic and his infection was not clearing up, even with antibiotics. The vets became very concerned as his white blood cell count was extremely high. His red blood cell and platelet counts were both low.

This could be from blood loss or they fear, is some kind of bone marrow disease.

He was given pain meds, a new antibiotic and kept at the vet until they were comfortable he was stable.

None of this would have been possible without the LYFF supporters who’d donated to his care. Even though he isn’t feeling well, Fourteen continues to be very affectionate, seeking attention and purring up a storm.

“The vet called this afternoon with an update on Fourteen.”

“A pathologist looked at the blood results and they are inconclusive so we’re going to run another test and should have results tomorrow. They said he is looking better today – he is eating drinking and using the litter box. He looks bright eyed too.”

“They still have him on antibiotics and pain meds and we need to find out more on his condition but today is a good day! Keep your prayers and hearts with Fourteen and we should be able to get everyone another update tomorrow <3” 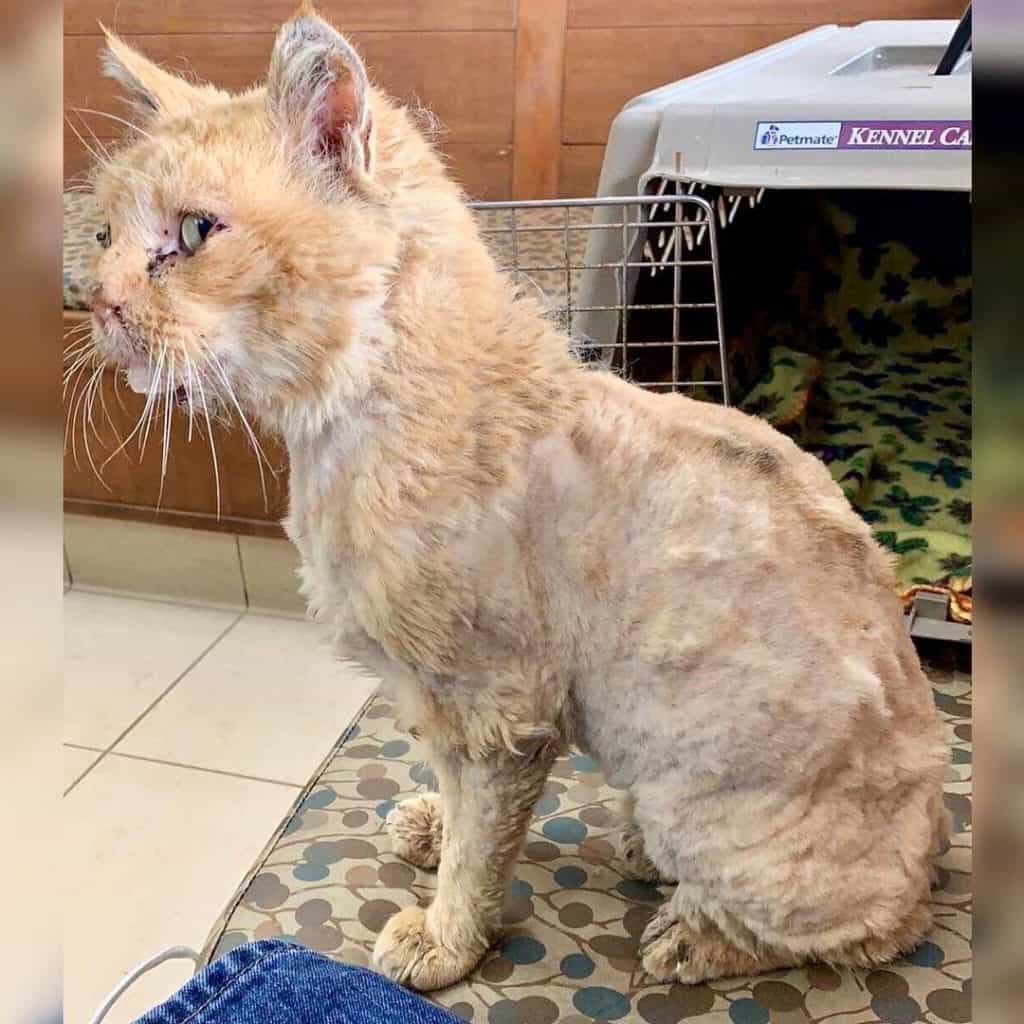 The dedicated rescue organization is continuing to raise funds for Fourteen’s medical expenses.

Donations can be made on PayPal @ loveyourferalfelines@gmail.com or mailed to: