VERY Pregnant Cat Rescued From Streets ~ Not Only With New Babies On The Way, But 3 From Previous Litter!

While writing an article on new mama cat Fable who was winning hearts over at Kitten Academy, we learned of another special mother cat…Verse. Verse was found as a stray by a local rescue group that Kitten Academy foster for, “On Angel’s Wings”. This was just in the nick of time because she was VERY pregnant! 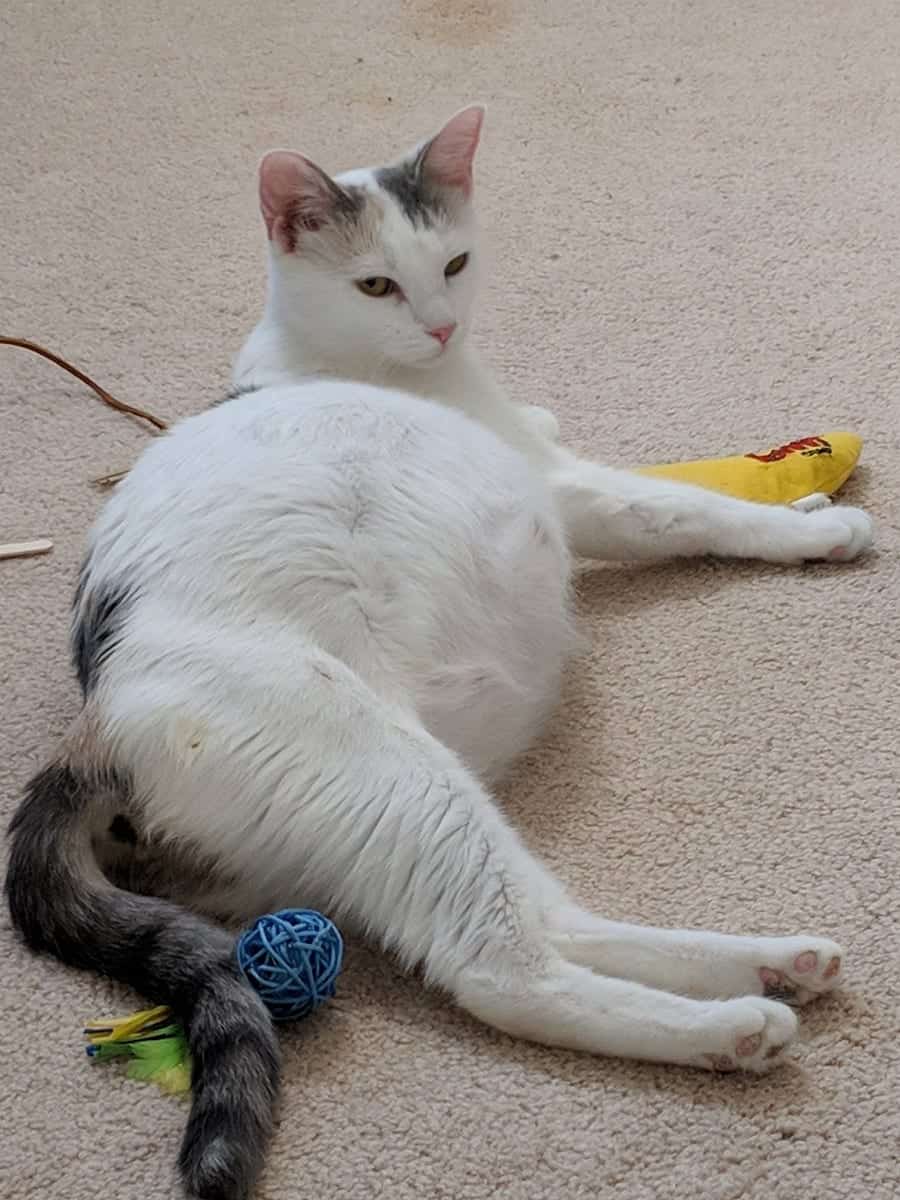 Not only was the beautiful feline carrying a heavy load, she also had 3 kittens from a previous litter still with her!

The trio were about 3 or 4 months old. Since a cat’s gestation period is about 63 days, poor Verse had been pregnant 2 times already just this year alone, only months apart! That’s just what we KNOW of.

The worn out mama deserved nothing less than a safe, indoor home to have her last litter and then be spayed. In a first for Kitten Academy, they not only took in Verse and prepared for her babies, but opened their hearts to the older kittens too. When no other fosters were available, they couldn’t allow the them to just go into the “caged environment” at a shelter.

The entire clowder was welcomed into the academy.

They firmly believe that at some point, Verse had been a house cat. She was extremely loving and friendly almost immediately. As for the kittens being around humans, they explained:

“Her older kittens probably were not, because they are quite shy. They are certainly not feral – just extra cautious and shy.” Since the older siblings had just received vaccinations, they needed to be separated from Verse and her developing litter. Thankfully, they all checked out healthy though.

But by the time they were all rescued, the previous litter was past the point of relying on Verse anyways. They got to happily spend their time in the Kitten Academy master suite; no complaining from them! After a visit to the vet, they learned that the extremely rotund Verse still had almost a month before she was due!!! At her size, they anxiously awaited the day for an accurate ultrasound to be done.

When the day finally arrived, they were shocked to discover that she could have as many as ten kittens! At a follow up appointment with an X-ray to confirm, they received a definitive count of 9 babies. Still quite a daunting expectation! The additional good news from the vet was, “that Verse and the kittens seem perfectly healthy and recommends allowing her to deliver naturally at home. She doesn’t anticipate any issues.”

Now, each day, the Kitten Academy Faculty and their fans around the world monitored Verse carefully.

She prepared her own birthing box with an experienced eye, accepting what the humans had presented to her.

With 24-hour webcams available online, they literally had eyes all over the globe to make sure the very pregnant mama stayed on track. Updates on Verse’s progress were posted on their Facebook page and website.

Stanza, Prose and Meter were starting to come out of their shells more and more. They had their sterilization surgeries on September 4th, and were soon ready to find their fur-ever homes. Dedicated subscribers to their webcams, and we’re talking EXTREMELY dedicated, spent over 9 hours watching and supporting a very pregnant Verse throughout the birth of the kittens. One ameowzing woman helped further by recording the times each kitten was delivered!

Fate intervened 5 days later however, and Kitten Academy shared some heartbreaking news with their followers.

The tiny runt of the litter tried his hardest to hold on and even with their support, love and experience, some things are just out of our control.

Kitten Academy has a “No Sad’s Policy”; something they stand by as their one official rule.

What it means is that we can’t stomach hearing about cats and kittens in distress, even if we know the story ends well. And therefore, we never want to tell those sorts of stories. Even if our kittens come from a rough beginning, the story we want to focus on is the wonderful time they have at the Kitten Academy and thereafter. Our mission is to share happiness in this time when it seems people need it more than ever.

Due to the nature of what we do, though, sometimes, sad things may happen. In those cases, we’ve decided that we will just tell you the facts, in the least exploitative way possible. We’re not here to play on your heartstrings with tragedy, just to inform you of the news, even when it’s unfortunate.

So to cheer you up, here is good news, videos and smile-inducing pictures, introducing Verse’s new babies!

So, still not enough heart-bursting, adorable neonatal cuteness for you?!

Try not to “awwww” outloud while watching a video of the roly-poly kittens.

Still not had enough? How about this? Or maybe a few little peepers?

Be sure to follow Kitten Academy and their amazing humans working to help save (some very pregnant) cats and kittens!

Everything else you want to know & to apply to ADOPT A CUTIE!!! =) https://kitten.academy/