Four months ago, an injured kitten was found sitting alone in the middle of a dark road in New Port Richey, Florida. Fortunately for this feline, it was a caring woman that stumbled across his path at 2 a.m. on June 24th.

The 8-week-old kitten was NOT doing well and if left to fend for himself, would not have made it. She brought the suffering kitten home despite the visible injuries. Happily, he was still eating, drinking and showing affection. During the overnight hours, she reached out online to see what could be done until a vet was available.

The plea was seen by a vet technician who contacted her friend, Dani Giroux, affectionately called “Dani The Cat Lady”. Dani has been fostering neonatal kittens, TNR’ing, and rescuing cats for years. They knew the little boy would need a caring foster home if he was to survive. Dani reached out to the woman who sent her photos of the baby boy. She was absolutely shocked at what she saw! Never in all her years of rescue had she seen something like this. Both his eyes were scabbed over, infected and bulging from his head, as though he was wearing goggles. 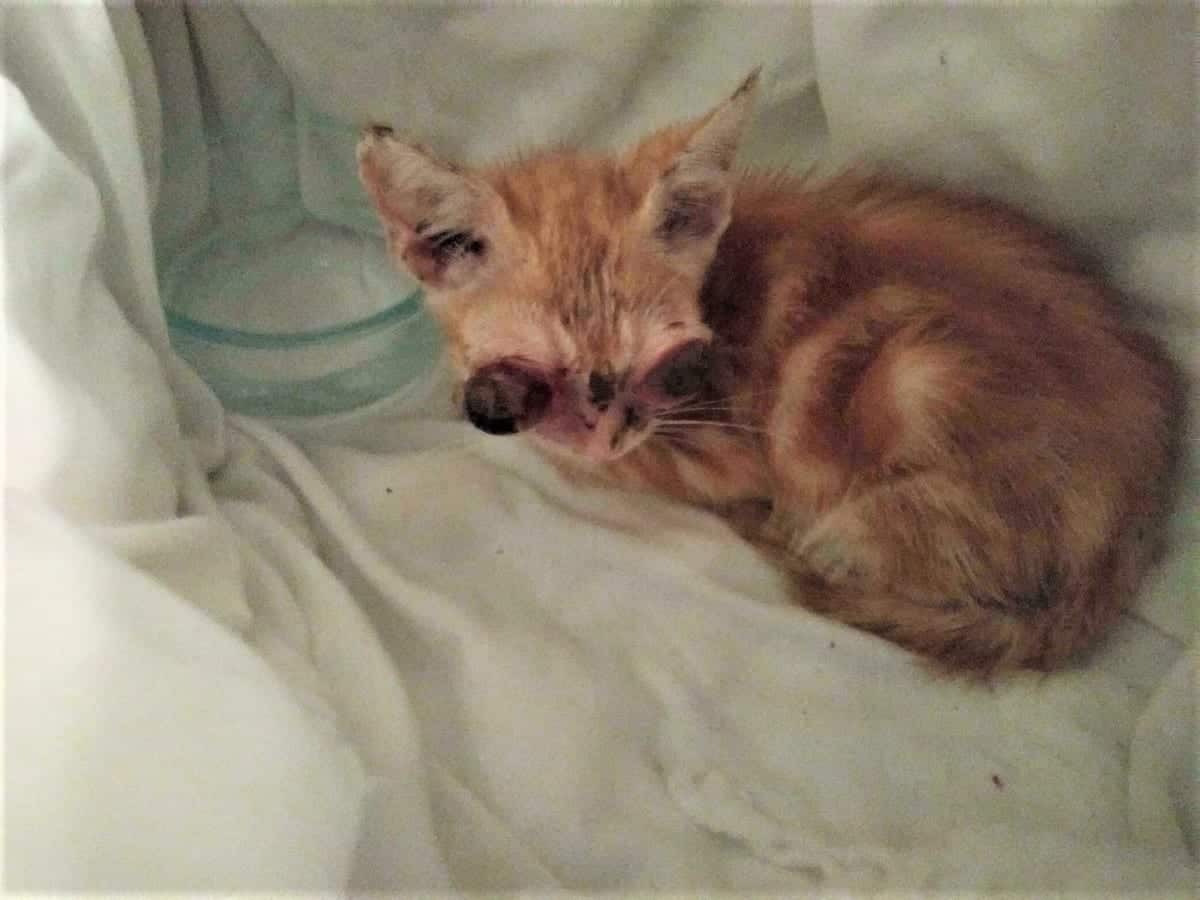 Dani has been fostering kittens and is a weekly dog care volunteer for the Suncoast Animal League. They are a non-profit, no-kill, no-time-limit animal rescue agency helping domestic animals and wildlife. Contacting the owners of the agency and the cat manager, Larissa, she asked if they could assist.

They immediately agreed and began calling him “Richey”. Larissa made arrangements to pick up Richey and he was taken straight to their vet, Dr. Pola at Enterprise Road Animal Hospital. 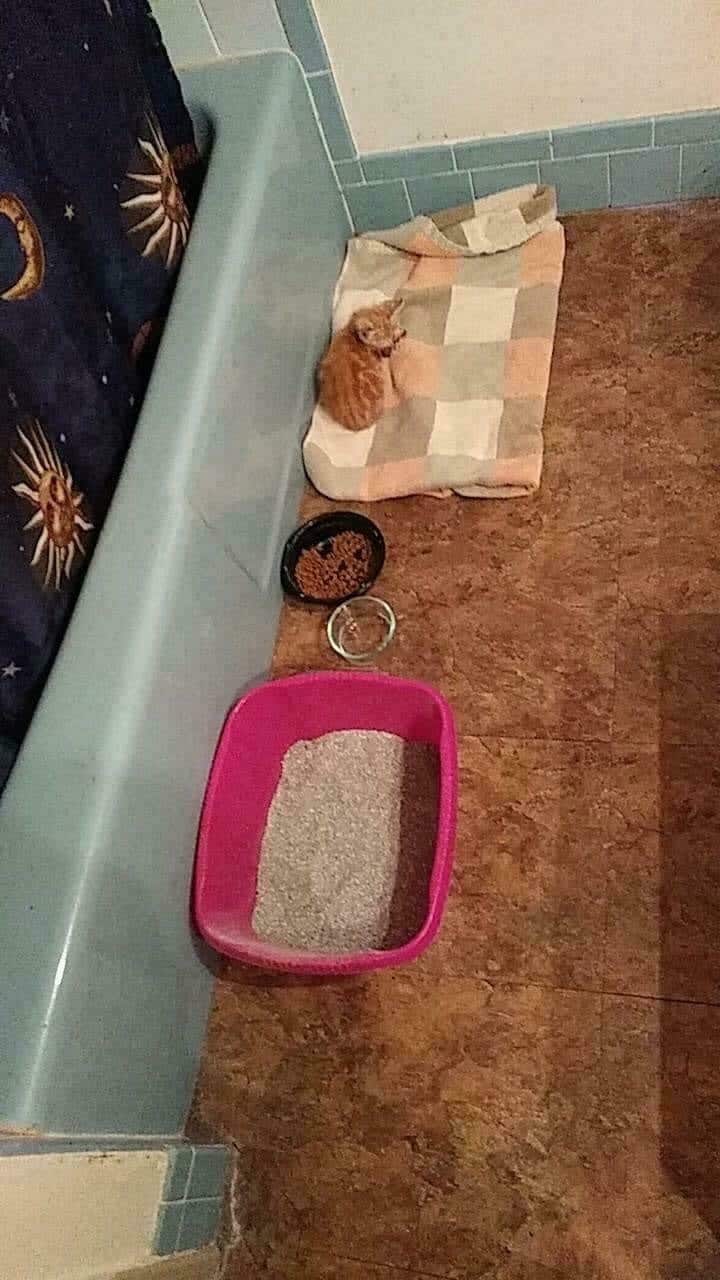 The diagnosis was heartbreaking.

He needed both of his eyes removed, but he wasn’t healthy enough for surgery. He was full of parasites, fleas, and underweight at only 1 lb, 4 oz. The doctor determined that his eye injuries happened from either trauma or a disease such as an eye infection that went too long untreated.

Richey had enucleation surgery on both eyes when he was healthy enough.

Instead of going to foster with Dani as originally planned, he went with Nancy, one of the vet techs from the animal hospital. This way he could be monitored by medical staff closely during his recovery. Thankfully he was now under watchful eyes as it was soon discovered that his battle was far from over.

They found that he had ringworm as well as a severe bacterial infection. The poor boy stayed brave and fought with every fur on his tiny body. For the next few months, Richey progressed slowly and finally overcame his medical issues. He learned how to “cat” now that he was blind and began growing and playing just like any other kitten. Even more heartwarming, he shared his foster home with a 100 lb calm bulldog and a couple of non-aggressive cats. The acceptance of other animals in his life was a great testament to how well he was adjusting.

By September 13th, Richey was ready for adoption.

The day before, Larissa had contacted Dani to let her know he was ready for a fur-ever home. Nancy had kept Dani up-to-date on Richey’s status throughout everything as there was something else that made her take an extra interest in the boy.

Dani already had vision-impaired cat in her home, Pippin.

She was considering adopting another vision challenged or blind kitty to be his friend. With everything that had happened with Richey, fate had presented her with the purrfect cat. She really wanted to go straight there and adopt him but decide to sleep on it. Nancy shared Richey’s new-found zest for life on the Suncoast Animal Leagues Facebook page around 3:00 p.m on the 13th.

He had come a long way from where he was found on the streets close to death.

He knows where his litter box is and can focus on your voice. I bought him a scratching post the other day and he loves empty water bottles. Richey is personality plus. He does not know he can not see! He can keep track of a toy and follow through a room with no problem. Happily, he plays with a passion and loves to snuggle.

Even with multiple foster kittens surrounding her the next day while working, Dani couldn’t get Richey out of her head. She rushed to the shelter after work to visit him and instantly fell in love. Around 9:30 p.m. that night, Dani shared this on her Facebook page.

I did a thing today. So a few months ago I got a text about an injured kitten, when I received the first pictures I was stunned at what I saw. I immediately contacted the rescue for help and he was off to the vet where he had to have both his eyes removed. I wanted to foster but he ended up going to a vet tech which was better because he got ringworm and a bacterial infection. Yesterday he was ready for adoption, and I’d be lying if I didn’t tell you that I thought about him every day since I was sent that first pic of him.

Ever since Pippin, I had been wanting another vision impaired kitty. I tried to talk myself out of it but with a little push from a friend, and went down and now he’s part of my big family Dani renamed him Banjo, more fitting for his personality.

She tells us that, “He is such an affectionate and confident kitty. I kept him in the bathroom a few days to get him acclimated to my house, but it wasn’t long before he wanted to explore. He gets around quite well, and he already recognizes the sound of my voice and is getting the layout of my house down.”

He’s learning to figure out what other cats are and how to play with them, although he’s still a little unsure. Dogs though don’t scare or phase him at all. He loves everyone he meets and wants them to pet him and pick him up!

Each day, the bond between Banjo and Pippin grows stronger.

They may not have any sight between the two of them, but their over-sized hearts boldly lead them on the path to happiness. Even better, we can joyfully follow their antics on Banjo’s own Instagram page @noeyebanjo! Be sure to get your daily dose of happiness with this adorable family!

Thank you to Dani for opening your home and heart to these special needs fur-babies, your continued foster and volunteer work and for being an inspurration! <3 You can also follow her amazing work on her Instagram page too @danithecatlady. It’s been about 5 months since Banjo joined Dani’s furbulous family and he couldn’t be happier. Seriously though, look at this content and happy cat! Not only has Banjo gained a wonderful family that fit him purrfectly, he’s got his own growing fan-base. His extended online family happily follow his adorable adventures @NoEyeBanjo on Facebook and Instagram.

Banjo and his adopted brother, Pippin, fill Dani’s home with love, laughter and inspiration. Here you can see Banjo enjoys posing for the camera in some dashing attire. Don’t worry, he loves it and the clothes almost act like a security blanket for the blind beauty. The two brothers quickly bonded and remain the best of buddies. Regularly snuggling together, they make it easy for Dani to capture tons of precious–or “busted” moments!!! Love that the completely blind cat has taken the king of the castle, elevated role. We all know how cat’s feel about boxes…but seeing the reaction to their FIRST encounter is absolutely heartwarming. If you’re not smiling right now, you should probably check your pulse!

Banjo and Pippin fearlessly explore their new terrain with confidence, not knowing they’re different from any other cats.

Banjo maps out the house–for example, when he comes to bed at night. First, he goes up the dog stairs, walks around my head and comes down to the left side of me to sleep. In the morning when he gets up, he retraces he steps. He’ll go up back up around my head and down the stairs the same way he came. I also love how when he encounters a new toy or cat tree. He paws at it and then walks in circles sticking his paw out to get a feel for his surroundings. He also always goes down backwards which is so smart!

Banjo isn’t just a loving, silly kitty that has claimed a dedicated human, he happily contributes to his mom’s work. Which means the ginger sweetheart is now a meowtivational cat rescuer too! Dani hasn’t slowed down in her life-saving cat rescues a bit since Banjo joined her clowder. He has turned out to be an amazing big brother to the foster cats and kittens Dani has brought home. Photo courtesy of @DaniTheCatLady & @NoEyeBanjo ~ “Sure I’ll be your pillow little foster Luna!” Dani’s newest fluffy fosters arrived just this week; the Riverdale kittens. Just like the others, Banjo is quick to lend a helping paw.

That is, AFTER his dominance has been established at the top of the cat-tree purramid. If Banjo (and Pippin), can’t convince you to open your heart and home to “special needs” cats, I’m not sure anything will.

Thank you to Dani and her boys, for continuing to prove ALL cats deserve love. Even “special needs cats” are PURRfectly capable of returning that love a million times over!!! Be sure to follow all their adventures. Just be careful you don’t get too sucked into watching their adorably addicting videos–or be content doing just that like I did! <3