A tiny pair of kittens was discovered tucked away in a boat after their mama was seen fleeing the area.

When the mom didn’t return, the owner of the boat took the 2 lonely kittens and brought them to a local shelter. The kittens were too young to be at the shelter though and needed special care to survive. A rescue in Tampa, Florida welcomed the furbabies into their foster program. Abandoned at around a week old, the brothers would need to be bottle fed around the clock. Luckily they had a team of experienced foster moms ready to help.

Kellie Bouley raised the bottle babies until they were about 7 weeks old. Then Jen Tate, who has fostered almost 650 cats and kittens (!!!) took over the duties. These two little brothers joined her household on April 11th.

The black kitten was named Smee and the little grey tabby, Sailor. As the weeks went by and the boys eventually began to eat solid food instead of formula, Jen noticed there was something a bit different with Sailor. He was getting sick after eating and not gaining weight properly for his age. At 10 weeks old, he was only 1.09 pounds! At this time, Jen was also fostering a cat named Bristol. This pretty girl had the same issues Sailor was now exhibiting. After visiting the vet, Bristol had been diagnosed with Megaesophagus. This is when the esophagus is enlarged and doesn’t allow the food to move into the stomach.

According to PetCareRX.com, “Because foods and liquids cannot make their way into the stomach, a cat may regurgitate and begin to lose weight. In addition, foods or liquids that are inhaled into the lungs can cause aspiration pneumonia, which can be fatal if not treated promptly.” Sure enough, Sailor was diagnosed with megaesophagus too, although less severe than Bristol. Jen now had confirmation and knew just what to do for little Sailor to survive. The big name may sound scary and there is no cure, but for Sailor, his condition just needed the right person to help him manage it.

The main thing he required was for his food dish to be elevated, ideally also tilted. This may sound easy, but there are not many options for cats with this diagnosis. He also takes pepcid and another medicine twice a day. 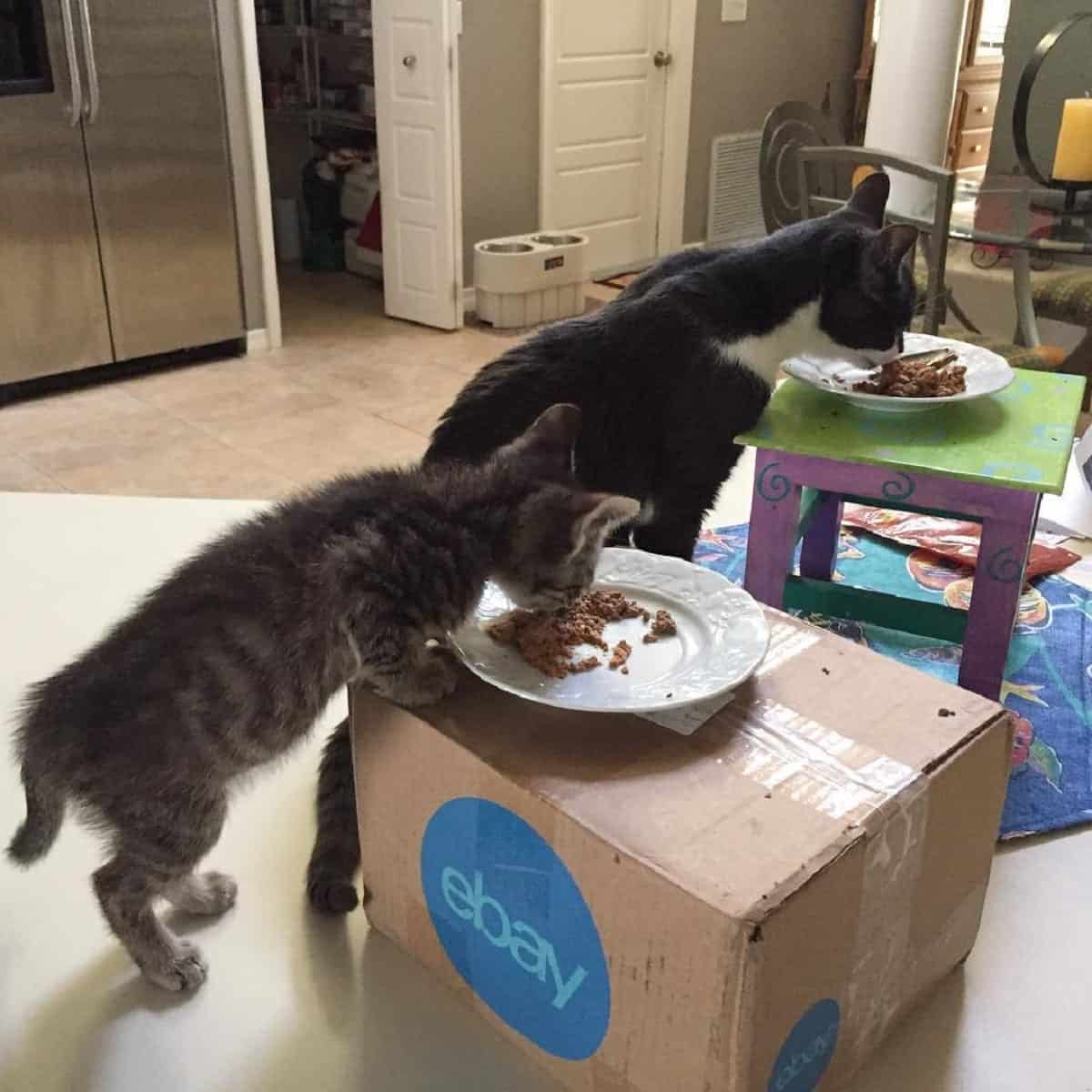 For dogs with megaesophagus, they will use what’s called a Bailey Chair. This is basically a high chair that the dog sits up in and can then use gravity to force the food down. But anyone who knows cats, knows that they are not going to stay confined in a chair. With the recommendation of Kitten Lady, Hannah Shaw, who has fostered kittens with the ailment, Jen was introduced to Preston Tobery. Preston worked with Hannah on designing and creating something just for these special kittens and cats that would help save their lives.

Before this genius invention was created, there was nothing specifically designed for felines. But now they have… The Mega Feeder 3000! Preston is working on raising funds so that he can officially turn his heroic hobby into a business. He plans to purchase a 3D printer so that manufacturing can be quicker and cheaper for needy cats.

As Preston points out in his fundraiser, “So many animals with disabilities or special needs are euthanized before they are given a chance at life. I’d like to hopefully make a small impact on changing this.”

He has almost reached his $3000.00 goal that will help him save countless lives!

With this discovery, Jen knew that it meant the box that Sailor was using to hold up his food bowl could be put to better use. Jen’s husband had built Bristol the purrfect feeding stand that she’d been using successfully, but didn’t have the “tilt” of the Mega Feeder. Then they received an amazing donation where she was able to purchase feeders for both of the deserving cats!!

And the packages arrived this week! Bristol just found her furever home on August 12th, so as a “standing ovation” for welcoming the girl into her family, Bristol’s new mom was gifted with her new feeder.

Sailor is still with foster mom Jen, and he was absolutely delighted when the packages arrived…especially about the box! But now Sailor can eat from his Mega Feeder 3000 with no issues and he just loves that he can stand up at his very own bowl.

He is sure to give his foster mom lots of snuggles and purrs after a good feeding. Sailor loves to perch on her shoulder like a “parrot kitty”. He is good with other cats, dogs and even kids. If you are in the Tampa area and interested in adopting Sailor, please submit an application here.

He’ll be sure to thank you with his beautiful green eyes and purrs which we’re told are “as loud as a motorboat”. If anyone is interested in finding out more about the Mega Feeder 3000 and how to go about purchasing one, contact Preston here: adaptivetechandconsulting@gmail.com.