A young fosterer in Oregon forms a tight bond with a rare albino mama cat and her litter of kittens. There may be only about 2% of cats that are albino, with white fur and pink or very pale blue eyes and pink skin. Jazmine has pink eyes and fluffy white fur and became a bit of a TikTok star.

In a previous story, we shared the “sweetest foster fail” when “junior fosterer” Jaxon at Oregon’s Meow Village had an unexpected reunion with two cats he helped raise from kittens. A turn of events brought them back together and brought many people to tears. It’s also a great example of how kids can help foster kittens and cats.

Afterward, fosterer Jaxon and his family continued to foster kittens after adopting George and Jerry, who almost outgrew Jaxon (see the previous story).

Although there were two so-called “foster fails,” the family didn’t stop fostering cats. Shortly after adopting the cats, they took in a beautiful albino mama cat named Jazmine. Rescuers found Jazmine outside and very pregnant, ready to pop! The video below shows you her unusual pink eyes and gorgeous fluffy white fur.

It’s hard to believe someone abandoned this pretty mama! And as an albino, she may be sensitive to too much sunlight.

Fortunately, the foster family took in Jazmine before her babies came, and she could raise them comfortably without starving on the street. The likely outcome would have been a disaster.

“We don’t know if her babies will also have albinism,” the rescuers said. “But we do know they will be very cute just like her.”

On Facebook, the rescuers shared the special bond that Jaxon and Jazmine formed. As it turns out, he picked her name, and they enjoyed snuggling together every day. It looks like George and Jerry are playing on the other side of the door. Thus, they kept the mama in her own space as she prepared to have her babies.

“He comforted her while she was pregant,” they said. 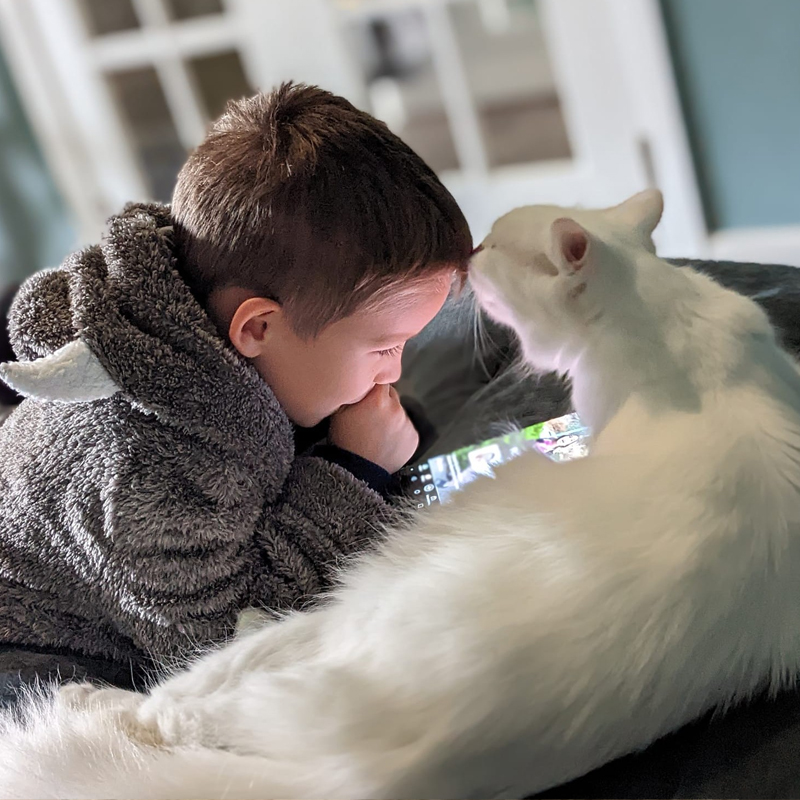 Below, you can see how excited he was to see the arrival of the kittens, and who wouldn’t be? He’s grinning ear to ear, and it’s amazing how trusting Jazmine is with him being so close to the kittens. She knew he would be gentle and loving with her tiny ones. 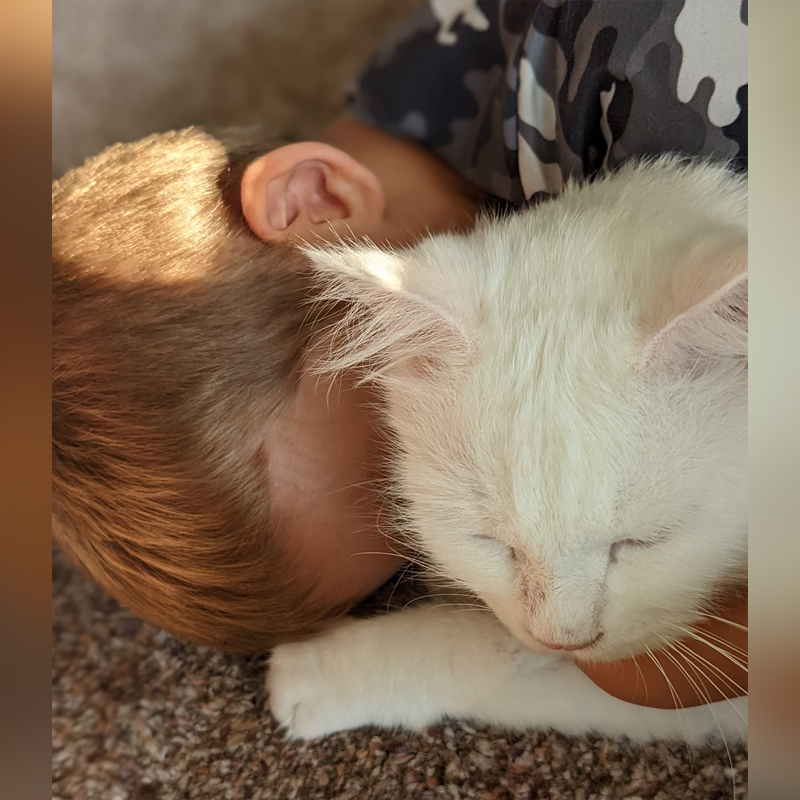 “Junior foster, Jaxson, with Jaq and momma, Jazmine 🥰We’re not sure if it can get any cuter!”

As you can see, the albino mama had all black and white little tuxies in September! Since albinism is a recessive trait, it’s expected the kittens would not also be albinos but probably like their father, wherever he may be. For the kittens to be albinos, both parents must carry the gene for albinism.

As always, we would strongly discourage anyone from seeking a cat from a breeder. 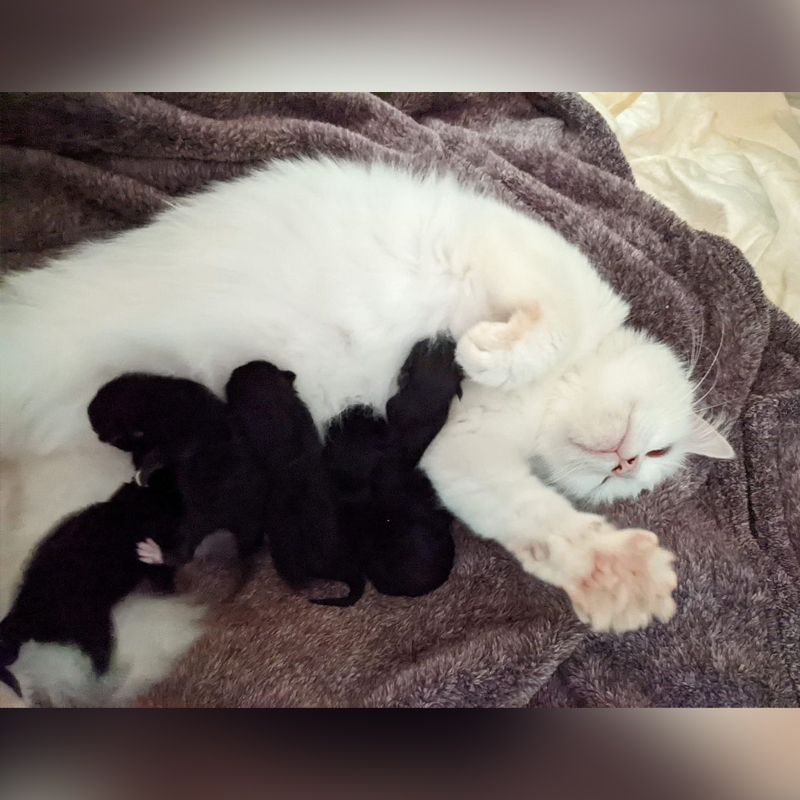 But some of the kittens had little white paws and markings like tuxedo cats. 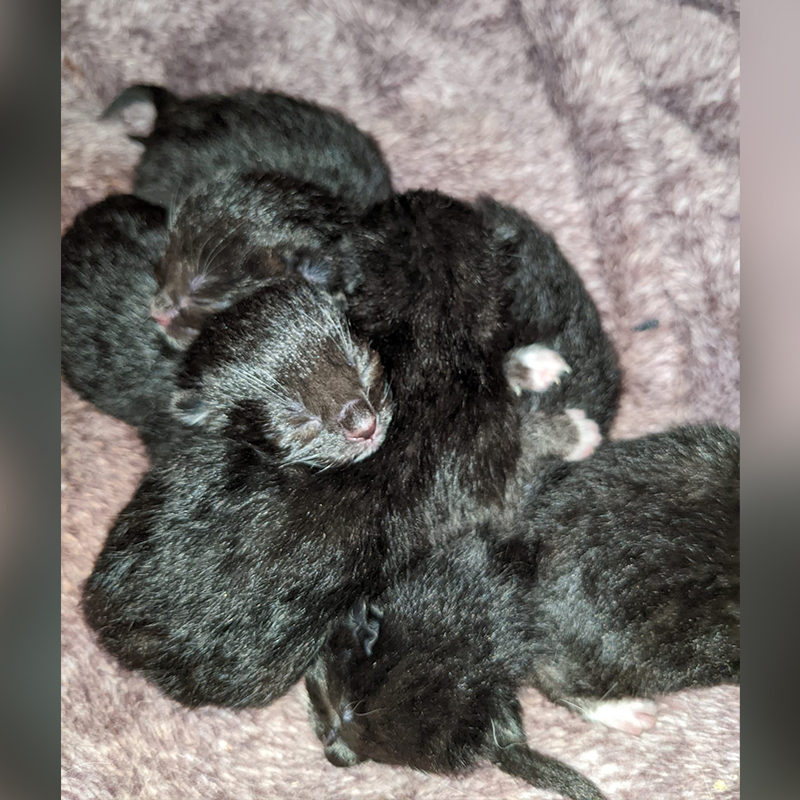 Jazmine’s Babies Ready For the World

Now, some of the grown kittens are ready to find their forever homes. Jaxon and his family did a great job, and now the kittens will have happy lives as beloved companions for families in Oregon.

One of the kittens named Bert has been adopted, and the rescuers described him like this:

“Named after one of the cheerful mice in the Cinderella story, Bert personifies the lighthearted personality of his namesake. He’s a spunky monkey with an outgoing disposition and the biggest, sweetest heart. Everyone Bert meets is welcomed with open paws, including kids and cat friendly dogs.” 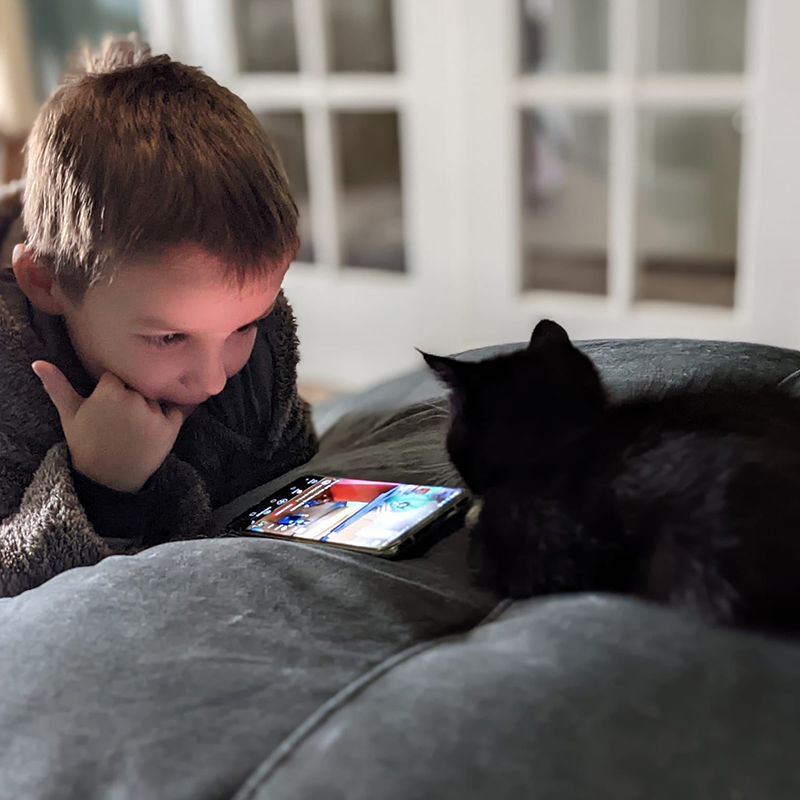 As of this writing, some of Bert’s siblings, now about 3 months old, are still looking for forever homes in the Donald, Oregon, area.

“Toby may be the half-pint in his fur family size wise, but he holds his own and then some in the personality department. He’s so fond of attention and pets from his people, that Toby will flop over on your lap to ensure you feel those loving vibes. After spending the night in his kitten room, Toby is always eager to rush out and get the ball rolling on whatever excitement the day brings. He’s a perky poser and a natural born supermeowdel, so you might want to consider having the camera on standby at all times,” they shared on Facebook. 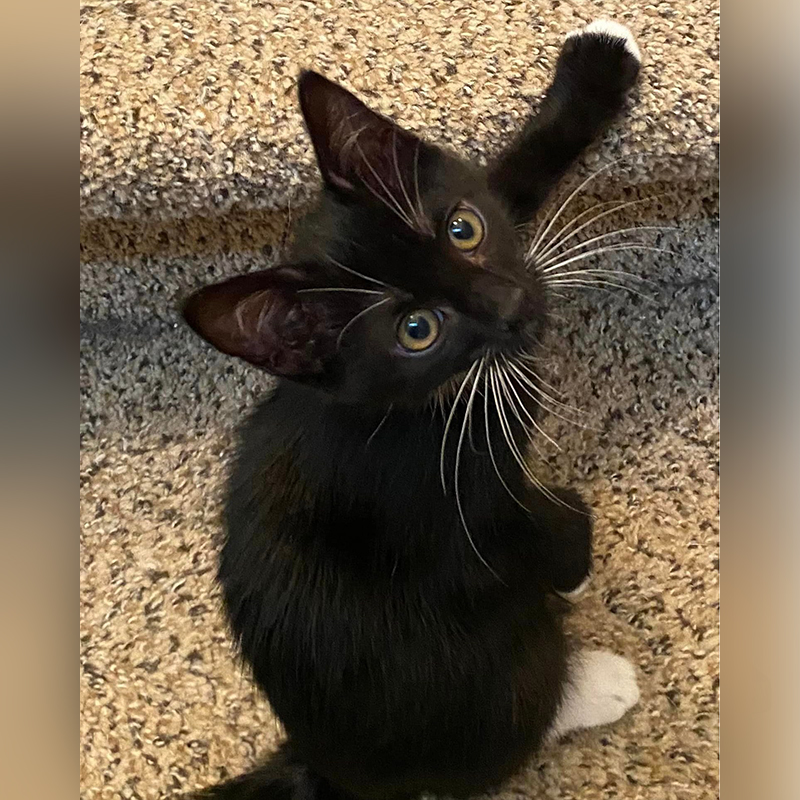 And below is Buddy:

“Buddy has a carefree disposition and plays like he hasn’t got a care in the world. After all of his kitten energy is exhausted, don’t be surprised to see him hanging around wondering when cuddle time begins. His dashing soul patch accentuates an already exceptionally handsome face and he imagines that a lot of other kitties are secretly envious. His purr motor is rather loud, so you’ll always know when Buddy is coming into the room.” 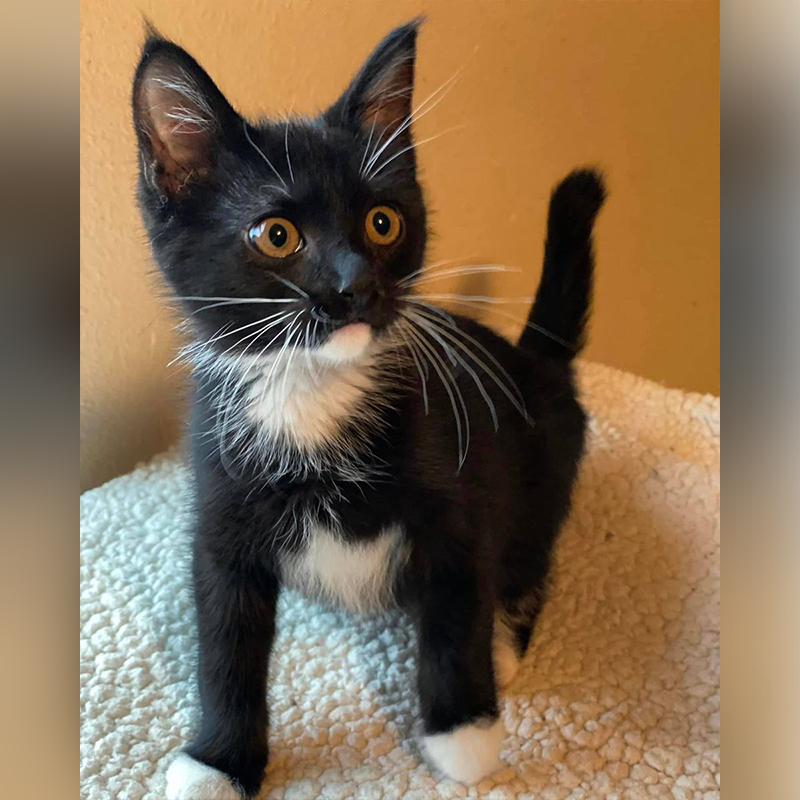 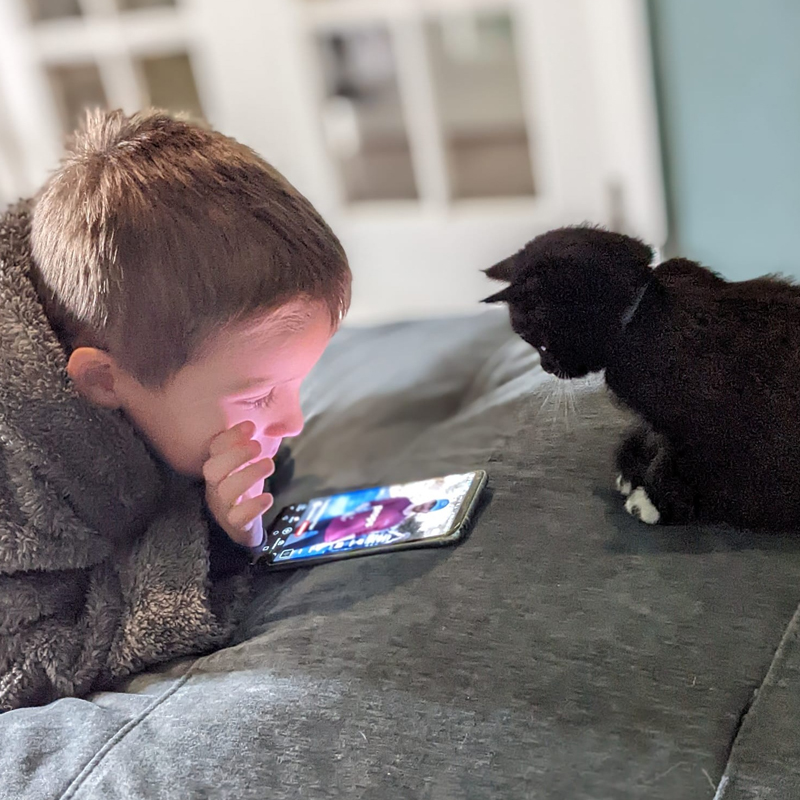 Jaxon and Jaq the kitten