After A Year Of Severe Allergies, Cat Finally Finds Relief By Moving To Arizona

Anywhere that you live, you will be affected by the weather. And for each person it’s different. Some love the humidity of the South warming their bones; others wouldn’t spend one minute in the sweltering heat. Northerners don heavy winter clothing to bundle up in the snow and play. Those afraid of heights avoid living in a towering city skyscraper or a secluded mountainside cabin. For anyone with medical issues related to the weather, we can simply go to the nearest pharmacy and pick up medication. If one doesn’t work, we have an array to choose from so that we can comfortably settle back into life. But for one cat suffering from severe allergies in North Carolina, it took more than a year to find relief from her environment!

And more than 2,000 miles to distance herself from those severe allergies.

But you better believe that every single mile has been worth the trip for sweet feline, Empire. Her journey to get there though, was one full of ups and downs.

Empire and her siblings were brought into a Henderson County animal shelter in NC in July of 2018. No one knew what they had been through, but each of them had sores and wounds on their young bodies. It looked as if they had been burned by fire or chemicals. However they didn’t know exactly what was causing the skin irritations. Knowing they wouldn’t survive in the shelter long regardless, Brother Wolf Animal Rescue pulled the litter from death’s door. They were at risk for euthanasia due to their severe allergies. The cats were all suffering from agonizing skin irritations and open flesh wounds. Brother Wolf’s medical team provided necessary medical care to alleviate the cats’ allergies. Luckily, Empire’s siblings all responded well to the treatment and quickly found adoptive homes.

But poor Empire didn’t find relief like her siblings. She did find a generous foster who welcomed Empire into her home–for almost a year!

[It was] almost a year while Brother Wolf’s medical team worked hard to find a solution for Empire’s ailments. They placed Empire on every possible allergy medication but her symptoms persisted. Even expanding to include hair loss and secondary eye infections. After weeks of implementing multiple therapies with little improvement, the team consulted with a local veterinary dermatologist. It was this team who discovered that her severe allergies were regional.

It wasn’t a flea or food allergies or carpet in the foster home. Poor Empire had been reacting to a number of environmental allergens, common in Western North Carolina!

“We started her on immunotherapy drugs, which essentially suppressed her immune system to try to reboot it. But we knew that, ultimately, what Empire actually needed was a different environment,” recalls Laura Booth, Medical Manager for Brother Wolf Animal Rescue. Knowing they needed to find the best climate to avoid the irritating allergens, they began their search.

Brother Wolf’s Interim Director of Operations reached out to the President and CEO of Arizona Humane Society. [They] gathered the animal rescue’s medical team to review Empire’s case. Arizona Humane Society believed they could provide Empire with a better life in the desert climate and offered to take Empire into their care. 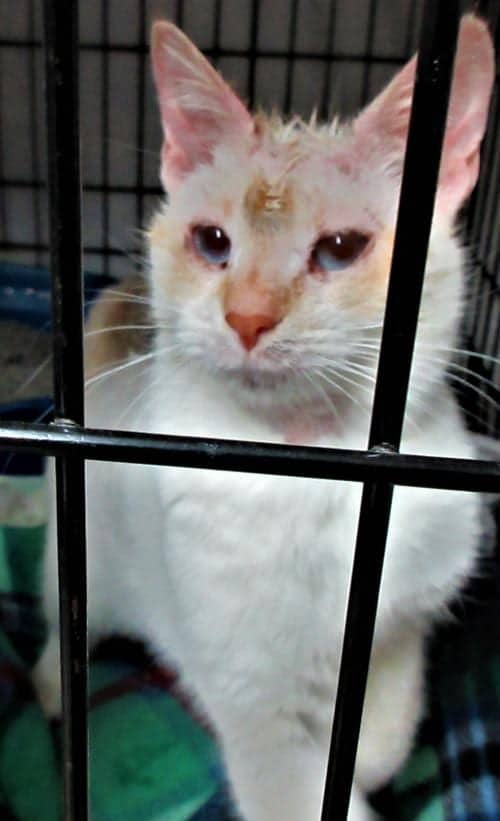 Now came the hurdle of finding a way to transport Empire the two thousand miles from North Carolina to Arizona. But with an amazing support group on their social media pages, they found a hero for Empire. Her foster families all agree on one thing.

“She is an amazing kitty un-phased by all her past troubles and very happy to finally be out of her cone and living the good life,” one of her foster mom’s Denise Belisle Stone commented on the BWAR Facebook page. “Empire’s journey is a perfect example of how we can best serve animals in need when we all work together, said Leah Craig Fieser, Executive Director of Brother Wolf. “Organizations and individuals from near and far came together to save Empire and we’re so grateful for this amazing outcome for her.”

Be sure to follow them online for the rest of Empires’ journey. It’s sure to be a life of comfort for her in the breathtaking Arizona landscape. Brother Wolf Animal Rescue, located in Asheville, NC, was founded in 2007 to provide the resources and programs to build No-Kill communities. Through thriving adoption and pet retention programs, extensive volunteer and foster networks, a trap-neuter-vaccinate-return program for community cats, and a low-cost mobile spay & neuter clinic, Brother Wolf positively impacts the lives of thousands of animals each year. Learn more about Brother Wolf and their life-saving programs at www.bwar.org. To learn more about the chapters, visit their individual pages on Facebook. Related Story: Special Needs Cat Wins Hearts Of His Adopters…While On Vacation Halfway Around The World!