Declawing Your Cat Is Now Illegal In The State Of NY

For many years, the thought of declawing your cat was viewed as a personal preference. For myself, I’ve never once thought to declaw a cat. But clearly, there are people out there that do not feel the same way. Fast-forward to today and the internet is an endless resource of cat knowledge–ColeAndMarmalade.com included! By now we know the negative consequences involved when it comes to declawing your cat.

And we are also well aware of what the procedure itself actually is. 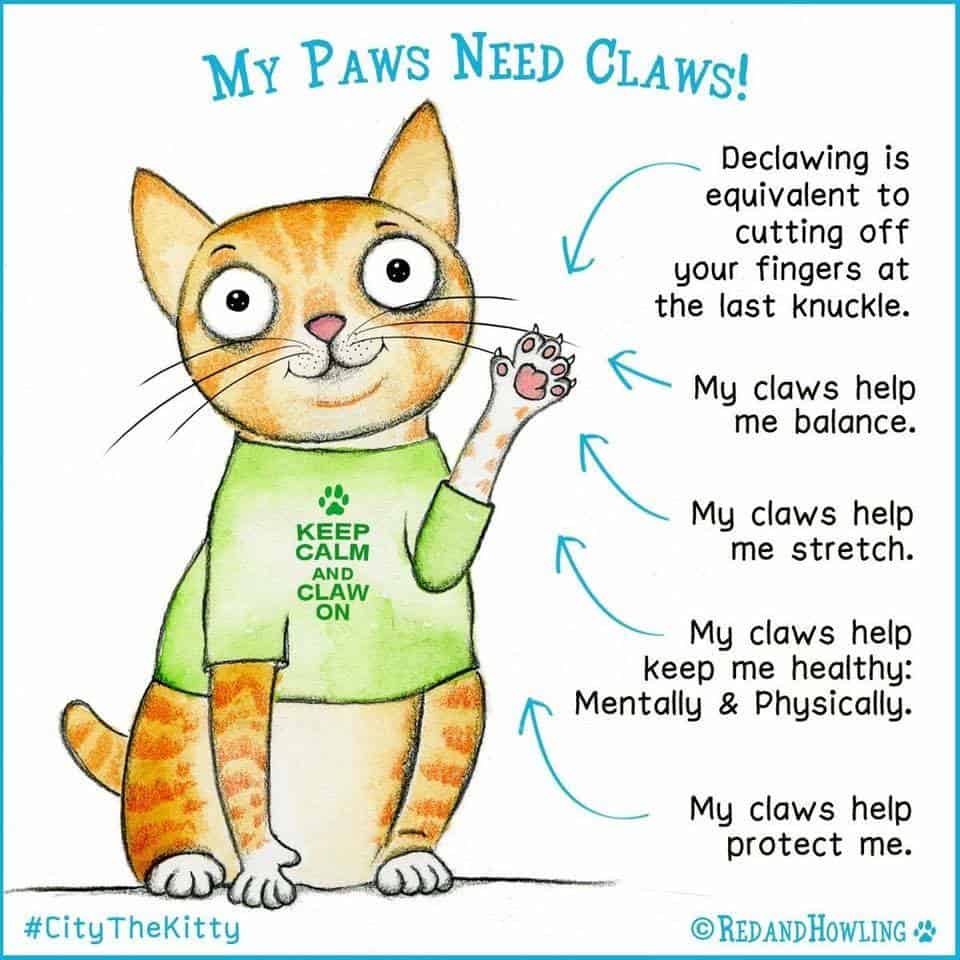 The state of New York is a state that truly cares about the well-being of our feline friends. Because as of this Monday, July 22, 2019, declawing your cat is now illegal! Governor Andrew Cuomo signed the bill into law (S.5532B/A.1303). First mention of the bill made waves last month, and New York cat owners anxiously awaited the final say from the Governor. They had to wait for once it went through the proper legal process–supurr frustrating!

According to supporters of the ban to make it illegal to declaw your cat, it’s estimated that roughly 25% of domesticated cats in the U.S. have had this procedure done to them.

Governor Cuomo was asked what inspired him to make this legislation of declawing your cat illegal. He was quoted as saying: “By banning this archaic practice, we will ensure that animals are no longer subjected to these inhumane and unnecessary procedures.“ Reason for the bill’s passing stems from the common knowledge that removing a cat’s claws requires the partial amputation of the last bone in each of the toes on a cat’s front feet. It’s also primarily done for a human’s gain, and not a feline’s (with extremely rare exception). As a result, this can potentially lead to chronic pain. This is what the governor’s office deemed as cruel and unnecessary. Seems pretty obvious to us!

Many members of the state government were vocal about the cause and importance of the law being made official.

Assembly Member Linda B. Rosenthal said, “Today, New York becomes the first state in the nation to ban cat declawing. Declawing is cruelty, plain and simple. With so many low-cost and pain-free alternatives available, there is no reason to allow this barbaric practice to continue. Not here in New York or anywhere. It’s a wonderful day for the cats of the state and the people who love them. Now that my bill has become law, New York has been catapulted onto the leaderboard of humane states.

And we expect other states to quickly follow in out footsteps.” Senate deputy leader Michael Gianaris also weighed in on the bill. He described his feelings of discontent related to cat declawing.

Cats’ claws play an important role in various aspects of their lives.When a person has its animal declawed, usually in an attempt to protect furniture, they do fundamental damage to that animal both physically and in behavioral ways.

The bill was passed by the state assembly last month, and according to the governor’s office, will take effect immediately

Clearly not all cat owners–or veterinarians–are happy with news of this new bill. But legislation made sure that there valid exceptions to the rule. Hopefully these are very rare. The bill makes exceptions for “therapeutic purposes,” or when the declawing would benefit the cat’s health. This past May, the New York State Veterinary Medical Society (NYSVMS) weighed in on declawing your cat. They were supporting the procedure for cat owners with diabetes and/or impaired immune systems. In their opinion, declawing your cat could be an alternative to euthanasia for those persons mentioned above.

NYSVMS believes a veterinarian should be permitted to make medical decisions. After direct consultation with a client and a thorough examination of the patient and its home circumstances. It turns out that New York is not the only state with plans to ban declawing. Massachusetts (Bill S.169) has already proposed a state ban on feline declawing earlier this year.

There are other areas of the world who have made it illegal to declaw your cat. Declawing is already banned in the UK, Israel, Switzerland and several Canadian provinces. It’s also banned in some US cities such as Los Angeles, San Francisco and Denver as well.

We want to know your thoughts, do you think that other states should follow suit? Share with us in the comments!

Related Story: No Need to Consider It; Here are 5 Alternatives to Declawing Your Cat