According to the Daily Mail, the author’s famous granddaughter Mariel was “terrified” of losing the home and cats. As the storm approached, the now-museum staff transported the resident cats to a bunker to hunker down. 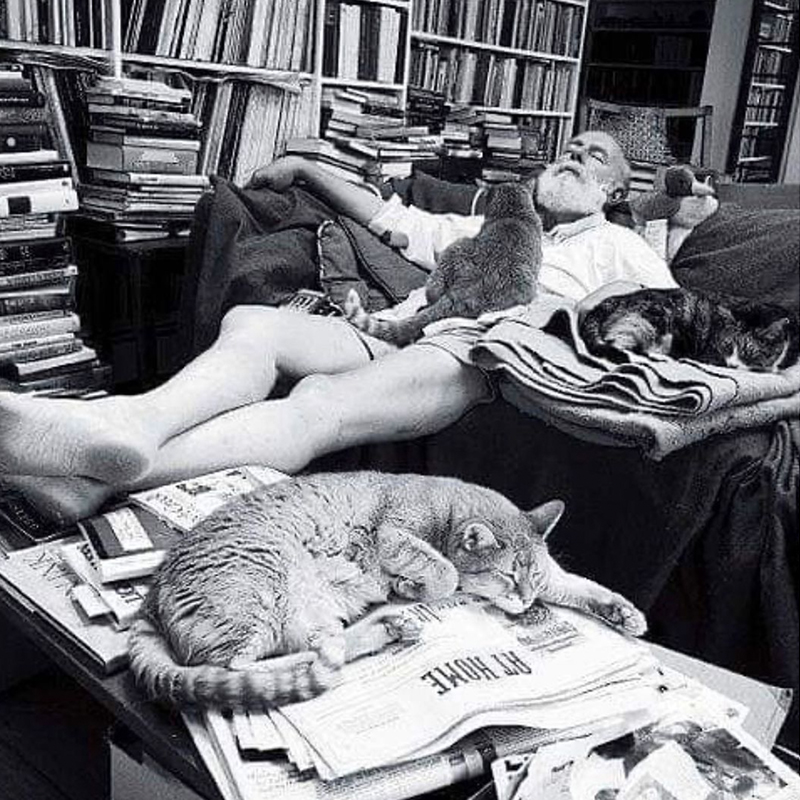 Previously in 2017, Mariel Hemingway had faced similar fears during Hurricane Irma. At that time, she says the news was once again focused on the 6-toed Hemingway cats.

“When the Florida one was hit by a hurricane previously, the only news that came out of it was that his six-toed cat survived,” she said.

Fortunately, the beloved cats and Key West home survived the storm, and Hemingway’s other home in Havana, Cuba, also managed to survive. In a video, we see the Hemingway cats just before Hurricane Ian arrived. Staff was preparing to move the cats to the “bunker” area. You can hear the wind picking up and the rain coming down as they take a count of the cats roaming the grounds.

Video and images via Instagram/hemingwayhomecats:

Then, we can see the cats again as the museum reopened. While the grounds are saturated, the cats are safe and back to their usual routines. Fortunately, there was only minor wind damage, and all 59 Hemingway cats survived. Although built in 1842, the home is solid with 18-inch-thick limestone walls. It also sits 16 feet above sea level at the southernmost point of the USA.

After the storm, the Hemingway Home’s cat-dedicated Instagram shared a wonderful update: The cats supervised the minor cleanup efforts.

“Happy to report that all 59 of our feline residents, along with our staff and the historic home, have safely weathered Hurricane Ian! Our crew spent most of the day cleaning debris while the cats supervised 😹.” The Hemingway Cats Have Famous Names

The Hemingway cats have names after famous people, but Snow White was the first polydactyl cat. A ship captain gifted the author the cat, and all of the descendants have the polydactyl gene.

The cats are so popular that they have their own apps, which you can find on the museum website.

Recently, staff shared a video of Joe DiMaggio, the charismatic cat living it up at the Hemingway Home.

And, below is Hedy Lamarr.

“Did you know that all of our cats are named after famous people of Ernest Hemingway’s time? Hedy Lamarr was a an actress, producer, and inventor. She co-invented a radio guidance system to help allied torpedos from being set off course.” Recently, we learned about four kittens born in May 2022, each with famous names:

Mariel Hemingway lives with four cats and has lived with as many dogs until her 22-year-old Yorkie Bindu and rescued Border Collie Tree, 13, recently passed away. She truly loves animals, and we give her our condolences for her sweet puppies.