A pretty tortie kitty named Pym, the Shower Cat has a habit that is self-explanatory and surprising. If you’re having a difficult day, watching this kitty is sure to make you laugh as it has for millions on TikTok. This kitty’s hilarious antics are a good reminder to go with the flow, enjoy life, and expect the unexpected. At first, Katie Behr thought Pym was “just a little curious about running water.” But then, the cat started jumping into the shower –and loving it. It was a “huge surprise” for Behr, she told The Dodo (see video below). Pym in the shower, screenshot via YouTube/The Dodo

After the first shower experience, Pym was hooked and would run and wait for Behr inside the shower curtain, meowing. From then on, it became a part of the daily routine. With this kitty from New York, the general rules about cats and water went down the drain.

“Everything you’ve heard about cats not liking water does not apply to my Pym,” Behr said. “Pym wouldn’t even test the water, she just goes right in.” 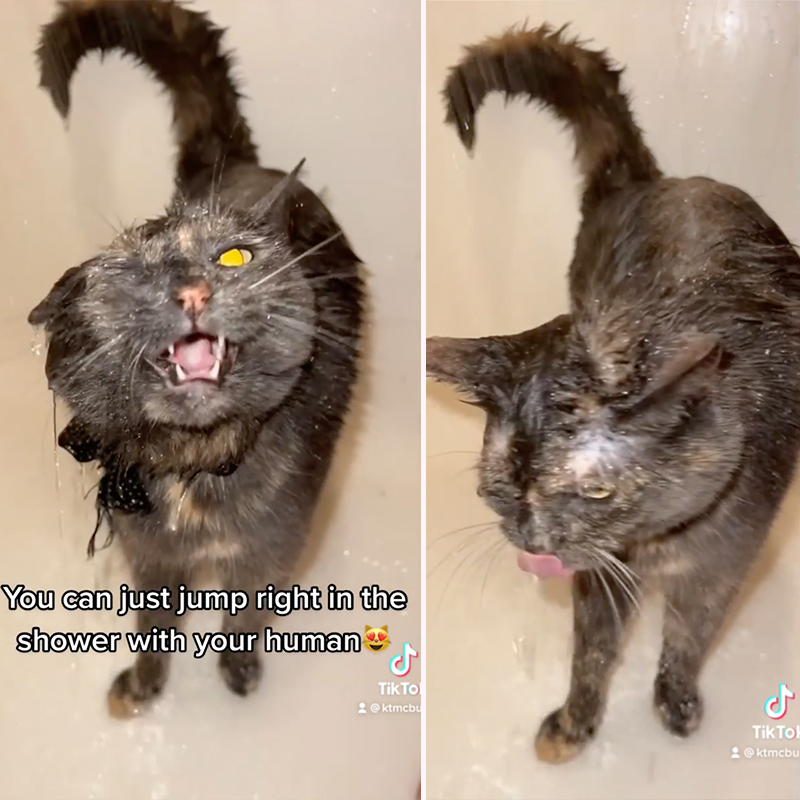 After her mama posted videos of Pym on TikTok in April, Pym suddenly had millions of fans and was interviewed for the news. Pym the Shower Cat is ‘All In’

At first, Pym is a little timid in the shower, but then, “She’s all in,” getting water-logged and lapping the water with her pink tongue. As she stands under the tap (she prefers “nice and toasty” water), she will sing, meowing (or squeaking?) in exaltation. It’s so funny and adorable.

According to her mama, Pym was “definitely born this way,” voluntarily taking to the water whenever she gets a chance. But when offered the chance to get in a kiddy pool outside, Pym balked. So, it seems to be just a case of enjoying the bathroom shower. As Marmalade can attest, cats love bathrooms, but Pym certainly has a unique affinity for the water. After getting sloppy wet, Pym wears a little robe, and people can’t get enough of seeing it.

She prefers the robe to being towel dried, which she detests. She’s more of a spa day kind of girl.

After lots of requests from her TikTok fans, she started wearing a little shower cap. But, it’s definitely not her favorite (she hates it). She also enjoys showering with colorful rubber duckies sometimes. Some have asked if taking so many showers is good for Pym’s health. According to Behr, “Her skin/fuzz couldn’t be healthier 😍.” Since it’s just water, there’s no harm done, no shampoo that could strip essential oils. Generally, cats don’t need baths, but some, like hairless or long-haired breeds, benefit more from baths than most short-haired cats. Of course, there are exceptions, such as senior kitties that may have trouble grooming, and it’s a good topic to discuss with your veterinarian.

In one video, it seems Pym has figured out how to “work smarter” in her daily grooming routine.

Cats Singing in the Shower

Pym’s favorite song is “Singing in the Rain,” but she often showers to tunes by divas like Celine Dion or Christina Aguilera. It certainly adds drama and might make you crack up.

“Should have named her Celine.”

Life with Pym the Shower Cat

Seven years ago, Behr walked into an animal rescue and met Pym, refusing to leave without her. From then on, they were BFFs but little did she know she was taking home a kitten who would one day become known as the beloved Pym the Shower Cat.

Behr also shares her life with Scout, the husky, and an orange cat, Fat Boy, who love the water too! In the latter case, the cat will sit in the sink, but “he’s no Pym,” when it comes to water, she said on TikTok.

Cute video by The Dodo: