‘Most Responsible Kitten in the World’ –Binx Looks After Abandoned Litter

Kansas City, Missouri’s KC Pet Project, an animal rescue, shared a photo of Binx, the 6-week-old kitten, who they declared “the most responsible kitten in the world.” The rescue cares for over 10,000 animals a year, and they are seeing an uptick in desperate kittens as Spring Kitten Season arrives nationwide.

When Binx arrived, he was dutifully watching over three newborn 2-week-old black kittens “as best he could,” said KC Pet Project spokesperson Tori Fugate. It’s unknown if Binx is related to the kittens or what became of the mother.

Unfortunately, the mother cat abandoned these kittens, but Binx decided to stay with them. Although they would have soon perished, a kind person who found them brought them all together to the shelter.

“Meet the most responsible kitten in the world,” shared the KC Pet Project on Facebook. “He’s a 6 week old kitten that was found with three newborn kittens. The person who found them told us that he’s been taking care of babies, and we think this is about the cutest thing ever. They’ll all be heading into foster homes until they’re old enough to be adopted, but we had to share the cuteness with you.” 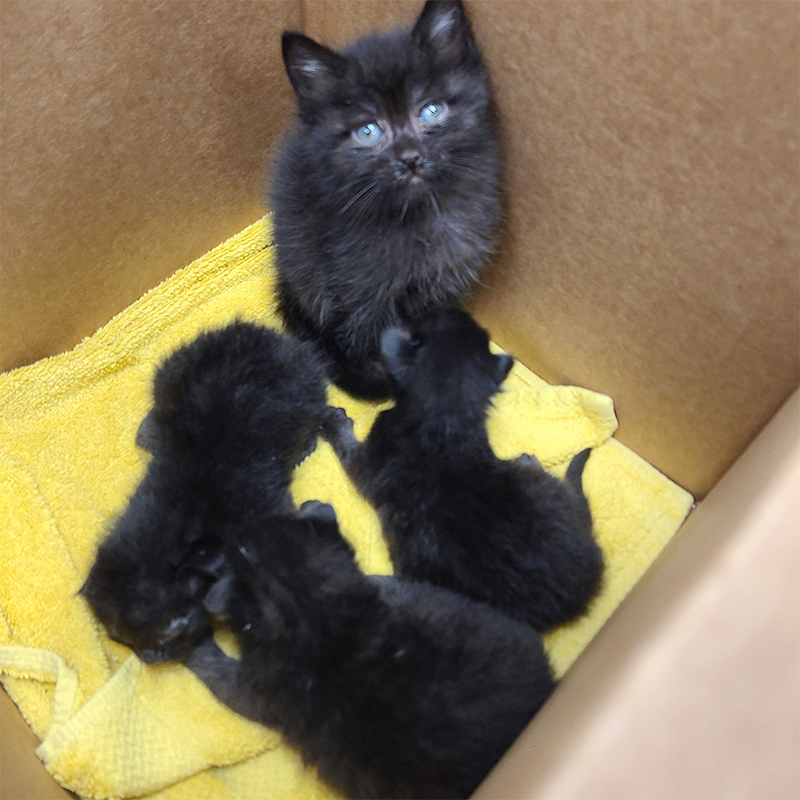 🐈‍⬛ How Binx, the Most Responsible Kitten, was Discovered 🐈‍⬛

“The person who spotted the four felines outside first waited to see if a mother cat showed up. When no mother materialized, the individual “brought them to the shelter together,” Fugate said by email. Following the rescue, the three younger kittens, all males, received their names: Ollie, Frankie, and Ziggy. Not wanting to break them up, Fugate said they remained together with Binx in foster care, and are “doing great.” With everything they need, Binx doesn’t have to babysit them anymore. Binx is Staying with the Kittens in Foster Care

At such a young age, the newborns require round-the-clock bottle-feeding.

“They all went to a foster home together,” she said, “because how could we split them up?” Fugate said.

Although these kittens are the cutest, the shelter, like others nationwide, has lots of lovable older cats that need homes, too. For example, below is “Bootsy,” a staff favorite.

“Bootsy is a staff favorite at our campus. She’s sweet and talkative, coming up to the front of the kennel to say hi when you walk into the cat room.” KC Pet Project posted to Instagram.