Mäuschen and Muschi: The 10-Year Bond Between a House Cat and Bear

Mäuschen and Muschi had an unlikely friendship that captured world attention.

A ten-year friendship between a stray black house cat named Muschi and a 43-year-old shaggy Asian bear, Mäuschen, enchanted the world. The unlikely duo who lived in the Berlin Zoo became famous, appearing on a TV show, “Panda, Gorilla & Co.”

Over a decade, the giant bear and the little black cat were inseparable, sharing food and their home. However, nobody knew where Muschi came from. She was a stray and just showed up in Mäuschen’s enclosure one day.

“She appeared from nowhere in 2000, and we decided to leave them together because they got on so well,’ said Heiner Kloes, who worked at the Zoo.

“They sunbathed together and shared meals of raw meat, dead mice, fruit, and bread,” she continued. 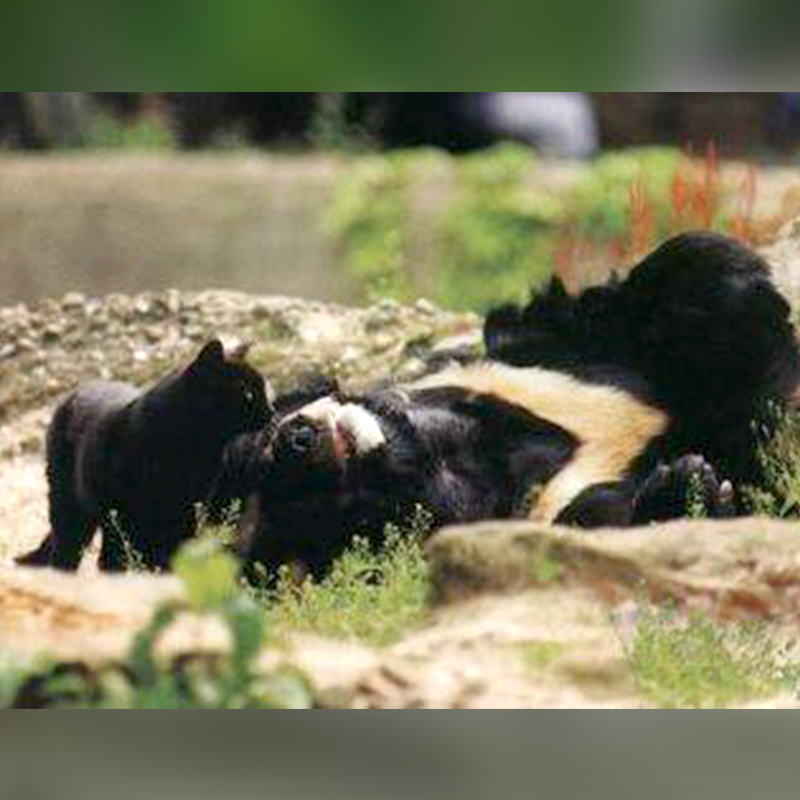 Thus, it was as if the two were old souls that recognized one another, perhaps from another lifetime. Extraordinary Bond Between Mäuschen and Muschi

At the Zoo, the cat and the bear became a big sensation. Daily, regular visitors came to see what they were up to. According to German news, Mäuschen, ironically the word for “little mouse,” quickly adopted and defended Muschi, translating to “pussy.”

“Mäuschen ‘adopted’ the little visitor immediately and defended her against attacks from other bears.” The Zoo Decides that Love Wins

Once, zookeepers separated the odd couple as they were working on upgrading Mäuschen’s enclosure. During this time, the now-elderly bear went to a temporary holding area separate from the cat.

However, the loyal Muschi became distraught and made it clear to the zookeepers that she wanted to be with her friend.

“But [Muschi] screamed so long and intensely for several nights that the zoo board decided: love wins.” 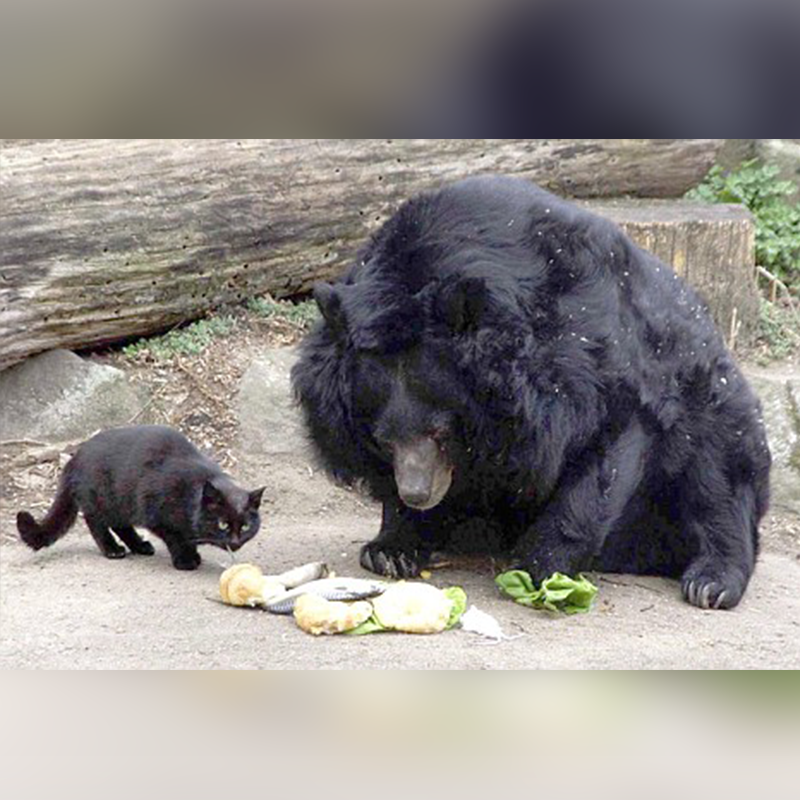 Soon after, they let Muschi go into the bear’s temporary cage for a visit.

“They greeted each other and had a cuddle, and now they’re happy,’ said Heiner Kloes, who worked at the Zoo.

Amazingly, the Asian bear lived with Muschi until 43-years-old. Thereafter, the cat remained cared for by the zookeepers.

You can see Mäuschen and Muschi interacting and playing together in the documentary  below:

Another Black House Cat and Bear Become the Big Attraction

Over a decade, the companions became famous at the Zoo. Over the years, the cross-species friendship made a black house cat a star attraction.

Similarly, a female black cat named Little Bear appeared at the Folsom Zoo Sanctuary in California. There, the cat made itself at home with two bears, Sequoia and Tahoe.

“The cat pretty much ignored female Tahoe, but apparently the female cat, now called Little Bear by a Zookeeper, is working to becoming male bear Sequoia’s new best friend. Often when Sequoia takes a hike through the “bear forest,” his cat friend walks with him. She rubs against walls, and visitors can hear her raspy purr from quite a distance,” wrote the Zoo’s website. Like Mäuschen, Sequoia was an aging bear weighing over 500 pounds.

Similar to Muschi from the Berlin Zoo, the feral black cat from California became a star attraction. The older cat enjoyed hanging out with the bear, staying cool in the shade. As they enjoyed their time together, shocked onlookers couldn’t believe their eyes. Somehow, these two very different animals loved each other as if they had always known one another.

See Little Bear and her huge bear friend Sequoia below from Humankind: