Fun Facts About The Siamese Cat Breed…”If You Please!”

For any of us who watched Disney’s Lady And The Tramp, there is one song lyric that we remember with ease.

In case you forgot, we’ve got the little reminder clip for you…be purrpared for it to get stuck in your head all day long!

Siamese cats are one of the oldest cat breeds in existence. These beautiful ballerinas of the cat world have captured the hearts of millions of cat lovers worldwide. We know that they are instantly recognized for their masked faces and striking baby blue eyes. But what else do you know about these “chatty cathy” cats? Such Purrty Colors You Have

Most of us know the Siamese for having a light-colored cream body with a sooty masked face. The Siamese is actually recognized by the Cat Fanciers’ Association for 5 distinct markings labeled as “points.” The Siamese color points include: seal, lilac, chocolate, flame, and blue.

A portrait of the Siamese, Cat Fanciers’ Association

Please note: There are a few sites that report more colors/points of the Siamese cat breed, the five listed above are just the most common ones seen in today’s world.

Have you ever met a Siamese kitty that was cross-eyed? While it’s not natural for a Siamese to be cross-eyed, it’s not entirely unnatural either. So how does this happen, you might wonder? The crossed eyes of the Siamese cat developed naturally to compensate for a genetic flaw in their eye structure. Interestingly, this same genetic trait causes the coloration of Siamese. Although the cat’s eyes are not permanently crossed, traditional Siamese cats must cross them to see straight. Since domestication of this lovely breed, Siamese cat breeders have worked diligently to breed away from the cross-eyed appearance. They also focused on the kinked tail that many Siamese have been reported to have. Crossed eyes and a kinked tail are both considered natural to the breed though. Street Siamese cats in Thailand have them and most, if not all Siamese cats, used to be cross-eyed.

Those kinked tails and crossed eyes are likely a result of genetics. But there are a few legends surrounding the explanations for the Siamese cats’ physical peculiarities.

According to one legend, a group of Siamese cats was tasked with guarding a golden, royal goblet. Performing their duties, the cats stared at the goblet with such intensity that their eyes crossed. And because they wrapped their tails around the goblet for extra security, their tails became permanently bent. A Purrferred Cat Of Choice

There are many Siamese cat lovers that have a deep admiration for the breed, owning several of these lovely cats at a time. The origin of the Siamese cat breed is not entirely certain, but it is speculated that they lived in the royal palaces and with the Buddhist monks in Siam (now known as Thailand).

“I have taken the liberty of forwarding you one of the finest specimens of Siamese cats that I have been able to procure in this country,” he wrote to the First Lady. “I am informed that it is the first attempt ever made to send a Siamese cat to America.” Temperature Controlled To A “T”

If you look at the distinct markings of the Siamese cat, have you ever stopped to wonder why their markings are located in the exact spots that they are? Well, as it turns out, these markings serve as an indicator for the “cooler” parts of their body. As kittens, regardless of their predetermined points, they are entirely white all over their body. By one year of age, the kitten’s will have developed their established color pattern. So essentially, the cooler the part of the cat’s body, the darker the fur. 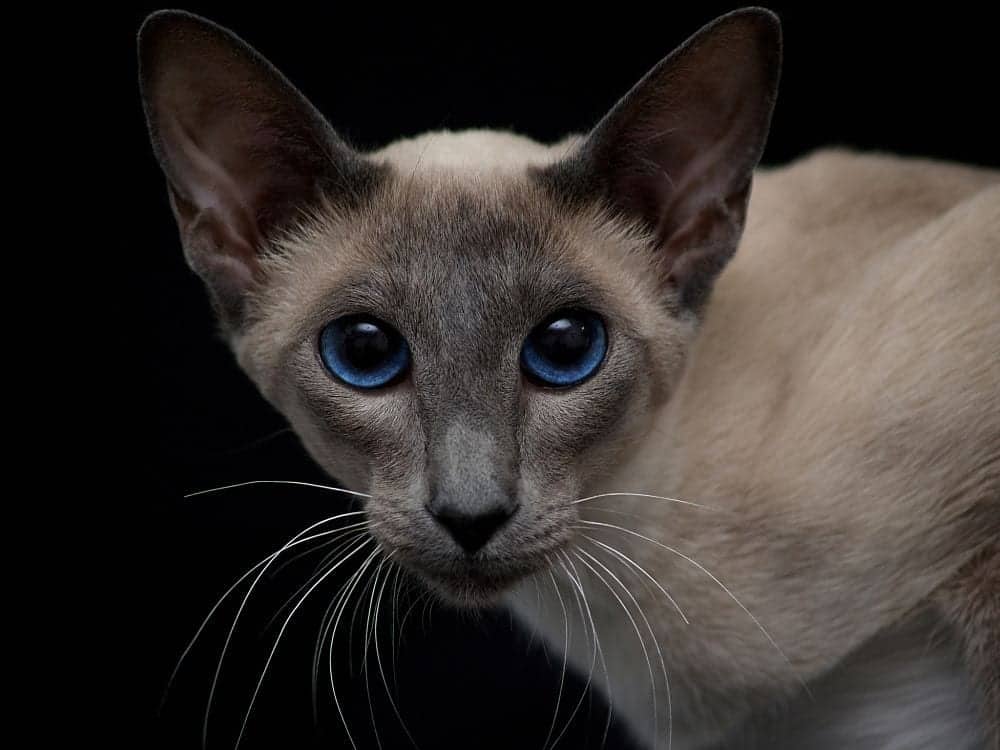 Want to dive deeper into these interesting points that the Siamese cats’ possess? Check out a detailed Siamese scientific coat color breakdown below!

The color of a cat’s coat is determined by several sets of genes and the patterns of their coats are determined by modifier genes. Genetics 101, right? Well, Siamese cats have a special modifier gene that inhibits pigment from developing in the fur, resulting in albinism. But, thanks to the magic of science, the modifier gene for albinism can only affect the cat’s fur above a certain temperature—or between 100 and 102.5 degrees, to be more precise.

Once a Siamese cat’s body drops below approximately 100 degrees—or the cat is in a colder environment—her genes for coat color turn back on and carry pigment to her fur. Because a cat’s body is cooler around her nose, ears, paws, and tail, that’s where pigment is most commonly deposited on Siamese cats. Most Siamese cats are born completely white and develop their markings in the weeks following birth. Why? Because the womb is very warm and blocks the cat’s color gene from reaching her fur. Following birth and being exposed to the cooler atmosphere for a few weeks, Siamese kittens will start to develop pigment around their faces, tails, and paws.

And this is not just a theory, it’s been proven through scientific research!

Scientists first tested the idea that Siamese cat coloring is temperature dependent in the 1930s by bringing Siamese cats to Moscow and caring for them in rooms kept at -3oC to 16oC (about 26oF to 60oF). This contrasts with the warmer temperatures in which the average pampered house cat lives. While the cats’ bodies were cream colored when they arrived in Russia, the cats eventually shed their fur and became noticeably darker in the cooler temperatures.

Baby Blues For A Specific Reason

While the Siamese can come in a variety of color points, all have distinct blue eyes the color of the sky. But why is this? Well, the gene that is responsible for the Siamese coat pattern also restricts the amount of pigment found in the eye–thus resulting in the signature pale blue color that the breed is known for. Shy and Sweet, And Undoubtedly Chatty

The Siamese cat breed is well-known in the cat world–for a blaring feature; their increased vocalizations. For cat lovers who share their home with one, they can attest to those mighty meows. This is a cat breed that does NOT do well alone for extended periods of time. Often shy and reserved, they are still very affectionate with those that they trust and love. These cats are as calm and gentle as they are beautiful, and they do great in a home that loves their cat to be seen and heard.

Do you have one of these gorgeous felines in your home? Share your Siamese cat photos with us in the comments!