The world may be missing the hilarious antics of office life in Scranton, PA, but now fans of the show can fill the void with a new face. It’s a bit furrier than what they may be used to. With a fur-miliar personality and quirky expressions, Michael Scott a.k.a. Dunder Kitten, is quickly gaining fans around the world. When 26-year-old Brittney Jernstrom from Tampa, FL rescued the mini house panther, she had no idea what she was in for.

My late senior cat Purr actually found Michael’s stray mama in our neighborhood. He took her in, let her hang out in our yard, eat his food, cuddle with him, etc. Later on she brought back her two very small kittens.

Mama cat Missy was very friendly, sadly meaning she was probably not a stray/feral to begin with. Her kittens however, were a different story. They were so skittish and refused to let humans near them–young kitten Michael Scott especially. Brittney never gave up on them though.

He was so scared I was pretty sure I’d never even get to touch him. I kept working at trying to get them to trust me, but it wasn’t until they were a little bigger that they finally started to tame down and let me pet/hold them. 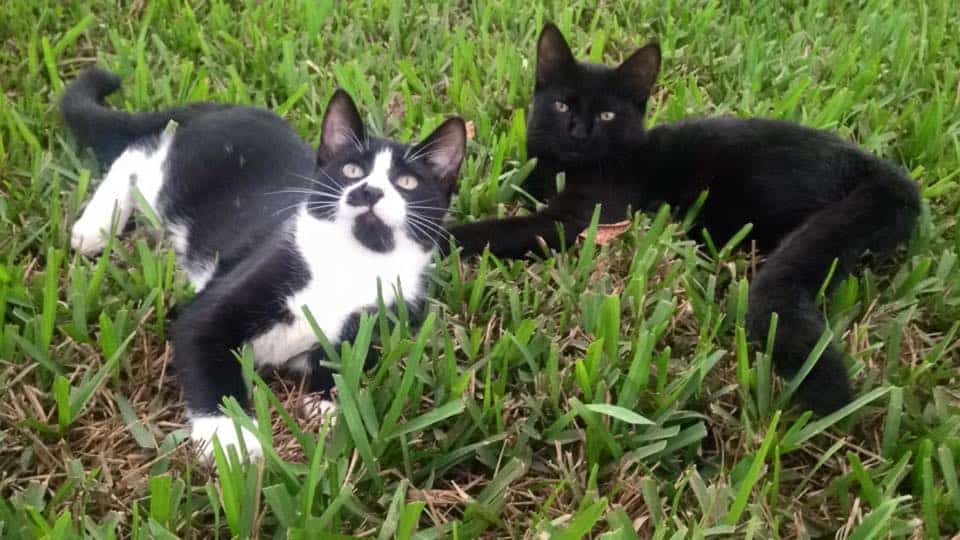 As the feral kitten began to come around, his purrsonality stood out like a shining star.

Now seeing his temperament and silly antics emerging, it was time to name him. Reviewing his traits to find the best name, the answer quickly became clear.

It’s hard to explain, but he just acted more eccentric than any other cats we’d ever owned. Like we noticed early on that he’d do stupid stuff just to be the center of attention. He had a big personality but was socially incompetent; was affectionate but loud and often obnoxious. He would pull cartoon character-level stunts.

Brittney’s brother, another fan of The Office, was the one who pointed out, “he’s Michael Scott!” The name stuck. But there was no plan on making him insta-famous. He was just their silly cat who reminded them of one of their favorite TV characters. When they found that he loved dressing in purrfessional attire, including his beloved kitty ties, the photos piled up.

It was on December 21st, 2017 that Brittney realized the world needed to share the silliness of Michael Scott, Dunder Kitten.

The first photo of him in his fancy tie was shared on his new Instagram page. Shortly after @Cats_of_Instagram noticed the funny feline. Since then, photo shoots inspired by the TV series have brought joy to his 3,000 followers. We can only imagine that Dunder Kitten is going to be bringing smiles to many more soon!

Everyone knows that an office cannot run on supurrior meownagement alone though–it’s a team effort. Michael Scott loves the limelight and being the World’s Best Boss of his furry co-horts.

He thinks he’s hot stuff. We have a few designated spots around the house we take pictures in and sometimes he’ll go there and just sit and pose on his own waiting for me to take pics of him. Definitely a natural model/comedian.

Under his watchful eye, the organization consists of 4 other cats; Missy, Rocky, Patch and Pippin, as well as pup Scooby.

Happy New Year from the @dunderkitten crew! ?? . . It is really hard getting a good group picture. Not everyone wanted to be a part of it. But I’m sort of an expert in Photoshop, so I’ll add everyone else in later. ??

Many times you can find Patch at Michael’s side, supporting him in a very Dwight Schrute, Assistant to the Regional Manager way.

Michael: Rocky, that’s my spot. I called dibs. You do respect dibs, don’t you? – Rocky: I’m not a barbarian. – – #assistanttotheregionalmanager #dunderkitten

When we all need to hear a few words of encouragement, Dunder Kitten is happy to share his wisdumb! LOL

Everyone said to Vincent Van Gogh, “You can’t be a great painter, you only have one ear.” And you know what he said? “I can’t hear you.”

Sometimes in life, you need to let your inner voice out to really be heard. Never be ashamed of who you are!

For cat Michael Scott, he’s taken a page out of his human namesake’s book. And we couldn’t be more pleased to see some furmailiar faces!

Prison Mike will show all those other strays and ferals how good life on the inside CAN be!

I stole. I robbed. And I kidnapped… the President’s son. And held him for ransom. I never got caught neither! – #prisonmike #michaelscott #ellenratemycat

Michael Scott seems to go through the same issues as the rest of us right? Grilled feet? Come on, who DOESN’T love to wake up to the smell of bacon?

Most nights before I go to bed, I will lay six strips of bacon out on my George Foreman Grill. Then I go to sleep. When I wake up, I plug in the grill, I go back to sleep again. Then I wake up to the smell of crackling bacon. It is delicious, it’s good for me. It’s the perfect way to start the day. Today I got up, I stepped onto the grill and it clamped down on my foot… that’s it. I don’t see what’s so hard to believe about that.

Deep thoughts on the water bowl?

With 9 seasons of comedy and chaos to choose from, we’re very much looking forward to more of the catty Michael Scott! Be sure to follow Dunder Kitten on Instagram!

What better mascat to show the change from one feral street kitten to a sleek, purrfessional businesscat?!

All it takes is time, patience and a classy tie <3

That’s what I said, milk and sugar. I drink this every morning. . #HappyMonday!