Jen, “the Kitten Agent,” a rescuer from southern California, took in a sweet mama kitten named Mother Goose who was struggling to care for her four silver tabby kittens. She was malnourished and unable to produce milk for her litter. Such is often the case for cats on the street which is one reason why TNR (trap, neuter, return) programs are so critical everywhere.

When she arrived from the Devore Shelter in San Bernardino, Mother Goose was only about 9 months old. She was just an emaciated baby suffering from a severe upper respiratory infection and urinary tract infection. Her eyes watered from the infection, one of the worst Jen had seen, but she was still friendly and wanted cuddles. The little silver tabby cat family had been in the shelter for two weeks, and the sickly kittens were about 6 weeks old. Despite this sad beginning, Jen described Goose as the “most cuddly mama ever”. She knew right away that Mother Goose would be an ideal companion for a lucky family when it was time.

“Mother Goose is so desperate for all the attention all the time!” she said. “She is one of the most affectionate mamas I have ever fostered (maybe even the most).” 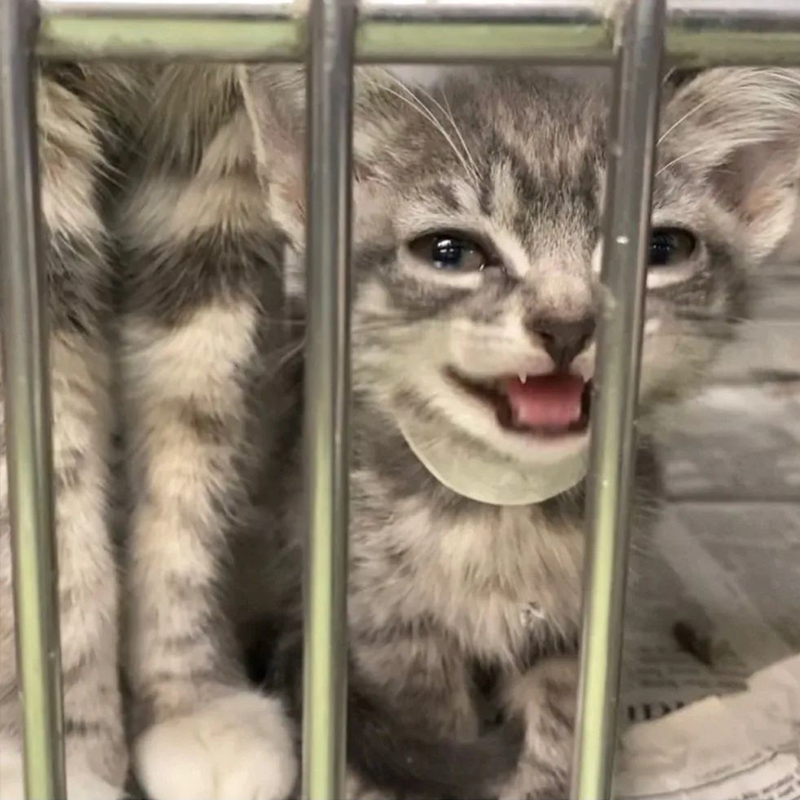 The babies, Hickory, Dickory, Dock, and Clock, were underweight and suffering from the same infections, watery eyes, and malnutrition. However, the Mother Goose Kittens were “full of fighters determined to live!💜”

Hickory – Looks just Dickory but with more white on her legs Dickory – looks like Hickory but has no white on her legs, bright pink nose and white toes, “lap kitten extraordinaire” who later bonded with Dock. Dock – has a distinguishing nose freckle and bonded with Dickory. Clock Was the Smallest with Oversized Ears and Eyes

Clock was tiny, the size of a 3-week-old kitten at 381g. Her first pictures from the rescue were shocking as she looked like a sad Yoda with existential dread, but she recovered first in foster care. After syringe feeding, she rapidly improved and started gaining weight. Possibly, she would need treatment for her overbite, but it wasn’t slowing down her eating.

“This was taken right after arriving in rescue from the shelter and was taken by Christina when she held the family for a day. She had already grown into those ears a bit by the time I got her 24 hours later, but boy is she still cute! She is definitely a mood and probably lots of memes!🤣💜” 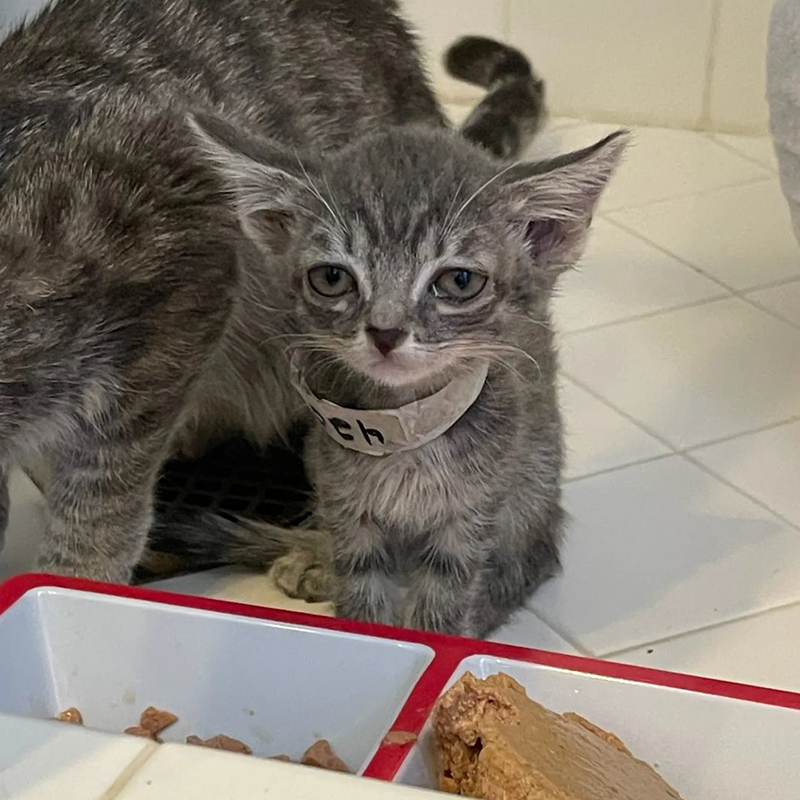 Regardless of how she looked, Clock was very sweet and had her foster mom Jen wrapped around her tiny paw. The video below would also be the one that would later change Clock’s life forever (More on that later).

Mother Goose and the Kittens All Recover

When there are so many sick kittens, things can quickly go south, but thanks to Jen, Mother Goose and her babies all recovered. Their watery eyes eventually healed and grew wide as saucers.

“They really got here just in time..they wouldn’t have had much time left,” Jen said. “It took a lot of time and work and a vet visit, but everyone is doing so great and are totally normal and happy and healthy kittens! Makes a foster mama proud (and relieved)!”

Mother Goose was feeling so much better and began being a playful kitten.

“The many faces of “dis my mama!” Dickory looooves mama Goose. Mama is just a baby herself, likely only 9 months old! She loves attention and affection and she is starting to play and have zoomies now that she is feeling better from the URI and isn’t malnourished! It is such a huge transformation in such a short time! Fostering really does save lives!” Of all of the Mother Goose Kittens, it was Clock who stopped time to get noticed. Her bug-eyed appearance and Grumpy Cat-like expressions in such a tiny package made everyone fall in love with her even more. Fortunately, a vet found she didn’t have neurological problems but may have a “genetically oddly shaped head.” Even better, her teeth appeared to be doing ok too but would need a checkup when she was older. “Scientific proof that Clock is an actual angel here on earth! When I walked in and caught her in the middle of the marshmallow bed, looking up like this…😍🥰” On a clockwork basis, fans wanted more of Clock and her cutely spotted belly that needed lots of rubs.

“Clock is very disappointed in me and said that her foster mama needs to learn how to tell time better because her fans are waiting for her daily post! How can her name be Clock and I can’t tell time, she says! 🤣 “ 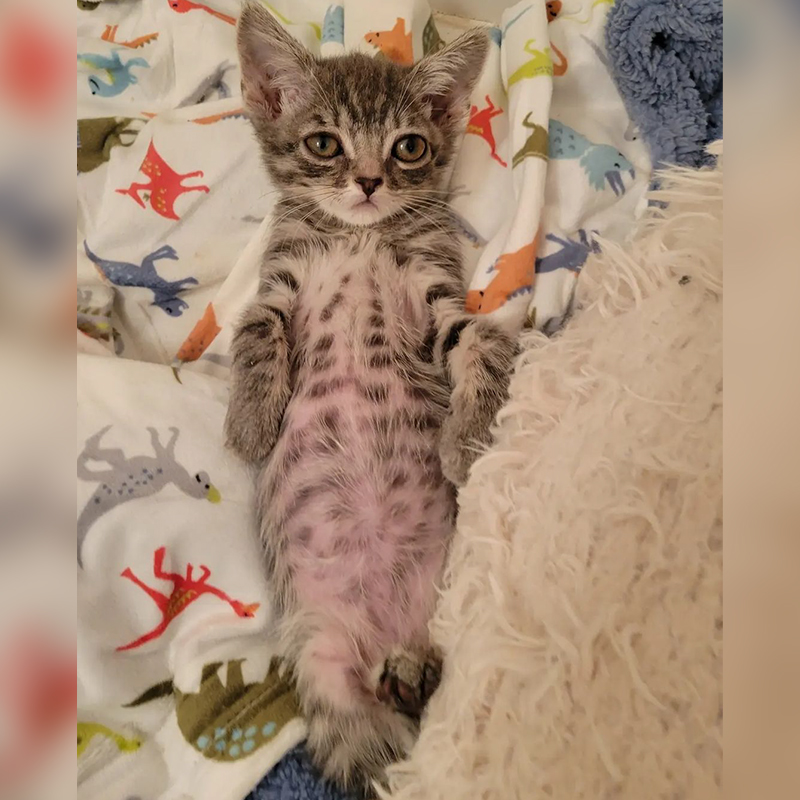 In late October, bonded buddies Clock and Hickory found their forever home together, which you can follow here as the “Ohana Kittens.”

Their new mom Anne had seen the video above of Clock when she was a tiny tot and was compelled to help her.

“I was randomly scrolling reels and saw this video from @jenfosterskittens,” wrote Anne. “When I heard this tiny meow, something happened inside me…I felt so compelled to give her a forever home.”

Then, she decided to bring home Clock’s bonded sister Hickory too. Now, Clock and Hickory received their forever names too.

“Clock’s best friend was Hickory so that’s the sister that came home with us too! We renamed them Lilo Clock, and Nani Hickory, after the sisters from the movie Lilo and Stitch. Lilo and Nani are the sweetest girls. Lilo is only a little over 3lbs, and Nani is a little over 5lbs so since Nani is the bigger kitten she’s the big sister like in the movie. Together we are a new Ohana.” Grown up Hickory and Clock

Now, bonded sisters Dickory and Dock are seeking a home together. And so is Mother Goose, the sweetest kitty ever. Dickory and Dock sit together in a cat tree

“Mother Goose and Dock in a chair. I still can’t believe that I still have these kiddos (and Dickory). If you had told me that it would be hard to get silver tabbies adopted, I wouldn’t have believed you,” wrote Jen. “The last time I had a silver tabby tux, I had people beating down my door for him. 🤷‍♀️ here in CA, kitten season never fully ends. There are still kittens who need help and I get requests every day and I have to say no because my kitten room isn’t open. Help us get these three (and some of the others that our other fosters have) adopted so we can say yes again! 💜” You can learn more about Mother Goose, Dickory, and Dock on Instagram/jenfosterkittens. 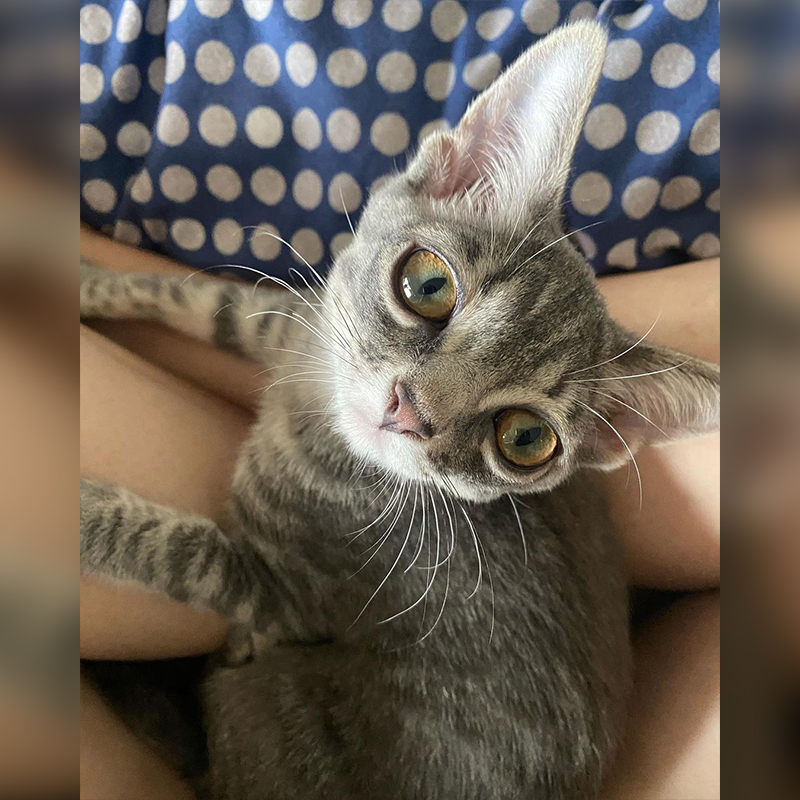 Clock in her forever home