Rescuer Jenny from Northern Virginia took in two precious tiny kittens in May, later named Barlee and Bartleby. When Barlee arrived, Jenny called the teeny tiny tabby kitten Bartholomew until she later discovered he was a she. At just two days old, the bottle baby was all alone, and nobody knew what became of the kitten’s mother or siblings.

“Meet Bartholomew 😻 This Lil guy is just a couple days old. He’s a solo baby, which always worries me a little because what happened to his siblings/Mom 😕 ? “ Jenny shared. 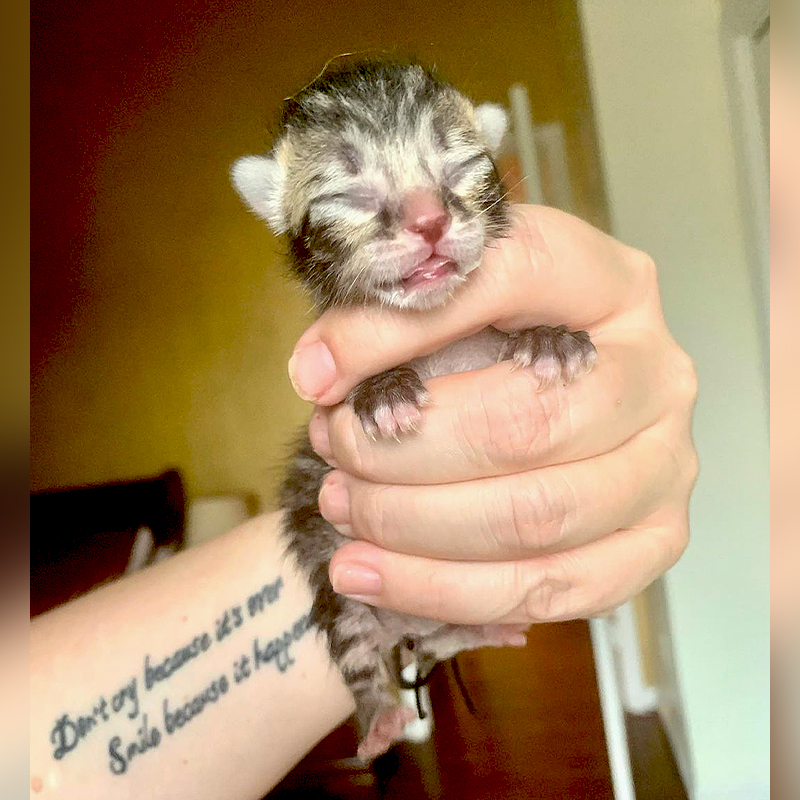 Three days later, Jenny took in another “solo guy,” grey kitten Bartleby. From the start, he was a vocal and “spunky Lil dude.” The grey kitten’s mother abandoned him in a shed after dogs spooked her. Then, she never came back for him.

“Momma cat had moved the litter and he was left behind,” she explained.

Fortunately, a kind family rescued him and, by way of another rescuer, he made his way to Jenny. He was in foster care just hours after being born. The foster mom knew the kitten would pair up well with Bartholomew/Barlee after a quarantine period to be safe.

“Kittens need companionship, and these two will greatly benefit from having each other!” Jenny said. Although so tiny, Barlee had a strong appetite, doubling in size in a week. At that time, she opened her eyes to the world for the first time. Meanwhile, Bartleby proved to love the bottle, too, growing strong. Even so, he lost most of his tail for unknown reasons, leaving a “cute little nub.” So, he became officially known as “Bartleby van der Nubbin.” “For ‘his’ two-week birthday, Bartholomew decided to surprise me. He’s a she! 😹 And that’s how Bartholomew became Barlee 😻.”

By three weeks old, Barlee was a chonky monkey. She and Bartleby would soon move up in the world and out of the incubator.

“Barlee is a little over 3 weeks old now 🥳 She’s a chunky monkey and weighs almost a pound already. This girl loves to eat; she’s such a good bottle baby! [She] and Bartleby will be moving out of the incubator this week and into some new digs!” At five weeks old, the two reached a big milestone. At this point, Jenny could feel confident they would continue to do well. When the kittens were seven weeks old, Jenny had to say goodbye, taking the kittens to a friend who also fosters kittens, Sara in Arlington.

“I’m going to miss his goofy demeanor and his insistence on cuddling on my chest; nowhere else was good enough,” she said of Bartleby van der Nubbin. Barlee and Bartleby Grow Up Together

Now in Arlington, everyone following the kitten’s progress could happily do so with foster mom Sara. By now, Barlee was developing the cutest little white toes. As always, Bartleby was hungry. 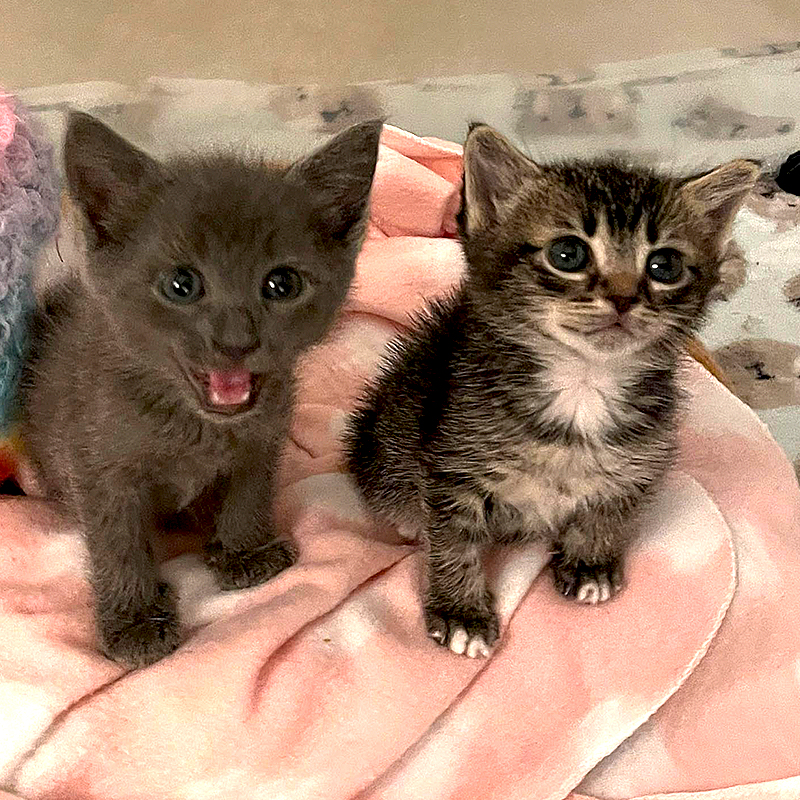 Now, the two bonded kittens could spend time together in the ‘bed cave.'”

“Barlee & Bartleby in their bed cave 🤍” Barlee in a Jail of Her Own Making

Barlee had a viral moment in mid-July when she cried out for her foster mama, looking quite pitiful. But a second later, she discovered everything was ok.

“Barlee, that wasn’t so hard. You weren’t in jail!” says Sara. “Barlee is in a jail of her own making 😹”

Meanwhile, Bartleby was becoming quite the charmer.

“BARTLEBY 💘 he is checking off stereotypical grey (aka blue, aka maltese, aka greybie) traits: curious, affectionate, snuggly, purry, playful, silly, and quirky 🤪” To see what happens next, you can follow along on Instagram and Jenny’s Animal House for more rescues in Northern Virginia.