Brooklyn “Cat Wrangler” Heidi of Heidi Wrangles Cats shares the story of Spring, a feral cat with an adorable black heart on his nose.

“His little heart nose proves he is made of love,” Jess of CaM says of this kitty. In mid-April, Heidi pulled off quite an impressive feat capturing Spring and a younger kitten Bud at the same time. What makes it so amazing is that she caught them simultaneously in two separate traps, a box and a drop trap. And, she did it all while hiding in her car, waiting to pull the string. Certainly, she draws on considerable expertise conducting Trap, Neuter, Release (TNR) efforts in the Brooklyn area. As the warmer weather is coming, rescuers and shelters will be up to their ears in kittens needing rescue. First, Bud, the black and white kitten, appears at the box trap baited with sardines. In the doorway, a metal water bottle with a string around it allows Heidi to spring the trap manually. Soon, Bud goes inside but darts back out nervously.

“And, he’s outta there but that’s ok because we still have a second cat we’re waiting on,” Heidi explains. 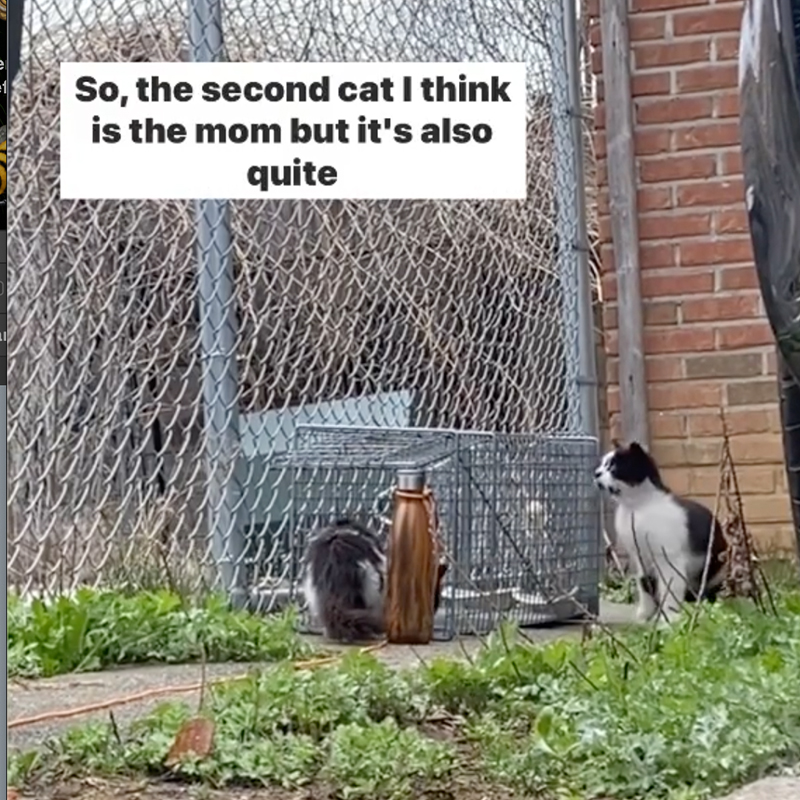 Then, Spring appears nearby, and you can see that big heart from a mile away. At first, she suspects Spring may be the momma but later learns she is actually a he.

“So the second cat, I think, is the mom but it’s also quite small so I’m not totally sure,” she says.

“Oh my god just look at that face,” she says of Spring. In the foreground, Heidi is prepared with a larger baited drop trap. As she watches, Bud goes into the box trap while Spring moves in on the drop trap.

“I just knew I was going to need both traps,” she says. “I couldn’t get my drop trap close enough to the fence and I knew it was going to be hard to get both in the box. So, I set up both and look, it worked.” Next, it was time to give a very matted and dirty Bud a bath. As Heidi washes and grooms him, Bud is so gentle as “supervisor Davey” watches on.

“Bath time for our newest rescue, Bud 🌷 He clearly had a hard time managing outdoors with his long coat and came to us very matted and dirty. I shaved off several mats before this bath 💔” 🖤 Others Had Been Trying to Catch Spring for Months 🖤

In an update, Heidi explains that another rescuer had been trying to trap Spring for months without success.

“Apparently, they had been trying to trap [Spring] since he was an 8-week-old kitten,” Heidi says. “But he had always evaded their traps and soon disappeared after that. She had been worrying about him and it just made me all the more glad that trapped him and brough him inside.” Would Spring Adjust After 6 Months Feral?

Now safely indoors, it was a big question if Spring could adjust to domestic life. After all, he had grown up feral and may never have trusted humans. In many cases, cats will remain feral, which brings rescuers to the often difficult R for release part of TNR. Wherever possible, rescuers would prefer to give cats the “VIP life” of an indoor cat, as Heidi has referred to it.

After a week with Spring, it was touch and go until Heidi had a breakthrough.

“And to be frank, I questioned whether TNR’ing him would be the right choice, but after a week of being totally miserable, we had this amazing breakthrough,” Heidi says. As you can see in the video below, Spring is eating from her hands and begins to allow belly rubs, a sure sign of trust.

“I can’t even begin to describe how relieved I was seeing this because the thought of TNRing him was just torturing me,” she explains. “He still has a way to go to be socialized but I’m so excited for his future. I love you Spring.” Thus, it would seem that Spring is headed for the spoiled and protected life of a house cat and won’t be returning to a feral life ever again.

Previously, we shared the story of rescued kittens Jive and Waltz, who Heidi also provided with the “VIP life.”