When you’re tiny, trapped in a storm drain, and soaked to the skin, the world must seem like a very scary place. Maybe that’s how little kitten Ginger Biscuit was feeling until one kind person rescued him and brought him to Greenside Animal Hospital in Johannesburg, South Africa. Staff didn’t know anything about this little fellow’s health, so they placed him in the isolation ward, to give him a chance to rest and recover in peace. 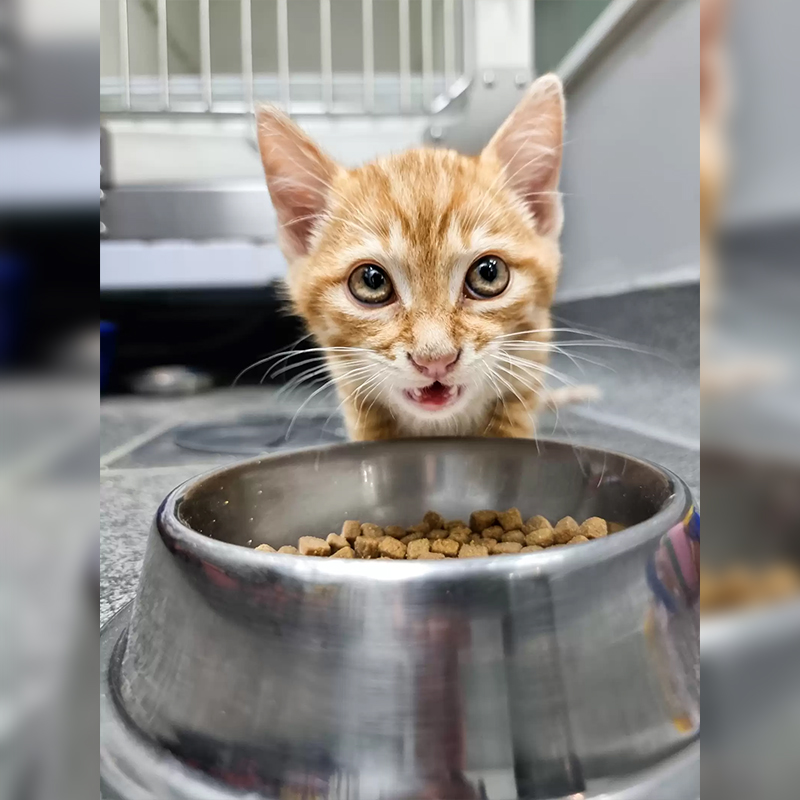 The Isolation Ward Was A Scary Place

But Ginger was afraid at first. Everything and everyone was larger than he was, The Dodo reports. At only 8 to 10 weeks old, his world was now full of unfamiliar sights and sounds. This, of course, means Ginger was a little nervous whenever the staff provided care.

“[Ginger] is shy but very loving and likes attention once he has overcome his initial fear of contact with our team who cares for him,” Drs. Joubert Viljoen and Suzette Greube, the hospital’s owners told The Dodo. “He is a bit wary of people when they enter the isolation ward until he sees us bringing food, then he is happy to creep out of his shell and interact.” Anne via The Dodo/Greenside Animal Hospital

Ginger had the isolation ward to himself, except for a little dog named Anne, who was also quite scared.

Like Ginger Biscuit, Anne was brought to the hospital as a stray. The little black-and-tan dog was found hiding in a bush at a local sports club. One of the trainers at the sports club brought her in and hospital staff found poor little Anne was absolutely covered in fleas and ticks. She was very sick as a result. They immediately got to work healing her and placed her in the isolation ward where she could rest.

Cats and dogs are generally kept in separate areas at the hospital, but the isolation ward is an exception. Anne and Ginger’s cages were across the room from each other. Staffers were certain there was no way they could come in contact with each other.

At least that’s what they thought. Until Ginger proved them wrong.

But one day, employees walked into the ward and couldn’t believe their eyes. Ginger’s cage was empty and they found the tiny orange kitten cuddling with Anne in her cage.

“We underestimated the kitten’s abilility to wriggle itself through the door of the cage he was placed in,” Viljoen and Greube said. “With the little dog being so weak we never considered her to be a risk to the kitten, but when we saw them together the first time around, there was definitely a moment of panic, seeing as some dogs don’t react well to cats and vice versa.” 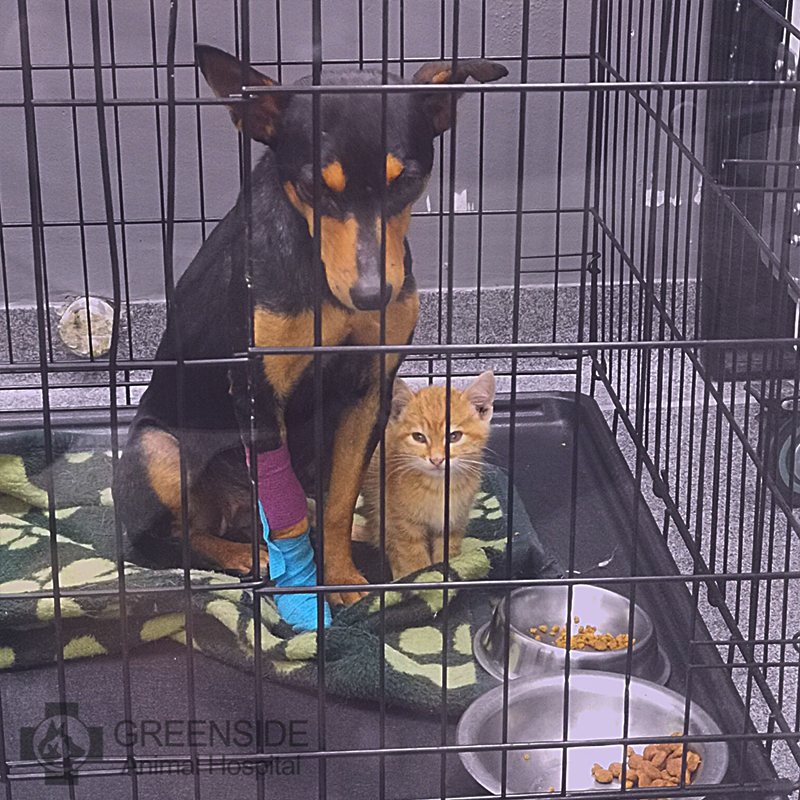 But their worries quickly dissolved when they saw how gently Anne treated Ginger. Quite obviously there was a lot of love between this kitten and dog as they kept each other calm. Even so, the staff tried to keep them separate. But that was all for naught. Ginger and Anne preferred each other’s company. They wanted to stay together and that’s simply the way things were going to be.

“After initially discovering them together, we moved the kitten back into his cage, as his litter box, food and water was in there, but he immediately made his way out of the cage and back to his friend,” Viljoen and Greube said. 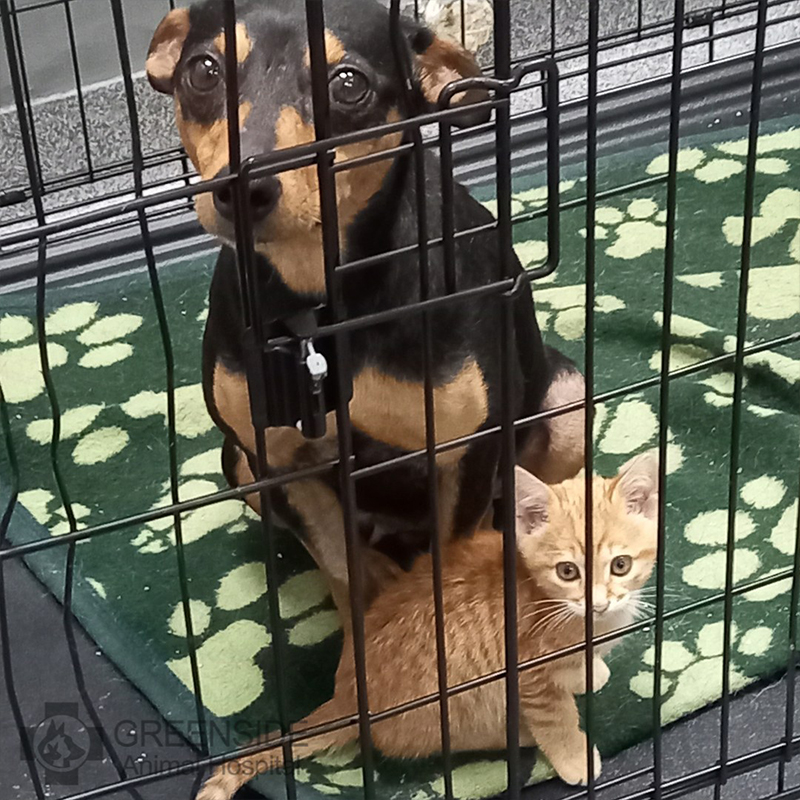 Now Anne and Ginger get to share their crate and they are much happier for it. Anne was very weak when she arrived at Greenside hospital and having Ginger there to comfort her is helping her recover and gain strength. He’s a little someone Anne can focus on and care for, and for Ginger, Anne provides a sense of calm and safety. Something he rarely had before.

“It is definitely a case of ‘yours, mine and ours,'” Viljoen and Greube say. “They love to snuggle and even have meals together. They have toys but the kittens’ favorite pastime is chasing Anne’s tail!”

No More Being Alone In The Isolation Ward.

“In a time of war, separation, and aggression in the human world, it is cathartic to witness such a great example of peace and comfort between different species in the animal world. We are inspired by this experience and hope for peace and healing for humankind!” How amazing is it that two such different animals can establish such a beautiful friendship? These two beautiful babies are simply precious together. This is definitely a testimony about the power of love. 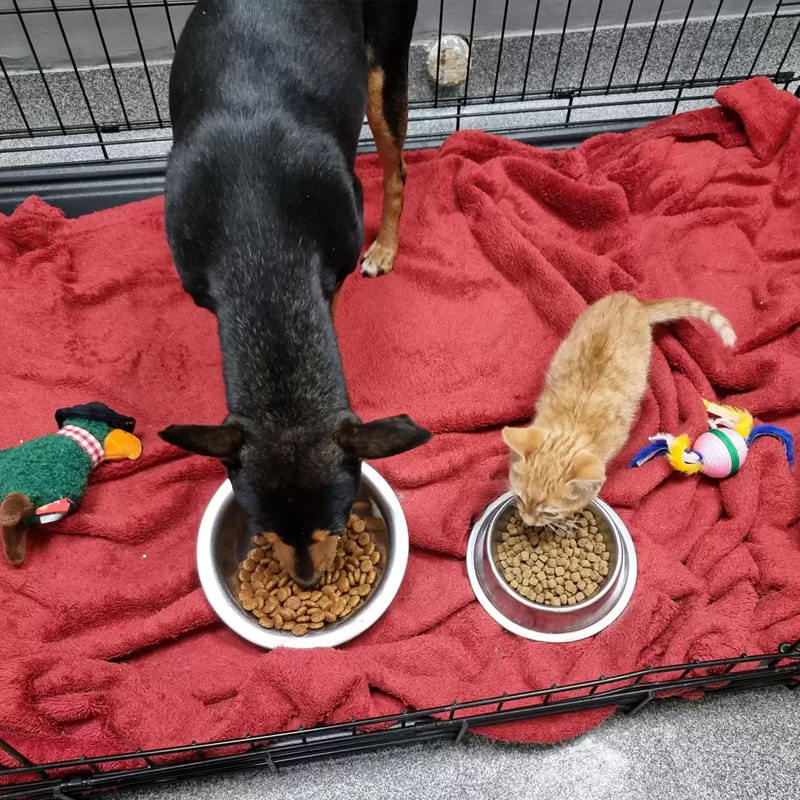