Rescuers have saved a rare albino jaguarundi cub in Colombia. Amazingly, this is the first time such a cat has ever been confirmed in the South American country below Panama. Now, the pure white cat with pink eyes will live out its life in a conservation park in Medellin, the “City of Eternal Spring.”

According to Local12, the jaguarundi is a female. She was found some distance from the Aburrá Valley metropolitan area. “Authorities worked with the volunteer fire department to rescue the feline. Which was approximately four hours from an urban area,” said Amalfi Municipality vet Yuliany Duque. “Once the feline arrives at our facilities, primary medical attention will be carried out. And relevant authorities will be notified, in this case Corantioquia (region), for its subsequent transfer to Medellin.” Video by Reuters below:

Vets Work Around the Clock to Save the Cub

Now, Colombian vets are working around the clock to nurse the cub back to full health. Veterinarian Carlos Madrid explained that the cat would need to remain in captivity since she would be vulnerable to predators. 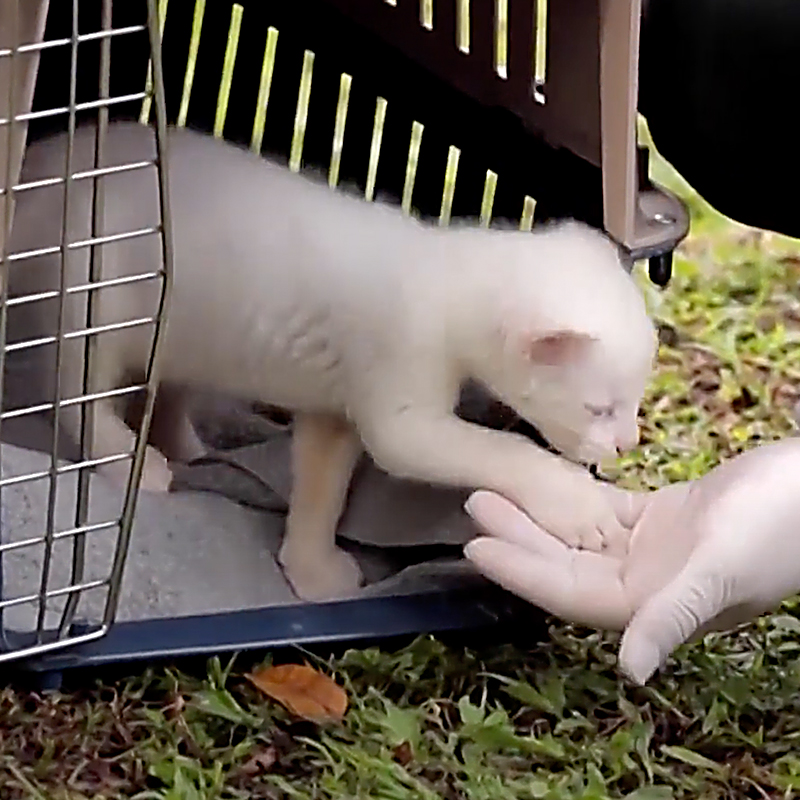 “At this point, this animal cannot be released to the wild due to its albino condition,” said Madrid. “It is predisposed to certain health disorders, certain disadvantages when performing in the wild. Such as the impossibility of camouflaging itself, making it easy for it to be seen by its prey. Therefore, the only alternative for it is to end his life in a park such as this.” In extremely rare cases, albino animals can thrive in the wild. Such as the group of nearly 100 albino squirrels in Olney, Illinois. In Olney, the white squirrels are protected by laws to discourage motorists from hitting them. Always, albino animals are targeted by hunters, poachers, and the exotic pet trade. The Jaguarundi in the Wild

A jaguarundi is about twice the size of a domestic cat. And they’re usually brownish-gray, black, or reddish, weighing from 6 to 22 pounds. But their unique characteristic is the flat otter-like tail and weasel-like appearance with a small flattened head and small ears. According to historical accounts from Mexico, they are strong swimmers and enjoy the water. Sometimes they are confused with large black feral cats. But these unique animals have much longer tails. And unlike ocelots, they tend to be active during the day. Jaguarundis are a type of puma. And their range extends into North America, once living in Texas. They are now considered extirpated in Texas. Sadly, with the last confirmed sighting in Brownsville in 1986. Nevertheless, there are occasional sightings. Even though there have been only five confirmed sightings in Texas history, Texas Monthly states. But South of Texas, the cats continue to roam Mexico. Red morph Jaguarundi by Cédric Gravelle via Wikipedia, CC BY 2.5

On the other hand, there may be a small feral population in Florida after captive cats escaped in the 1940s.