Cat Tails: Fun Facts And Photos Of Kitty Tails From Around The World

Whether they’re short, striped, fluffy, rumpy, or long and slinky, I am always mesmerized by cat tails. But “reports” say cats only have the ability to speak to us in meow code. So we must turn to the tail to figure out what it is that they’re trying to tell us. Body language is very important when it comes to decoding your cat’s mind. Along with ears, tails fall high on the list of cat body language we must attempt to decode. Cat tails are mesmerizing to look at, and each cat’s tail is unique to them—but there are some breeds of cats with particularly interesting tails.

Here we’ll break down for you some fun facts about kitty tails and share images of cool cat tails from cats around the world. Enjoy! When we think of cats with long, fluffy tails, often the Maine Coon cat comes to mind. Did you know that the Guiness Book of World Record holder for the cat with the longest tail is a Maine Coon? Not all too surprising given the larger size of these cats which typically equates to a longer tail. Along with Maine Coons, there are a few other breeds that are well-known for their long tails. These cat breeds are the Siberian cat breed of Russia, the Nebelung (picture a long-haired version of a Russian Blue cat), Norwegian Forest Cat, Balinese (think long-haired Siamese), and the Siamese cat which sometimes has a kinked tail. The Maine Coon cat who holds the record we mentioned above has a tail that is 17.58″ in length! Cygnus’ long and luxurious tail is certainly easy to admire. But navigating everyday life doesn’t always prove easy for this record holder. And it comes with its challenges his owner reports. Since Cygnus’ tail extends so far out from his body, he often accidentally dips it into things unintentionally as he moves about his home. Ooopsie!

Cat tail fact: on average, 10% of the bones in a cat’s body are found in their tail, with around 20 vertebrae found inside each tail. The Kurilian Bobtail cat of Russia

Have you ever heard of a Wedgie? That’s actually the cute nickname of the Norwegian Forest Cat breed. This old cat breed of Norway was coined “skogkatt” by the people of Norway centuries ago, which literally translates to “forest cat” in English. These “Viking” cats were said to have made their way over to the United States on—you guessed it—Viking ships. A favorite of many cat lovers, these long tailed cats are similar to the Maine Coon cat in appearance. But one of the most distinctive differences between the Maine Coon cat and the Norwegian Forest Cat is the shape of the head. The Wedgie has a head which is more triangular shaped, while the Maine Coon head is characteristically blockier and wide. Either way, they’re both purrfect with majestically fluffy tails! The Mekong Bobtail of Thailand

There are a few breeds that instantly come to mind when we think of cats with shorter tails. Many fall under the bobtail cat category, such as the American Bobtail, Pixie Bob, Highlander, Mekong Bobtail, and Kurilian Bobtail. Despite the “bobtail” breed name, these cats are not closely related to their Bobcat cousins. Think of them as looks wild, but totally mild! The domesticated feline known as the American Bobtail is a beloved breed of many cat people, and it’s easy to see why given their fetching good looks, adorable little tails, and awesome personalities which the breed is known for. The American Bobtail cat is a larger cat breed, on average weighing in around 16lbs. They typically have a tabby coat that is somewhat shaggy, almost as if they’re always ready for the colder months. Their shorter tails are naturally occurring and true to the breed, and come as a result of a naturally occurring mutation. These highly intelligent cats are laid-back, loyal, and often do well in a family with dogs.

Interesting American Bobtail cat fact: according to VetStreet.com, some psychotherapists have included American Bobtails in their treatment programs because of the cats’ sensitivity to human emotions.

Want to learn about a bobtail cat breed that was discovered in Russia centuries ago? The Kurilian Bobtail cat breed was discovered over 200 years ago. They were found on the Russian island of Sakhalin and the Kuril archipelago. This archipelago stretches all the way up to the Japanese island of Hokkaido. So it’s believed that these gorgeous short-tailed cats might come as a result of crossbreeding with the Japanese Bobtail. While the Manx cat is usually the first that comes to mind when we think of tailless cat breeds, the truth is that the Manx cat can actually have somewhat of a tail. For the Manx cat, their naturally shortened tail comes as a direct result of a naturally occurring genetic mutation. More times than not, Manx cats usually have short, stump-like tails. But technically speaking, there are a few variations in tail style for the breed. A Manx cat can have be defined by any of the following: Rumpie, Riser, Stumpie, Stubbie, and Longie. While not as popular in the States, the Japanese Bobtail is another cat which is famous for their naturally occurring tailless look. These cats have strikingly similar features that the breed is known for. And the Japanese Bobtail is quite popular in many parts of Asia. These cats are known for their small to medium-sized bodies. Usually with white coats and larger patches of typically black or orange fur. All ending in a short, rumpy tail that almost makes them look as if they were a rabbit and not a feline

Cat genetics are quite interesting when it comes to tails. Did you know that the tailless gene found in felines is actually a dominant gene? This might help explain why there are so many naturally occurring tailless cats running around!

Share with us in the comments section if you have a cat with a special tail in your life!

Related Story: Cat Behavior: Here’s What Your Cat’s Tail Is Trying To Tell You 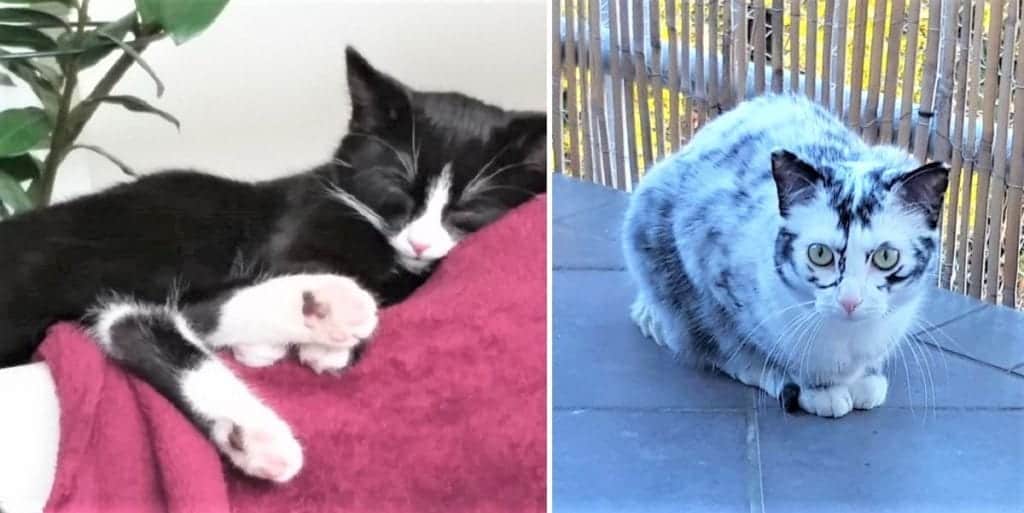