For Rubble the cat, he’s lived a pretty good–and long–life. His owner, Michele Foster, of Exeter, Devon, England took him in as a kitten in 1988. And for the past 30 years, she’s called him her best fur friend. Now, we can all share in the celebration of the world’s oldest living cat!

A Comparison of Rubble Then And Now: Some cats have lived remarkably long lives, but on average a cat who resides exclusively indoors typically lives for 13 to 17 years on average. So it goes without saying that this milestone birthday is most impressive!

“He’s a lovely cat, although he has got a little grumpy in his old age. I got him just before my 20th birthday when he was a kitten,” says Foster. He was part of a litter cat that my sister’s friend had and I had just left home. I was lonely living on my own so got him in as a kitten. It was in May 1988.”

If you’re wondering just how old Rubble would be in human years, it’s predicted that he is somewhere around 137–whoa!! For his special day, Rubble was treated to a party at his veterinarian’s office, complete with balloons and a free wellness checkup, along with his favorite cat food! Many of you might know of Creme Puff out of Texas who was the oldest living cat ever on record, who was born on August 3, 1967, and lived until August 6, 2005 – an amazing 38 years and three days. 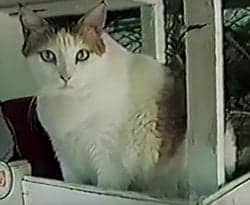 And despite his ripe old age of 137 in human equivalent years, Rubble is in great physical health:

“He is on medication for his blood pressure but apart from that, he is in remarkably good health.” But when Foster was asked about the possibility of taking the world’s oldest title for her feline friend, she says she has no interest in doing so:

“He has plenty of life left in him yet, but I don’t think we will go down the Guinness World Record route as I am not sure he would like lots of people coming to see him or a fuss being made out of him. Rubble is old now and would not like too much attention or be hassled. We would prefer if he was just left to live out his old age in peace.”

And given how handsome and healthy Rubble is, we feel like she’s respecting his wishes and he’s most grateful for it. Maine Coon cats are well-known for their magnificent coats and striking appearance, and Rubble is still a looker even though he’s a super senior feline! Such a handsome mate!

How Does Rubble Compare To Other Super Senior Cats?

The previous world’s oldest living cat in the Britain—Nutmeg from Tyne and Wear—died in September 2017. Rubble has now matched the age of Scooter, a Siamese who also achieved the age of 30. Scooter was also recognized by the Guinness Book of World Records but sadly died in his 30th year.

So what is Foster’s secret for helping her feline best friend to live his best (and longest!) life possible? Well, here’s what she says…

Another throwback of this handsome Maine Coon cat… What’s your “world’s oldest” cat you’ve ever had in your life? My ginger tabby from childhood, Pookie, lived to be 16 years of age. I was grateful for every moment we had together. Share with us in the comments section and tell us about your super senior kitties!