Foster mom Laura G from Winnipeg, Manitoba, is back and sharing the story of a hostile feral cat who gave birth to four kittens shortly after rescue. Although she would remain very much feral, the kittens became the sweetest love muffins.

At the time, Laura was caring for a “meowntains” of kittens.

“Caturday Saturday, Outtakes edition! And what goes better with outtakes…. than a Dad joke? Question: What do you call a pile of kittens? Answer: A Meowtain 🏔” Bingo, Bango, Bongo, and Beauty Born to a Feral Cat

In early May, Laura took in a feral mama cat named Barbara and her four babies: Bingo, Bango, Bongo, and Beauty. Rescuers saved Barbara from a bad situation, and then came the kittens.

“Momma came into the rescue as a very pregnant feral kitty pulled from a hoarding farm. She gave birth almost immediately after being rescued and has been in full blown protective mode ever since,” Laura G said. As a feral cat, Barbara was quite hissy with her rescuer and protective of her little ones.

“The level of hate mom has for me is on par with the level of love she has for her babies,” she said.

Nevertheless, the goal is always to keep the mother cat with her babies since nothing can replace what she can offer them. So after the kittens reached about five weeks old, Barbara could be spayed and return to the outdoor life she prefers.

Around two weeks old, the kittens were sick with diarrhea, which can be deadly when they are so tiny. So the rescuer started them on antibiotics as they seemed otherwise fine and beginning to open their eyes. By three weeks, even the tiniest one, Beauty reached a healthy 200 grams. Around four weeks, Laura G started “upping her game,” giving the kittens more personal attention and cuddles for a few hours each day. That way, they could develop a bond with humans, which would be vital for them to find forever homes. Before that, she limited interaction to ensure Barabara gave them her undivided attention.

“Now that these cuties are 4 weeks old it’s time for me to up my game! They’ll still spend the majority of their day with momma, but for a few hours each day we cuddle, we kiss, we play…and they LOVE it! These 4 will be social butterflies GUARANTEED 🖤”

In early June, Bingo had a viral moment when Laura G caught him lounging in the litter box.

“Please don’t judge him; we all know how hard Mondays can be.”

By mid-June, all the kittens’ purrsonalities were starting to shine, and Beauty was a perfect mini-version of her brothers. Time Flies, But Homes are Forever

By late June, it was already time for the rascally brothers, Bingo, Bango and Bongo, to start looking for forever homes. Yet, for some reason, there was no interest through July. By that time, Beauty was also just about ready. 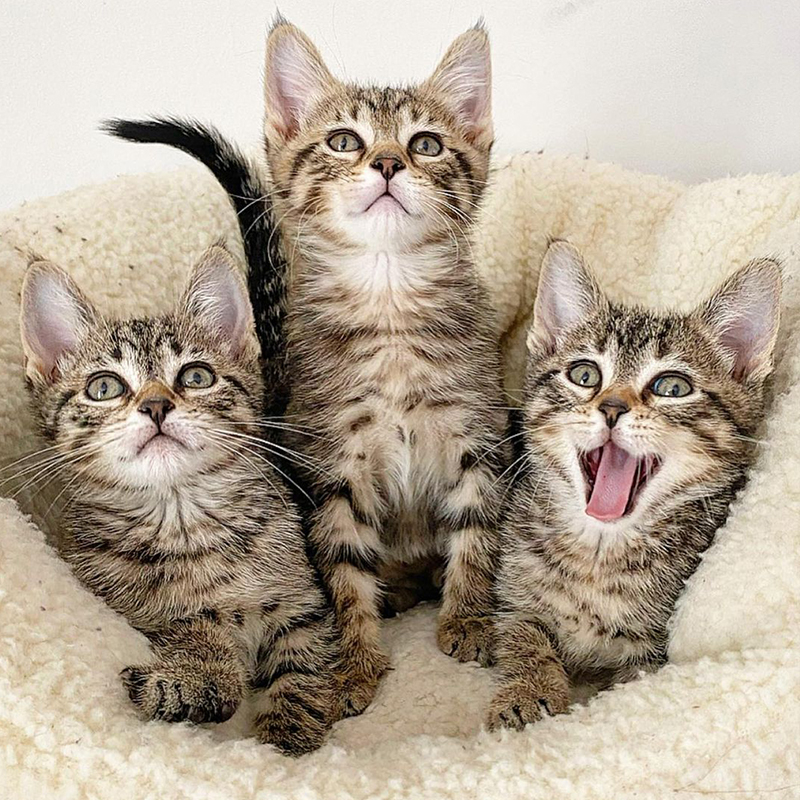 Bingo and Bongo Get New Names

“These 2 will now be named Bo and Luke… Them Duke boys are at it again 😉.” Now it was Bango and Beauty’s turn. Even though their mama Barbara would always be feral, they grew up to be cuddly, playful, and gentle.

“I knew right from day one that this crew of tabbies would grow up to be incredibly cute and cuddly, despite their momma’s fire. But even I didn’t expect them to be THIS good!” How time flies. It seemed like just yesterday when the four kittens were having a house party.

Recently we shared the funny story of Laura G’s fosters, Gator and Goose, two kittens who clashed in a kitten world war since they hadn’t developed social skills yet. They are still doing great and being hilarious.

For more, you can follow along and support Laura G on Instagram. Those in the Winnipeg area can contact Grateful Friends Animal Rescue about kittens and cats for adoption.