Kitten ‘Squeaky B’ Overcomes the Odds With Love From Senior Tomcat

Rescuers from Furget Me Not Animal Rescue in Edmonton, Alberta, shared the story of Squeaky Buttons, or Squeaky B, a black kitten who overcame extreme odds in so many ways.

Warning: Some images may be disturbing.

In late April, someone dropped the tiny kitten off at a pet store with an adoption center. They had found the 5-week-old Squeaky B by herself in a residential area.

At the time, the kitten had a serious umbilical hernia and probably wouldn’t have survived much longer on her own.

“She’s approximately 5 weeks old and has one of the largest umbilical hernia’s I’ve seen in my 23 years of rescue 😓,” said rescuer Christine. Although the tiny kitten’s hernia looked serious, the rescuer believed the veterinarians could get her patched without a problem. But first, they would need to give her some TLC until she was strong enough to undergo surgery and be spayed.

“We wish she could tell us her story, but we know it’s going to have a happy ending now!” the post stated. 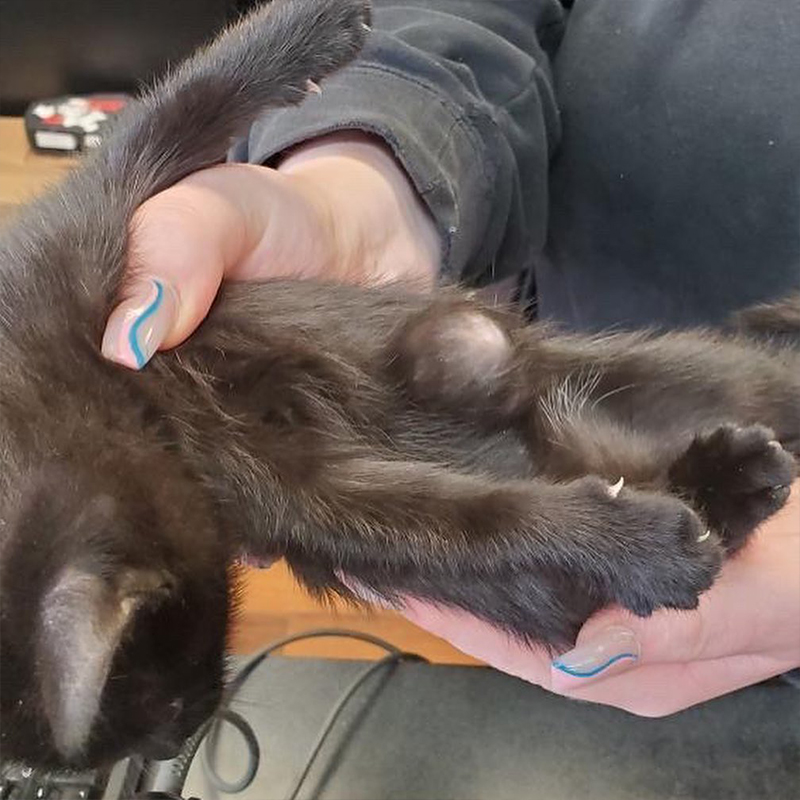 Squeaky B Rushed to Surgery

In early May, the rescuers discovered Squeaky’s hernia was much worse than they suspected. Then six weeks old, the kitten had to be rushed to the veterinarian for emergency surgery.

Since she was only around 600 grams, it would be risky but necessary to save her life. According to an update, the “superstar surgeon” was troubled when they found the hernia extended all the way up Squeaky’s chest cavity. To save her, they would essentially need to “put all her insides back where they belonged.”

“My awesome humans thought I had an umbilical hernia, but boy were they wrong. Dr. Boctor said I gave him gray hair when he opened me up! It turns out my hernia extended from my pelvis all the way into my chest. Can you imagine? My insides just never came together in utero and my guts were hanging out like nobody’s business.” Even though Squeaky B had to be patched up along her entire front, she amazingly made a rapid recovery. Her appetite was great, and she played “like a little monkey” soon after returning home.

“A few days post recovery and I’ve figured out how to get BOTH of my surgical sweaters off, and I’m partying like it’s 1999! And food, I’m eating alllll the food! Rescue mummy says she wants Dr. B to do her tummy tuck next 😝.” Thanks to generous donations, Squeaky would have a new life ahead of her.

“I still have a long road to recovery and a lot of growing to do, but we’re hoping I won’t need any more surgeries since they were able to do my spay at the same time. I’m expensive but worth it, don’t you think?”

Seeing the kitten pull through with such flying colors made all the effort worth it.

“Kitties like me are the reason we do this rescue stuff, right? 🥰” they wrote.

In recovery, Squeaky cuddled up with the shelter’s resident star, Grandpa Garth, a rescued senior tomcat.

The wise kitty is a gentle soul who loves caring for foster kittens. Once a stray cat on the street, the rescuers took Garth in and saved him from injuries of his own. Later they discovered the tomcat loves being with kittens. That’s when he became known as “Grandpa Garth,” and he has helped many hundreds in foster care ever since. Squeaky B with Grandpa Garth

You can see below how gentle and caring the senior kitty was with the little kitten as she recovered in foster care. By early June, Squeaky continued to heal like “an absolute star,” and was ready to find a forever home. Although she still had a small hernia in her chest, they expected her to live comfortably. The rescuers would pair her with a bonded friend to help her adjust to her new home. By late July, Squeaky Buttons was 3-4 months old and still searching for the right home. She had overcome so much and was a high-energy, playful, and loving kitten.

“Someone out there must be willing to take a chance on a sweet, affectionate, playful black kitty like me! I fought so hard to stay alive, I think I deserve a loving forever family like any other kitten, don’t you? ❤️” Finally, by August, Squeaky B found a home, and she was paired with a pretty calico named Whisp. The rescuers described Whisp as “a perfect, gentle little calico who adores the company of other kitties.”  Purrfect.

“Such great news!! Our survivor (naughty) angel baby Squeaky B found the perfect forever home! What’s even better is cutie Whisp will be joining her next week 🥰. Garthy is going to miss her, but she waited so long for a forever family; congratulations, sweet girl!”