Julia from Los Angeles posted a video of her foster kitten and a stuffed toy on Reddit (handle amjm907). When Julie took in the tiny ginger kitten, she felt bad that he was alone, so she offered him the toy cat. As you can see, the kitten bonded with it, licking it and cozying up to snuggle and sleep with it, just like a child with a teddy bear.

“I lost it when he started grooming it,” she said in a comment. In 16 days, the video received over 47K upvotes.

“Felt bad my solo foster didn’t have a friend, so I gave them one of my stuffed cats and…”

In a comment, Julia explained where the rescued kitten came from.

“This little nugget (name TBD) was found alone on the streets of LA, no mama or littermates nearby. My friend has a young cat that also needs a friend so they are planning to adopt him, just holding off until he’s a bit older and fixed/vaccinated. So I’m watching him until then!” So, unless this cute kitten becomes a foster fail (and she keeps him), he’s destined for another home. But, Julia says, the stuffed toy is definitely part of a package deal and will remain with the kitten.

“I’ve also already told the adopters about his new friend and they are on board to adopt both of them ;),” she wrote.

In a Newsweek interview, Julia said the kitten is her first foster although she says she has been a lifetime volunteer at shelters and rescues and works with animals professionally. Then, the kitten came into her life just when she had the time and was talking about fostering kittens over the summer. Thus, it all seems meant to be.

“It’s really funny actually, I had asked my boyfriend a couple of weeks ago how he’d feel about fostering kittens later this summer—he agreed and then 24 hours later a friend messaged me saying she knew someone that found a kitten with no mama or litter close by on the street, and she wanted to adopt him but couldn’t give him the attention he needed since he was so little. I took it as a sign and agreed to foster with my boyfriend’s blessing until he’s big enough, fixed, and vaccinated to go to their home with their other cat.” Although the kitten doesn’t yet have a name, Julia says that “right now Cheese is the top contender” on Reddit. Online, she’s happy to see so many people falling in love with the kitten and his stuffed toy.

“It makes me happy that people love the little guy as much as his adopters and I do! He brightens my day every day, so happy I could spread that joy a little.” Trading a Stuffed Toy for a Real-Life Friend

In addition to providing the little ginger “nugget” with a friend, the foster mom wanted to give him a wrestling buddy.

“He’s reached the stage where he’s getting super-playful now,” explained Julia: “[He] always tries to wrestle our hands so we wanted to give him a toy he could wrestle with.”

Plus, she understands the importance of socializing for young kittens. Often, it’s best to adopt kittens in pairs so they have an outlet for their wild playful energy.

“I also know young kittens do best with other kittens and should be adopted in pairs, or to a home with another cat because socialization is super-important when they’re young. Super-excited for him that he’s going to have a real-life friend soon!” Julia explained.

In another post, she shared a picture of the ginger kitten. Julia says the kitten’s name is to be decided but they are leaning to Cheese.

Along with the foster kitten, Julia also shares pictures of April, a cat who just had a birthday, turning 18 years old. Julia was six years old when she and her mom adopted April (then Smokey) from a shelter.

“April is 18 this month! 🥳 Made her a little cake to celebrate.” 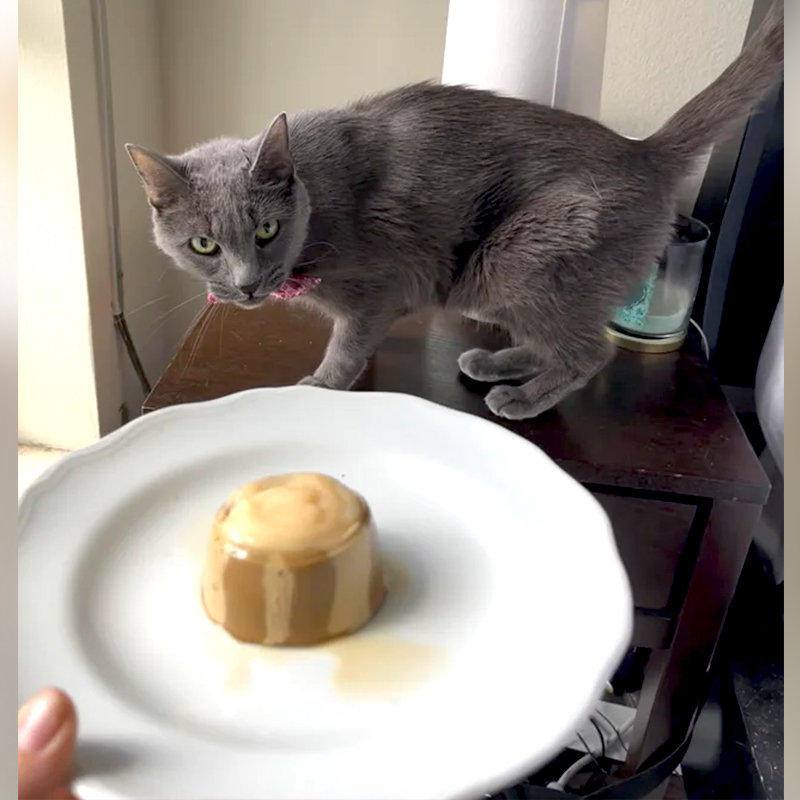