A simple video of a neighbor’s cat with a song, “Here comes the boy,” became an overnight sensation.

This time, a “snaggletooth” little man/cat later called The Boy was approaching on the street, prompting an impromptu soothing song of welcome. June’s comforting voice is like being “serenaded by a Disney godmother,” as one person put it. 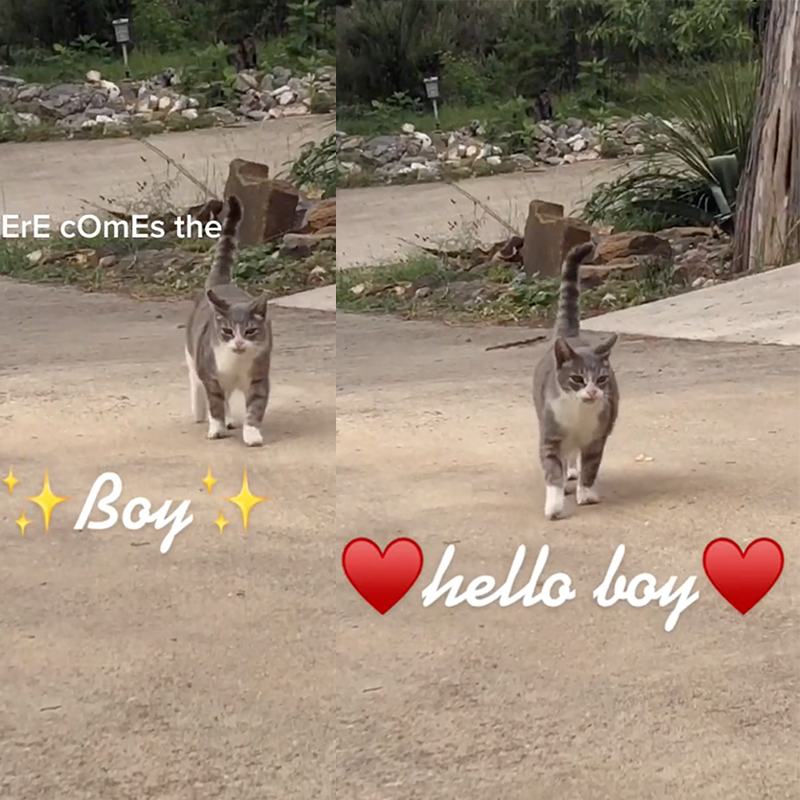 That was it in a nutshell, but people just LOVED it, spawning a music phenomenon, meme craze, and national news coverage.

To date, over 40.3 million have seen the simple, cute, and now classic TikTok. So, this kitty became woven into popular culture in 2021 in a magical moment.

“He lives down the road and we call him Mashed Potatoes,” reads the caption.

Something about the song and kitty seems to perfectly capture the essence of the pure joy between spontaneous cat and human interactions.

“Here comes the Boy, hello, welcome, there he is,” sings a laughing June as harps strum in the background. This kitty visits June regularly but stays inside at night. However, you can see the cat loves visiting to receive affection and treats from his admirer June.

In an update, we see “The Boy” a little better.

“:) I feel like you couldn’t see the full extent of his good looks in the other vid,” wrote June.

Everyone Wants More of The Boy

The video became so wildly popular that June posted regular updates for everyone wanting more of The Boy. However, there could never be enough.

For example, some wanted to hear the cat’s meows. In response, june_banooon says, “They are very short and grumbly.”

In other cases, June took people’s requests for a “girl version” of “here comes the boy.”

“Welcome to the porch my pretty lady. I’m glad you’re here, girl and you’re with me. Hey!” she sings for a little tortoiseshell kitty called Miss Spooky.

In another video, she sang a song for someone who requested a video for nonbinary people.

“There they are!! I found them!! Here they come my way. I’m so glad I found you for you just have made my day,” June sings.

Recently, The Boy returned for a Halloween video. June, dressed in costume, greets the kitty visitor at her door as the familiar harps play.

🥔 A Farewell to Mashed Potatoes 🥔

Recently, June announced on Instagram that the helpings of Mashed Potatoes were coming to a close.

“I don’t think I ever could have possibly imagined the kind of positive outreach that singing to Mashed Potatoes (Johnny) would have. It still blows my mind to think that people sing the little jingle to their pets and loved ones every single day, or have made it part of their routine in some form,” June wrote.

“Sadly, I’ll be moving away from this home very soon, and I won’t be able to supply anymore pictures of the handsome man himself.” So, we may not see more videos of the duo unless perhaps June visits her neighbors someday. Therefore, we’ll have to savor the moments June shared, which took off into an internet phenomenon.

“His owners are on the older side, and I don’t think they’ll be able to keep up the account. Thank you all so much for your sweetness, kind words, creativity, and genuine interest. I wish you all happiness from the bottom of my heart, and hope your lives are filled with joy.

Y’ALL ARE MAKING ME CRRRRYYYYYYY” In a final video, Mashed Potatoes, AKA The Boy, shares a bit of “infinite wisdom” on a sunny porch. Thanks to June for sharing this “Angel boy, sent from the heavens above to grace the presence of all human life.” He taught us to enjoy the little moments and – importantly – never take them for granted.

We wish June many wonderful memories in her new home and fortuitous Tarot card readings.