“Cat burglars, beware – the New Zealand police have a new recruit in town, and he’s not afraid to use his paws,” reported1News. 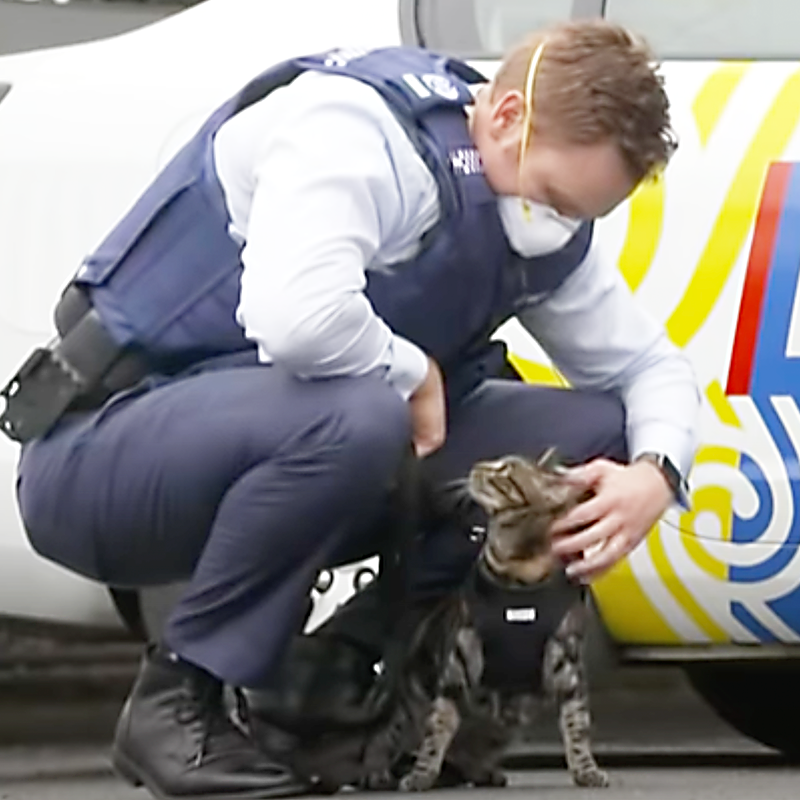 Recently, the country went into lockdowns due to the Covid-19 pandemic. So, for a bit of fun, they introduced Arnold wearing his police vest.

In a TV appearance, Sergeant Richards asked people to send in their cat pictures to be considered for the secret cat division.

“Send your pictures in to the police media team and I’m sure they’ll be considered,” he said. On social media, the Auckland City District Police made an announcement to lift spirits. In the video, Arnold shows off his skills, such as hoop-jumping or laying on his side on command. As you can see, Arnold’s training is quite impressive, achieved by offering his favorite dried beef and venison treats. Next, Arnold goes on a comical “tracking of baddie” practice at the local park.

See the video from 1News below:

“You will have heard about our Police Dog Section, but have you heard the whiskers about our Secret Cat Division? 👮‍♂‍” reads the Facebook post.

“For the cat lovers out there, meet Arnold – our Specialist Search Cat and latest recruit. Arnold’s trainer (whose identity we have to keep top-secret) has trained him to do all kinds of special tricks – he can even jump through hoops!”

“We hope his training video helps spread a bit of cheer and leaves you and your family feline a little better this lockdown (and yes, this was filmed before Alert Level 4).

Stay tuned for Arnold’s next adventure over the coming weeks.”

See the video below:

A ‘Bit of Joy’ During Lockdown

Richards says Arnold was a way to bring a “bring a bit of joy to people during these tough times” and was filmed just before lockdown.

In the comments, many people were delighted, with one person writing:

“Well, Arnold, what an impressive cat you are! I never thought I’d see the day that a feline would take a position as a CATstable and be WHISKAD up for such a career! It’s truly pawsable!!” Every day, Richards says Arnold is “really lucky” since he gets to stay home with his girlfriend.

As it turns out, Arnold is unlike many cats in that he’s not interested in hunting rodents and more focused on people of all stripes. So, if there were a real Secret Cat Division, he’d certainly be perfect for the job.

“He prefers just hanging out with us over hunting little animals,” Richards said.

“He’s more into baddies so he’s a people person as opposed to rodents.” While the Secret Cat Division catches cat burglars, other cats prefer a life of crime. Recently, we shared the story of two cat burglars in the habit of bringing home all kinds of treasures.

In other cases, cats have been known to thwart crime for real. For example, a declawed cat named Binky stopped a would-be burglar –with his fangs in Indianapolis.

Cynthia Kootz was at home when a burglar tried to break into her home. Then, Binky sprang into action, growling and biting the burglar repeatedly. As a result, the cat saved the day, and the police caught the suspect.

“The officers arrived just as the burglar decided Binky was too much for him and ran from the window right into the police,” reported WTHR.