Security footage from a family’s front door is going viral — and the reason why might surprise you. Mom Mandie Staretz (@muzicsmama) originally believed her kids were opening the front door and not bothering to close it. And no, she was not happy about this, so she kept grounding her kids.

Then someone took a look at the camera footage and realized there was a problem:

The kids weren’t the culprits.

Staretz has since uploaded the footage to TikTok and it’s gone viral — receiving 20,000 views so far. And the footage is pretty funny.

Alfy’s Ingenuity Was At Work.

Apparently, the family’s cat Alfy is a rather imaginative sort and he’d figured out how to open the door, Yahoo!News reports. Now, if you own cats, you already know they are intelligent little stinkers, so Alfy’s inventiveness may not seem unusual to you. And it turns out that our kitties’ brains are wired with nearly twice as many neurons as dogs, Mindmatters notes. Also, their cerebral cortex is more complex.

Perhaps that’s why cute Alfy was able to stroll up to the front door and pull down on the handle to let himself in.

Here he is, demonstrating his smarts below: 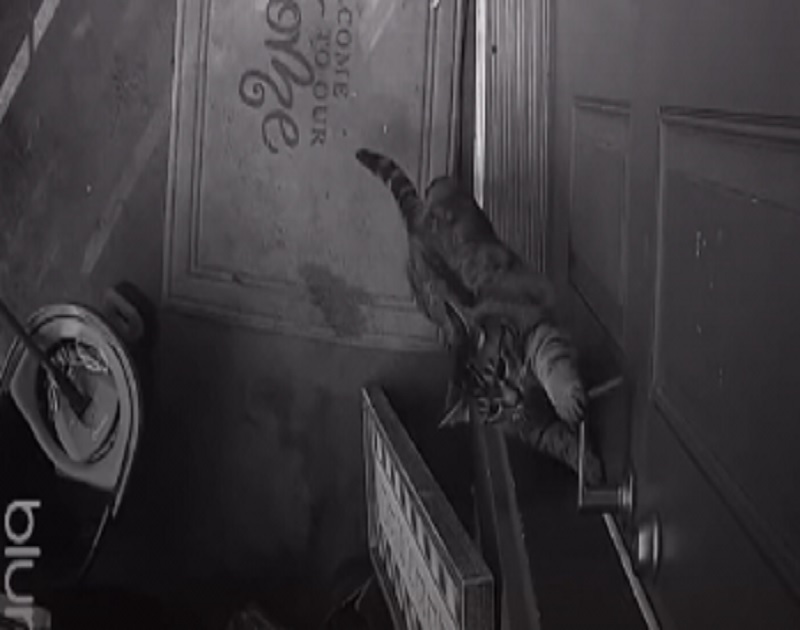 Perhaps Mom Needs To Buy The Kids Some Ice cream.

Alfy is clearly a kitty Einstein and in the caption to this funny video, Mandie notes this is definitely a #momfail. If her kids have seen the video let’s hope everyone’s had a good laugh. A little ice cream couldn’t hurt.

“Surface folding and brain structure matter more than brain size. Unlike the brains of dogs, the brains of cats have an amazing surface folding and a structure that is about 90 percent similar to ours,” according to Berit Brogaard, a professor of philosophy and the director of the Brogaard Lab for Multisensory Research at the University of Miami. “The cerebral cortex is greater and more complex compared to that of dogs. The cerebral cortex is part of the brain responsible for cognitive information processing. A cat’s cerebral cortex contains about twice as many neurons as that of dogs. Cats have 300 million neurons, whereas dogs have about 160 million. In fact, cats have more nerve cells in the visual areas of their brain, a part of cerebral cortex than humans and most other mammals.”

That intelligence may be the reason why some cats know how to make the softest bed possible:

And get themselves out of a jam:

Or find clever ways to steal their favorite snacks:

Or in Alfy’s case, open the front door. Like a boss.

“Now you just need to train your cat to close the door,” noted one.

“Hilarious our cats must be related our Simba does the exact same thing!! And we have cat doors yet he uses the actual doors.”

“I wish my cat knew how to do this, just with my bedroom door tho. He’s always meowing in the middle of the night for me to open the door.”

It took some pretty awesome feline ingenuity for Alfie to do this. We bet that Mandie’s kids are glad they aren’t in trouble anymore.